Gabriel Issa (left) speaking to Lebanes President Aoun. A photo used by Issa as a profile on his Facebbok page

BEIRUT — On Thursday, the Lebanese Cabinet passed long-awaited diplomatic appointments as President Michel Aoun called for “improving the state’s revenues” in the wake of parliament’s approval of a new wage scale for civil servants and the armed forces.

As per protocol, the names of the appointed ambassadors will be announced upon receiving approval from the nations to whom they’re allocated.

But news surfaced in Lebanese media and has been officially confirmed that the Lebanese government approved the nomination of Lebanese American Gabriel Issa to head the diplomatic mission in Washington, D.C.. 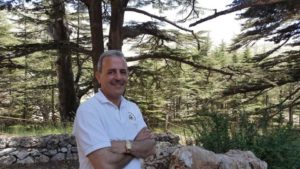 Issa, a long time resident of Bloomfield Hills, obtained his civil engineering degree from the Detroit Institute of Technology (DIT) in 1978. The ambassador designee immigrated to the U.S. in 1975. For decades, he owned and operated a successful multi-lingual translation and technical writing company.

Shortly before the election of former army chief Michel Aoun to the presidency of Lebanon last October, Issa left Michigan permanently to live in Lebanon, where he became a close advisor to President Aoun.

He is a strong advocate of the Free Patriotic Movements and one of its core leaders in America.

The political organization was officially established by Aoun after his return from exile in France in 2005. Aoun was forced into exile in 1990, but continued to lead a movement of Lebanese loyalists inside Lebanon and around the world. Issa was a major player of this political group before, during and after Aoun’s exile.

As soon as the news of his ambassadorial appointment became public, Issa’s Facebook page was filled with congratulatory posts and comments from around the world.

Issa and his wife, Bernadette, raised a family of four children while living in Bloomfield Hills.