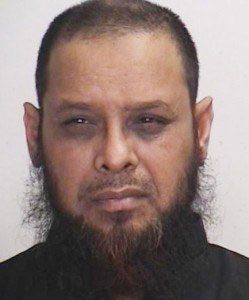 DETROIT — Describing the case as one of the “most horrible” sexual abuse trials he has witnessed, a circuit court judge sentenced Mohammad Masroor, a Muslim imam who was convicted last month of sexually abusing his nieces, to 10 concurrent terms of 35 to 50 years in prison and five concurrent terms of 10 to 15 years.
The defendant has 40 days to appeal the ruling. The sentence means Masroor will serve a minimum of 35 years in jail. He is now 50-years-old.
Masroor was found guilty of 15 counts of criminal sexual conduct by a jury on May 2 for sexually abusing his three nieces as children, when they lived in Detroit from 2000 to 2003.
Assistant Prosecutor Khalil Rahal said the prosecution is pleased with the sentence the judge handed to Masroor. “We are happy with the outcome of the trial,” he stated. “We feel that justice has been served adequately.”
Judge Michael Hathaway had allowed the three victims to testify while wearing the niqab, the Islamic face covering that conceals everything except the eyes. Hathaway commented on this decision during Masroor’s sentencing. The judge said it was easy for somebody of a secular mindset like himself to be dismissive of the girls’ niqab, “but that’s how they have been brought up, partly by the defendant.”
Hathaway said his decision on the niqab issue was “difficult.” He added that although the court is secular, it respects “the freedom of religion we have in this country.”
Although they were not required to reveal their faces, two of the victims took off the niqab while testifying in front of the jury. The judge said that decision is “evidence of how traumatizing this set of facts was.”
Hathaway said that all sexual abuse crimes involving children are horrible, but Masroor’s case stands out because he was the victims’ uncle as well as a religious leader.
Masroor denies the charges. Addressing the judge through a Bengali translator, he asked for “mercy” before sentencing.
The victims, none of whom lives in Michigan now, were not present at the sentencing. They reported the defendant to the authorities in 2011, after his own wife accused him of sexually abusing their biological children. Masroor was acquitted of similar charges in Toronto, Canada in March. He was extradited to the United States a day after his acquittal.
By Ali Harb