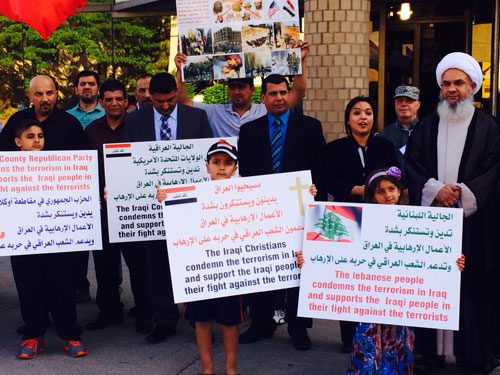 DEARBORN — “Right now in Iraq, Shia, Sunnis and Christians share the same battle against the ISIS terrorist group,” said Zuhair Alkhalteb, one of the more than 300 protesters attending a rally entitled “NO ISIS, NO TERRORISM,” Saturday, June 21.

The rally took place in front of the I.M.A.M building in Dearborn. Participants came from around the country and Canada.
The demonstrators’ message was clear:  People should reject sectarianism and that Christians, Sunnis and Shia are all one.
While ISIS has gained a stronghold in several major cities in Iraqi, Alkhalteb said he is not fearful of the militant group advancing in the country.
“I have faith in the Iraqi people and the Iraqi army,” he said.
During the rally people chanted, “Shia, Sunni unity.”
Protestors held up signs that read, “The Iraqi Christians condemn the terrorism in Iraq and support the Iraqi people in their fight against the terrorists” and “stop destroying Islamic heritage sites.”
Demonstrators encouraged people to use the hashtag #no2isis, and expressed a hope that it will begin trending on Twitter to send a strong message against ISIS terrorism to the world.
“All Iraqi people are one. They are all suffering,” said Nidhal Garmo, a Chaldean American human rights activist, who, since the start of the 2003 invasion of Iraq, has gone on several humanitarian missions to help needy people in that nation as well as those in other countries, including Honduras.
Garmo was born in Iraq and emigrated to the United States in 1980. She said that when she lived in Iraq there was no sectarian strife. For thousands of years Christians and Muslims lived peacefully together side by side.
“I came from Iraq years ago we didn’t have any problems with religious groups,” she said.
Speakers at the rally said young men should not attempt to go to Iraq and join the Iraqi army in its fight.
Garmo is the World Medical Relief’s (WMR) ambassador of Health. If people want to help Iraq, they can make monetary donations to the WMR, or donate clothes and toys.
Many demonstrators said the recent events in Iraq did not come as a surprise, because over the years the Iraqi government has not done enough to stop sectarianism in the country.
Other protestors said they were surprised and thought Iraq was beginning to rebuild itself.
“This was totally unexpected for the Iraqi government and the Iraqi people,” said Hyder Haddad, an Iraqi American. “I think we were shocked to see the heinous crimes committed against the Iraqis and the people in Mosul.”
The International Committee of the Red Cross in the past two weeks alone has distributed one-month food rations and other aid to more than 31,000 people displaced from Mosul. Similar distributions are continuing in other areas of the country.
“I strongly believe that Iraq will not be divided,” said Dearborn resident Huda Alnassiri. “They are trying to separate us, which won’t happen. The Iraqi people have been through a lot, we’re strong. We can take this on and unite.”
By Natasha Dado