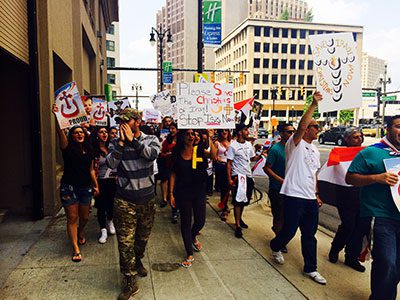 DETROIT — “I always wanted to go back and visit my hometown where everyone came from, but I can’t even go back,” said Evan Kajy, a Chaldean American. “A piece of me is now lost. It will always be gone forever. When I think about the fact that I can never go back and see the place where Iraqi Christians trace their roots, a piece of me is torn apart.”

Kajy was one of the demonstrators who participated in a rally for Iraq outside the McNamara Federal Building, Friday, Aug. 1. Demonstrators demanded security for Iraqi’s vulnerable minorities who have been persecuted and forced to flee their homes since the terrorist group ISIS gained a stronghold in the country’s second largest city, Mosul, nearly two months ago.
Iraqi Christians are the indigenous people of Iraq and speak Aramaic, the language of Christ. More than half of the Iraqi Christian community was forced to flee the country after the 2003 U.S.-led invasion, because of persecution. Today only a few hundred thousand remain, and their future is more uncertain than ever before.
“Today, I feel like I am a part of an endangered species that only has a few more years to live and then eventually die off,” said Noor Mattr, an Iraqi Christian. “Ladies and gentlemen I tell you today that I too have a dream that I can live in peace and harmony with my people back home and not worry about getting killed by terrorists. That I don’t have to worry about my children losing their heritage that dates back thousands of years; that my beautiful Aramaic language will continue to be spoken and stay alive.”
Organizers of the protest worked hard to promote unity among Iraqis of various religious groups. During the rally, shirts were distributed that featured the names and symbols of Iraqi religious groups. The shirt read:
“Resist. Unite. Armenians; Baha’is; Assyrian, Chaldean and Syriac Christians; Jews; Kakais; Kurds; Mandaeans; Shi’a and Sunni Muslims; Shabaks; Turkmen; and Yazidi. We Stand United Against the Destruction of Our Great Nation.”

Proceeds from the shirt sales will be given to a charitable group that is helping displaced refugees. About 200,000 Yazidis have left their homes in the sinjar region of Northwest Iraq according to reports. Leaders in the Yazidi minority community say women are being captured by the ISIS and forced to convert to Islam, marry jihadists or face other consequences.
Similar rallies were organized by Iraqi Christians in other states and around the world.
“I think what they are doing at this moment is trying to make everyone, including  Sunni, Shi’a and Christians, against each other,” said Asia Al-Hassan of Dearborn. “The ISIS people completely misrepresent Islam.” She added that she  doesn’t know where these people are coming from, “but they pretend and claim to ­­represent Muslims and Islam.”
Bianca Yaldo, a Chaldean who spoke at the rally, noted that minorities in Iraq are not the only ones facing persecution by ISIS. Others, including Sunni and Shi’a, have also been persecuted.
“Let each of us from all the different groups of Iraq, as pieces of the same country, come together to create a unified Iraqi population that voices the needs for everyone to acknowledge these atrocities and demand action,” Yaldo said. “These Muslims do not represent the attitudes and religious sentiments of mainstream Islam. They have hijacked this great Abrahamic faith.”
As protesters marched, they chanted, “we demand peace”, “give us back our land” and “stop ISIS now.”  They also held up signs that read, “Christian holocaust in Iraq” and “Nothing Islamic about Islamic state of Iraq.”
Ranna Abro, one of about 20 of the demonstration’s organizers, asked attendees to contact their lawmakers and urge them to take action and get involved in what is happening in Iraq. Congress is currently in recess, but will still be able to respond to messages when they return.
Abro said organizers of the rally are requesting the United States government to immediately begin a humanitarian campaign with the United Nations to address the potable water and electricity crisis affecting 400,000 minorities in the Ninevah Plains.
They are also demanding resettlements, reemployment and financial assistance from the Iraqi government in conjunction with the United States and United Nations for people who had no choice but to leave their homes immediately;
alternative educational opportunities for any students who are not able to return to the University of Mosul in the coming school year; asylum for any refugees who wish to flee the country and psychological relief efforts to be made for the persecuted populations.
“We don’t want you to just take us as refugees in your country, help us stay in our land,” said Mattr.
One of his cousins was forced to flee Mosul after ISIS gave Christians an ultimatum to leave, pay a special tax, covert to Islam or be killed. Mattr said when Christian families fled they were met by ISIS members at checkpoints and forced to give up everything they had, including cars, baby bottles, gold and money.
“To the Chaldean and Assyrian community of Michigan, enough with the division,” Mattr said. “You will never agree on everything. However, I beg you guys to unite for the sake of our people back home. Our survival back home depends on your unity here.”
Speaking at the rally, Mattr asked Chaldean and Assyrian organizations and individuals to collaborate on a system to send aid on a monthly basis back home.
Christianity has a deep rooted history in Mosul, dating back thousands of years, but today, for the first time in history, Mosul is empty of Christians. All 45 Christian institutions in the city have either been destroyed or are occupied by ISIS. The group also destroyed the tomb of the prophet Jonah and an 1,800-year-old church, as well as many Shi’a and Sunni places of worship.
“It is very hard and difficult for all of us,” said Mazyn Barash, a Chaldean American. “I don’t think it is just us. It is everybody. I came to America when I was only nine and that was in 1966. There was no tension between different groups of Iraqis. The only tension we had was with government; it was never with our neighbors. We lived happily and supported each other.
“I don’t believe that the United States is going to help them at all,” Barash added. “We talked about what Saddam was doing to his people. Look at what we have done, we left them all behind. We made it a lot worse, than it could ever be. It is done.”
By Natasha Dado