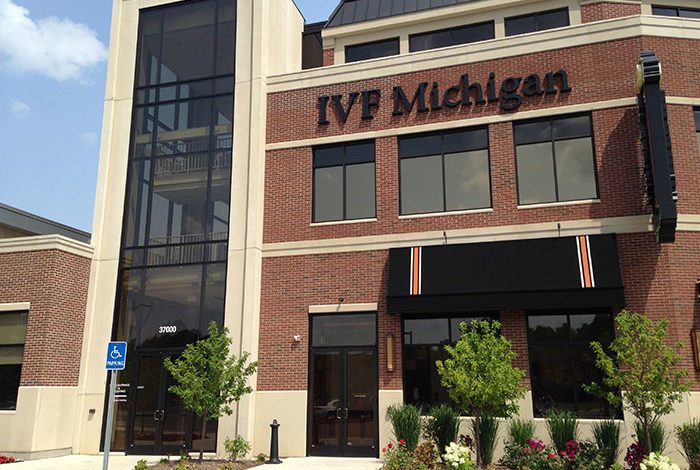 DEARBORN – IVF Michigan has officially begun its next chapter of expansion with the grand opening of its new state-of-the-art facility in Bloomfield Hills.
Currently operating five offices, IVF Michigan is the state’s leading infertility clinic and has brought joy to thousands of couples who were struggling with infertility.
With locations in Bloomfield Hills, Dearborn, Flint, Saginaw and Ann Arbor, the clinic specializes in all aspects of infertility care, including in vitro fertilization, consultations, ultrasounds, artificial insemination and infertility surgeries.
In vitro fertilization is the process of collecting eggs from the woman and sperm from the man and fertilizing them in order to create embryos that will be transferred to the woman.
Founded by Dr. Michael Fakih nearly two decades ago, the clinic’s success has even expanded outside of Michigan, with locations in Toledo and Dubai also in operation. This summer the clinic announced that Dr. Ahmad Hammoud , MD, MPH, is the latest fertility expert to join the team.
Dr. Hammoud told The Arab American News that he’s watched the success rate of in vitro fertilization nearly double in the last 10 years due to recent advancements in technologies.
“The success rate is almost 100 percent now,” Hammoud said. “Nowadays almost everybody can get pregnant. There’s been tremendous advances in the lab with culturing the embryos and limiting the risks.”
According to the latest data, 1 in 7 couples will struggle with infertility. The longer the couple waits to seek treatment, the more difficult it will become in the long run. Age may also be a major factor. A woman over 35 is more likely to lose fertility very quickly.
Hammoud said that if a couple has had no luck with conceiving a child after one year of trying, they should definitely consider seeking infertility consultation to determine the root of the problem.

However, many couples will avoid or delay seeking consultation due to a number of factors. These may include using alternative measures, such as home remedies, that often lead to  dead-ends or misinformation regarding expenses and insurance coverage for infertility care. Or it may even simply come down to a matter of pride.

“Most couples think they are the only ones dealing with this issue and that’s not correct,” Hammoud said. “The majority of couples who have difficulty with pregnancies don’t realize that their case is treatable. The most common mistake is that they wait a long time to seek help and that makes the treatment slightly harder and more expensive. Early help is the most beneficial avenue and leads to the highest success.”
In the local Arab American community, false stigmas may often times stray couples away from seeking infertility support. However, the clinic promises confidentiality, privacy and emotional support for patients who decide to seek assistance. Their procedures have also been approved by all religious authorities.
Hammoud said that in many cases, couples don’t realize that they may just need a simple surgery or treatment to course-correct a problem. In vitro treatment is the last solution on the list of many possible avenues. Often, it may even be a male-related issue that is delaying the fertilization process and the couple may have difficulty accepting it.
“We have to stress that this is a normal thing and it has nothing to do with manhood or womanhood or the ability to be a good husband or wife,” Hammoud said. “In vitro treatment is not the only option. There’s a [range] of treatments that we offer and we take our time to explain the circumstances to the couple to make sure that they are comfortable with the process.”
Hammoud has built quite an impressive resume in the medical field. After attending medical school at St. Joseph University of Beirut and obtaining is OB/GYN internship at the American University of Beirut, he came to the U.S. in 2001 and completed his residency at Wayne State University.
He then relocated to Salt Lake City to obtain a fellowship in reproductive endocrinology and infertility at the University of Utah. There, he would eventually become the medical director of the university for seven years and was involved in teaching medical education and conducting extensive medical research to treat male fertility. He has more than 30 publications and has been involved in more than 100 national research projects.
Hammoud returned to Michigan this year to join the IVF Michigan clinic, where he will practice out of the Dearborn office as well as help facilitate the expansion with the Bloomfield Hills location.
While patient treatment will be available at all of IVF’s locations, the new Bloomfield Hills center will now serve as one of the clinic’s main procedural locations, with an up-and-coming in-house embryo genetic testing laboratory set to operate there.  The facility houses the most up-to-date technology for embryo micromanipulation and sperm processing that includes temperature control and an air filtration system.
One of the latest technologies available at IVF is genetic testing on embryos, which can tremendously improve the health of the baby by screening chromosomal abnormalities well in advance and limiting the risk of a miscarriage or conditions that include Down’s Syndrome. In many cases, embryos are tested for hereditary diseases to ensure parents’ genetic conditions aren’t passed down to the child.
Another popular practice at IVF Michigan is one that is called “family balancing”, which allows couples to select the gender of their baby when they may already have children of one sex and are hoping to have one of the opposite sex.
Hammoud has spent years assisting couples and making their dreams a possibility. He said that no matter how many patients he has treated, there is still nothing more powerful than the moment when a couple hears their baby’s heartbeat for the very first time.
He recalls one case involving a 44-year-old patient who was told she had no chance of success using fertility treatments. Hammoud had suggested IVF Michigan’s genetic screening procedure to the patient. She underwent one cycle of treatment and IVF Michigan doctors were able to locate an embryo that was genetically normal. The embryo was transferred back into the uterus and the woman was able to get pregnant and deliver a healthy baby.
“There is nothing more beautiful than seeing their smiles on their faces,” Hammoud said. “It’s an extremely satisfying field to be in. Not only do we provide medical support, but we also provide emotional support. We provide these patients with optimism and hope. We have an extremely compassionate staff and we surround them around a very nice environment.”
For the first time ever, IVF Michigan is accepting all forms of insurance when consulting with patients. During the month of August, free consultation will also be available at the Dearborn location. For more information, patients can call the Dearborn office at 313.582.4333, or the Bloomfield Hills office at 248.952.9600. Visit IVF Michigan’s website at  www.ivf-mi.com.
By Samer Hijazi