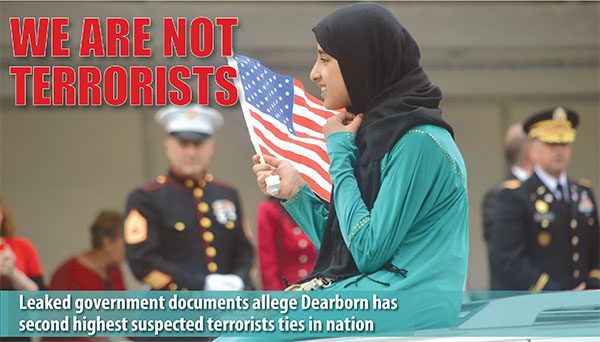 DEARBORN — Dearborn has the second highest number of “known or suspected terrorists” in the country, according to government classified documents published by The Intercept, an online news outlet that covers national security.However, 40 percent of people nationwide on the Terrorist Screening Database, which is a watch list of individuals who are— or could be— a terrorist threat, have “no recognized terrorist group affiliation.”There are more than 1 million people on the list, which is shared among federal government agencies and complied by the CIA, FBI and the Department of Homeland security.Federal agencies need mere “reasonable suspicion” to place individuals on the watch list. “Concrete facts” or “irrefutable evidence” are not required, according to the list’s guidelines, which were leaked last month.Dearborn has a population of 96,000. New York, a city of 8 million people, and Houston, with a population of more than 2.1 million, were first and third, on the list, respectively.The document also reveals that the terrorist screening system has expanded to its peak under the Obama Administration. There are 47,000 people on the no-fly list today— more than there have ever been during George W. Bush’s presidency.About 35 Arab American community leaders and activists representing several organization met at the Lebanese American Heritage Club on Thursday afternoon to respond to the disproportionate presence of Dearborn residents on the list.The organizations included The Arab-American Civil Rights League (ACRL), the American Civil Liberties Union (ACLU), the American-Arab Anti-Discrimination Committee (ADC), ACCESS, Council on American Islamic Relations (CAIR), and the Yemen American Benevolent Association (YABA).Congressman John Dingell and the Michigan Democratic Party Chairman Chairperson Lon Johnson also attended the meeting.Dingell said he would like to ensure the authenticity of the document and who is behind it before addressing the issue. But he affirmed his support for his Arab American constituents, pledging to work with community leaders on the issue and address the federal agencies responsible for the watch list.The Arab American News publisher Osama Siblani described the report as the most dangerous challenge for the community in his 30 years as a publisher.He said portraying Dearborn’s Arab Americans as terrorists drives business and residents out of the city.“Over the past two days, I have been getting phone calls from people telling me they’re scared,” he said.Rana Elmir, the deputy director of ACLU of Michigan, said the problem is not the leak but the bloated watch list, which violates our civil rights and makes us less safe.The meeting’s attendees decided to form a committee to follow up on the issue with Congressman Dingell. Siblani suggested suspending all meetings with federal agencies until the issue is addressed at the federal level.People at the meeting were split about this suggestion. It was eventually recommended not to meet with federal officials unless a congressional staffer is present.U.S. Attorney for the Eastern District of Michigan Barbara McQuade said she is still gathering the facts about the report but issued a statement defending the Dearborn community from the allegations on Thursday evening.“It is unfortunate that recent reports have suggested a negative perception about an entire community,” she said in a statement. “I can assure the public that Dearborn is filled with great American patriots — U.S. service members, police officers, teachers, lawyers, doctors, business people, laborers and good neighbors.  Efforts are underway to revise the existing redress process regarding the No Fly List.”Dawud Walid, the Michigan executive director of CAIR, said the news solidifies his conviction that the Department of Justice and the FBI considers Arabs and Muslims “perpetual suspects” of terrorism.”He said the federal government has “played a game” with our community by holding meetings with community leaders and talking about partnership while treating Arab and Muslim Americans as a threat.“Government statistics state that 94 percent of domestic terrorism comes from people who are not Muslim,” added Walid. “Therefore, we have to question why is Dearborn number two. Name me the Dearborn citizens who have committed acts of terrorism. Who has done it? No one.”Walid said the Obama Administration sees Muslims as “potential enemies of the state” because of their First Amendment right to follow Islam. “This is neo-McCarthyism,” he added.He said this type of news quells the community’s activism and political participation because it scares people, who already believe they are under the scrutiny of the federal government.“This information, and now it’s going public, further empowers anti-Muslim bigots and Islamophobes to target Dearborn,” he said. “In the recent years groups from the Westboro Baptist Church to Terry Jones come to Dearborn and make money, stating that Dearborn is a hotbed of terrorism, and the government is looking at us the same way that the Westboro Baptist Church, Terry Jones, Pamela Geller and other professional anti-Muslim bigots look at Dearborn.”Walid said the Arab and Muslim American communities should hold its own organizations accountable to how they deal with the federal government.“We have certain leaders who meet with the FBI and the Department of Justice and take photo-ops when the issues are getting worse for the community,” he said. “They are passively doing PR for the FBI that’s trampling on our rights. In order for us to get organized properly as a community, for us to take our concerns to elected officials, we have to first hold our leadership accountable for this counter productive community.”Walid explained that the expansion of the terrorist watch list and scrutinizing the Arab and Muslim communities are to justify the massive budgets of surveillance agencies.“[Intelligence agencies] have to show results,” he said. “People’s careers depend on this. The surveillance state is like a monster. Once it comes alive, it has to continue to feed itself for its existence.”