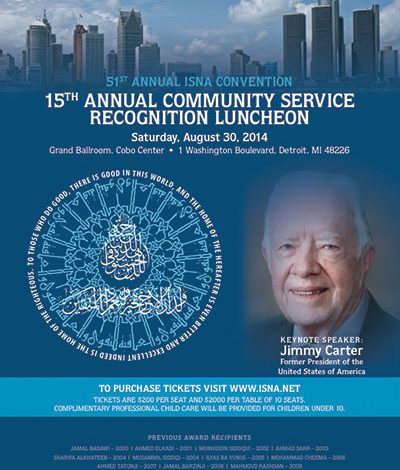 DETROIT — Former President Jimmy Carter will be the keynote speaker at the 51st Islamic Society of North America Annual Convention in Detroit on Saturday, Aug. 30.
The convention, which is usually held in Washington DC or Chicago, draws 15,000 to 20,000 people every year, according to ISNA Secretary General Hazem Bata. It is one of the largest Muslim American gatherings in the country. It will take place at Cobo Hall.
“ISNA is a non-sectarian, non-ethnic organization,” said Bata. “We do what we can to unite every kind of Muslim there is for the good of all Muslims.”
Carter is an outspoken critic of Israel’s occupation of the West Bank. However, Bata said the convention will be mainly a religious/ social event, even though it might address some political issues.
“We don’t want the conflicts overseas to dominate the conversation at the convention. We want to celebrate the successes of Muslim Americans,” Bata said. “ISNA has addressed those conflicts not from a sectarian or political perspective, but from a Islamic humanitarian perspective.”
He described Carter as one of the “most outspoken supporters” of Muslims.
“The fact that a former president is speaking at our convention is a tremendous testament to the work ISNA and Muslim Americans are doing,” Bata said.
Besides the former president, several prominent religious scholars will speak at the convention. There will be a bazaar and activities for children. Bata urged locals to turn out in large numbers at the convention.
“We did a study; the convention raises $20 million for the local economy between hotels, restaurants and shops,” he said. “If the convention is a success here, we will be back in the future. It’s a fun event for everybody, whether you’re very religious or liberal. It’s a family event.”
The three-day convention starts on Aug. 29. Tickets can be purchased on ISNA’s website, www.isna.net  or at local mosques.