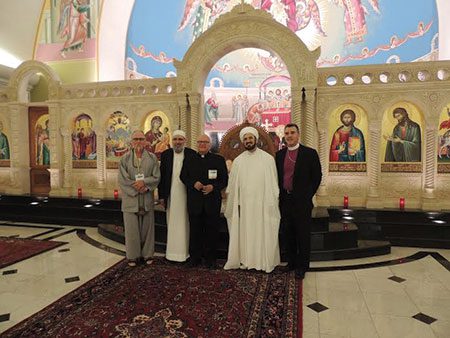 WARREN – At a press conference held on Wednesday, Aug. 13, The Imams Council of the Michigan Muslim Community Council (MMCC) condemned the continuing atrocities committed against religious minorities across Iraq and Syria by the Islamic State.
The imams also denounced the Israeli assault on Gaza during the conference, which was held at the Islamic Organization of North America in Warren.
The Islamic State, formerly known as the Islamic State in Iraq and Syria (ISIS), is a group of religious extremist militants that declared a caliphate in parts of northern Iraq and eastern Syria.
The Imams Council, which includes both Sunni and Shi’a scholars, seeks to “promote unity and cooperation among the diverse Muslim communities, cultures, ethnic backgrounds and races by convening and mobilizing the Muslim community.”
It is co-chaired by imams Mohammad Elahi, the spiritual leader of the Islamic House of Wisdom, and Mustapha Elturk, the spiritual leader of the Islamic Organization of North America.
In a statement read by Elturk, the council stated that it rejects the caliphate proclaimed by the Islamic State.
Quoting several verses of the Qur’an, the statement said that Islam unequivocally bans murder and driving people out of their homes.
“ISIS’ actions of mass executions, ethnic cleansing of the Christians and other religious minorities, desecration of shrines, mosques and churches are against the teachings of Islam,” said Elturk. “The Imams Council equally condemns the carnage that has unfolded in Gaza, due to disproportionate attacks by the Israeli forces. Eighty percent killed were women and children— an intentional and systematic violence against the Palestinian people. This contradicts clear spiritual obligations in the Jewish faith.”
Elahi urged American Muslims to participate in events that denounce the Islamic State.
“I invite Muslims to show solidarity with the Christian community suffering in Iraq and Syria at the hands of the evil criminals of ISIS,” he told The Arab American News. “The entire Muslim community here is against ISIS. Muslims in general are for peace and justice. The immorality and barbarism of ISIS have no place in our faith.”
Elahi added that interfaith dialogue is a vital need at this point, noting that he and Elturk prayed at St. Mary’s Orthodox Church in Livonia with the pastor, the Rev. George Shalhoud.
Elahi compared the atrocities committed in the name of Islam by the Islamic state to the massacres committed by Israel in Gaza.
“Whether murder is committed by the Islamic State or the Jewish State, it’s a human tragedy. It has nothing to do with religion,” he said.