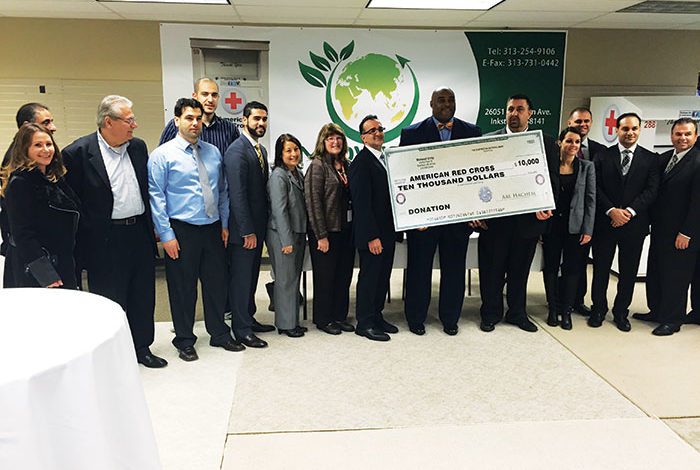 DEARBORN — On Monday, November 24, the American Red Cross Southeastern Michigan Region held a press conference at the warehouse of Midwest Recycling, a clothing and shoes recycling company, to announce a new and unique partnership for the next three years.

Founded by Abe Hachem, Midwest Recycling places bins across metro Detroit for the collection of used clothes and shoes. A staff of 30 people then collect the items and bring them back to the warehouse in Dearborn, where they are sorted and shipped across the world.
In the past, Hachem has distributed clothing items across 20 countries and four continents, including Eastern Europe, Asia Africa and Central and South America.
On October 1, the company officially began its partnership with the American Red Cross and had all of its bins converted to include that organization’s logo. Midwest Recycling officials said they’ve seen about a 20 percent increase in donated items since affiliating themselves with the Red Cross.
While the American Red Cross does not collect clothing or shoes for distribution, it will benefit from quarterly donations from Midwest Recycling, based on the poundage of items that were donated into the bins.
Midwest Recycling kickstarted the financial donations with a $10,000 check written out to the American Red Cross. The company pledged to donate another $25,000 by mid-2015.
Attorney Ali Hammoud, who works closely with Midwest Recycling, said the two agencies began coordinating an effort to build a partnership last spring. Over the summer, they were able to finalize a contract that would see the program last for three years.
“We thought it would be a great idea to partner up with the American Red Cross and give them a percentage of what we actually collect. It’s going to be a great partnership,” Hammoud said.
American Red Cross Southeastern Michigan COO La Forice Nealy said the organization has been collaborating with companies across the country with similar programs. He added that the partnerships are of great assistance, especially in times of need, citing the recent August floods that occurred across metro Detroit.
“It certainly is an honor to establish a partnership where we can do something that is positive and will have a good outcome for people,” Nealy said. “We want to make sure that people are taken care of and this partnership allows us to recruit volunteers who will help us respond to disasters, whether it’s a home fire or the floodings like we experienced in August. The Red Cross plays a very important role in helping the community prepare for these events.”
At the gathering, American Red Cross affiliates also expressed interest in building a stronger relationship with the Arab American community.
Nealy said the program with Midwest Recycling will be an avenue to build more ties with local residents. He also expressed interest in finding community members who could potentially be on the organization’s board.
“I’m hoping this will lead to other opportunities where I can speak about what the Red Cross is doing on a regular basis and maybe there will be an opportunity to grow our partnerships into more volunteers, more blood drives and ultimately in the future, some community leader could be on our board,” Nealy said. “We have to reflect the communities that support us and I’m committed to working on that.”
While the partnership with Midway Recycling has already included more than 300 bins in metro Detroit, none of those bins are currently in Dearborn.
Midwest Recycling said it is in the process of working out details with city officials to include the program here. Dearborn City Council President Susan Dabaja and Councilman Mike Sareini were also in attendance to support the initiative.
Midwest Recycling said that additional bins are being placed around the region on a weekly basis and that the company is aiming to have 350 bins by year’s end. New locations are also being sought and if business owners are interested in having bins in front of their stores, they can contact Midwest Recycling at 313.304.9099.
Retail locations with large parking lots are the best location spots for the bins, in order to provide easy visibility and accessibility. Grocery stores, shopping plazas and gas stations are currently the most frequently used locations. For more information on the Red Cross-branded Midwest Recycling bins, residents can contact Hachem at midwestfootwear1@gmail.com.
By Samer Hijazi