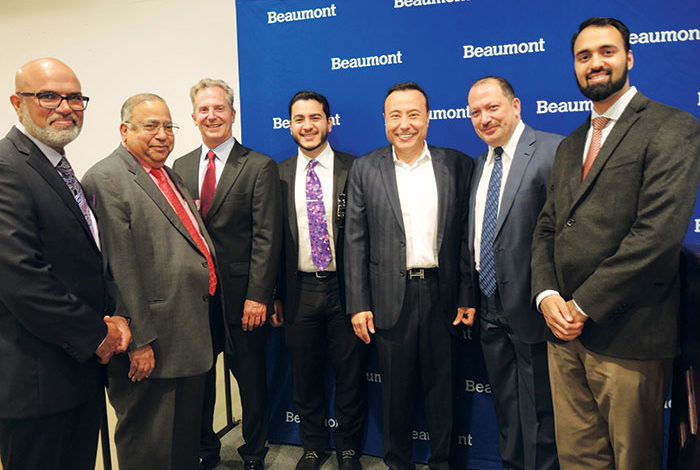 Hospital officials said the purpose of the iftar was to bring the community together for more understanding about Ramadan and the Islamic faith. It was also an opportunity for colleagues to spend time together in an environment that is meaningful to a significant population of the health care system.

Zulqifar Ahmed, the physician in charge of the dinner, said that aside from an opportunity to break their fast, the event was a way for staff members to get together in an informal setting as a team-building activity.

To him, the dinner was a way to “share common values and find common grounds” with fellow Muslim and non-Muslim colleagues. They shared

Ramadan experiences and what fasting meant to them, giving others a look into the spiritual activities of their colleagues.

Ahmed said his faith helps him be a better physician and that he hopes the event “will sharpen the ethical aspects of everyday medical practice.”

As a doctor who is regularly involved in the well-being of patients, Ahmed said the Islamic values of empathy, listening carefully and treating them like human beings are qualities that coincide with Beaumont’s values.

Abdul El-Sayed, executive director of Detroit’s health department and the keynote speak at the iftar, said his talk was about dignifying the spiritual aspects of health care. In a field where physicians take on great responsibility, conduct medical exams and procedures, El-Sayed said the work of medicine is the work of a caregiver.

“There is a dichotomy, a void for those who practice medicine,” El-Sayed said.

Ultimately, he hopes that heath care professionals will incorporate or at the very least take moments throughout their work days to recognize the spiritual
aspects of their work.

El-Sayed added that Beaumont, which is in the business of saving lives, share common principles with Islam and other major faiths. Furthermore, Islam values diversity, excellence and equality.

“These are values that Beaumont hopes to embody in their work,” he said.

He lauded the hospital’s administration for hosting the largest event of its kind, recognizing the Muslim constituency in Detroit, including the physicians who organized the dinner.

“It was nice to see a good number of attendees among Beaumont leadership and others who are standing in solidarity,” he said.