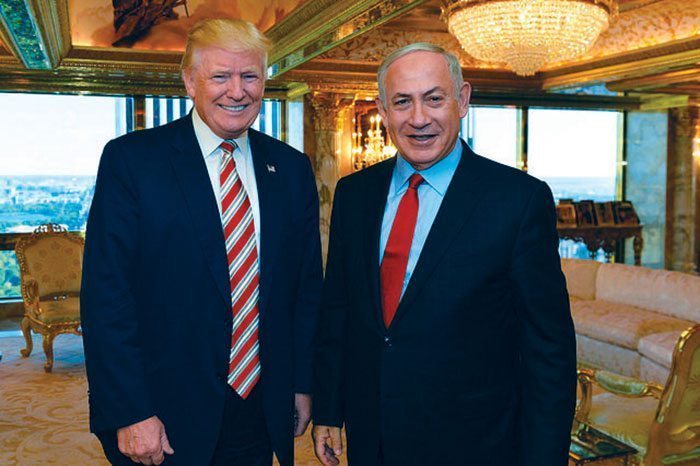 Fear and trepidation are slowly building up, as U.S. President-elect Donald Trump is fortifying his transitional team with people capable of bringing about a nightmare scenario, not only for Americans but for the rest of the world as well.

For Palestinians, however, the signs are even more ominous. From former New York Mayor, Rudy Giuliani, to Republican leader Newt Gingrich, the Trump team is filling up with dishonorable men who have made careers out of pandering to Israeli interests and unabashedly discounting Palestinian rights.

While Gingrich had claimed in 2011 that Palestinians are “invented” people, Giuliani, according to Jewish News Service “is fondly remembered in the Jewish community for expelling Palestine Liberation Organization (PLO) chief, Yasser Arafat, from a United Nations concert at Lincoln Center in 1995.”

Considering earlier statements made by Trump himself last May – that the expansion of illegal Jewish settlements in the Occupied West Bank ‘should keep moving forward’ – to more recent comments by Trump’s point person in Israel, Jason Greenblatt, that the illegal colonies are “not an obstacle to peace”, it is fairly certain that the Trump administration is decidedly anti-peace and anti-Palestinians.

Israeli officials are, of course, rejoicing at the opportunity of working with such an administration, with Education Minister Naftali Bennet celebrating the “end of a Palestinian state” era and Defense Minister Avigdor Lieberman inviting Trump to ‘coordinate the development’ of the illegal
settlements.

But the media forecast for the next four years in U.S. foreign policy towards Palestine and Israel is also prejudiced. It is true that Trump’s prospective line-up of old politicians is not conducive to the achievement of a just peace in Palestine by any stretch of the imagination, but presenting the news as if the prospects of a thriving just peace had existed under the administration of Barack Obama is simply laughable.

The Obama administration, despite the uneasy relationship between President Obama and Prime Minister Benjamin Netanyahu, has been one of the friendliest and most generous towards Israel. Obama has remained steadfast on Israel’s side as they both fought against Palestinian political aspirations in international institutions.

So those worried about things getting worse for Palestinians under a Trump presidency can take comfort in the fact that they already have.

But will this impact the American position towards a Palestinian state?

Not in the least because, again, Obama, like his predecessors fought tirelessly to prevent a Palestinian state from ever taking form. If a distinction is to emerge between the Obama and Trump administrations, it is likely to be manifested in rhetoric, not in action: the former refined and articulate, the latter belligerent and demagogic. Either way, Palestinians lose.

In his last speech before the United Nations, Obama dedicated a single sentence to the Palestinian-Israeli conflict – a sentence that accurately reflected his failure to positively affect the outcomes of the Middle East’s most protracting, destabilizing conflict.

Both sides would “be better off if Palestinians reject incitement and recognize the legitimacy of Israel, but Israel recognizes that it cannot permanently occupy and settle Palestinian land,” he said. Nothing more.

While his previous speeches dedicated much rhetoric to the conflict in Palestine and Israel, the last U.N. speech – and that sentence alone – was a more honest indication of eight years that lacked vision, or even a sincere attempt at finding one.

Over that eight-year period, during which time thousands of innocent people – the vast majority of whom were Palestinians – were killed, Obama purportedly labored to achieve the proverbial, although misleading, “middle ground”. The outcome of his policies were quite devastating, whereas he sold Palestinians false hope, he granted Israel most of its needs of military funding and technology, shielding it from international censure, too.

Moreover, during the last Israeli war on Gaza in 2014, which killed and wounded thousands, Obama ensured the Israeli army’s storage of ammunitions and military hardware remained at full capacity.

On the political front, he ensured Palestinian efforts aimed at obtaining recognition for their future state were soundly defeated. He went as far as denying the U.N. cultural organization, UNESCO, nearly a quarter of its funding simply for admitting “Palestine” as a new member.

Yet, some are, naively, hoping that Obama will seek recognition for the State of Palestine at the UN Security Council in his remaining weeks in the Oval Office. These hopes have been buoyed by media reports that Obama had instructed the State Department to develop an “option menu” regarding his vision for a resolution to the conflict.

While Palestinians and their supporters are optimistic that Obama will redeem himself, even if symbolically, and support the Palestinian push for statehood, Obama is unlikely to carry out any such steps, especially since Trump is bound to defeat such initiatives once he moves into the White House.

Additionally, the soon-to-depart president has had eight full years to show real grit and to take advantage of his first-term popularity to challenge the pro-Israel lobby and present his country as a truly “honest broker” in an unequal conflict. He could have, at least, sided with the majority of humanity by adding his country’s voice to those that recognize a Palestinian state at the United Nations.

As of September of last year, 139 of the UN’s member states (and two non-member states) have recognized Palestine. But those recognitions remain largely symbolic as long as the U.S. is unyielding in its rejection of Palestinian aspirations. An unwavering supporter of Israel, the U.S. is not only blocking  full Palestinian membership at the U.N., but is doing its utmost to prevent “Palestine” from gaining access to international institutions.

Regardless of what position is to be recommended by the State Department to Obama in his final days in the White House, the misfortunes of the Palestinians are unlikely to be reversed overnight or in the foreseeable future. Judging from Trump’s friendly overtures towards Israel -for example, inviting Netanyahu and his wife to visit Washington shortly after winning the election – the immediate future does not look promising.

History has taught us that, when it comes to U.S. foreign policy towards Palestine and Israel, things are likely to get worse, not better. Despite the current chasm within American society, among the media and political elites, the American love affair with Israel will continue. The ongoing war on Palestinian rights and aspirations will also linger.

The Palestinian leadership seems unable to understand such an obvious reality. The Palestinian Authority in Ramallah is either unaware or, perhaps, oblivious to the fact that its salvation will not arrive from Washington, but from its ability to navigate the U.S.-Israeli alliance in a resolved and united manner.

Indeed, regardless of what position Obama – or even Trump – may or may not take, it will have little bearing on the outcome if Palestinians remain divided. Far more significant than the inflammatory drivel of Gingrich and Giuliani, Palestinian division and their inability to confront the Israeli occupation with one unified and daring strategy is Palestine’s greatest, and most pressing challenge.

-Dr. Ramzy Baroud has been writing about the Middle East for more than 20 years. He is an internationally-syndicated columnist, a media consultant, an author of several books and the founder of PalestineChronicle.com. His books include “Searching Jenin”, “The Second Palestinian Intifada” and his latest “My Father Was a Freedom Fighter: Gaza’s Untold Story.” His website is www.ramzybaroud.net.