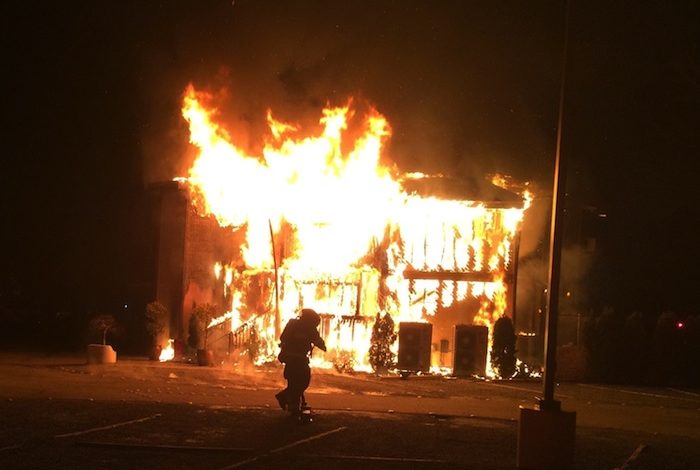 SEATTLE, WA – A homeless man suspected of setting fire to a Bellevue mosque on Saturday, January 14 was charged with second-degree arson Tuesday by the King County Prosecuting Attorney’s Office. Bail was set at $1 million.
who has an extensive history of mental illness and property damage, was found in a parking lot behind the Islamic Center of Eastside, staring at the fire, according to charging documents. When approached by police, he calmly said, “I did it,” the documents say.
A man with clothing matching Wilson’s was also seen on the mosque security cameras approaching the northeast corner of the building at 2:38 a.m. Saturday with a plastic jug. Moments later, smoke and large flames obscure the camera view, according to the charging papers.
No one was injured in the blaze, but it destroyed about half of the two-story wooden structure in the Lake Hills neighborhood, said Lt. Ryan Armstrong, spokesman for the Bellevue Fire Department.
The 1978 building was valued at $1.2 million in 2016, according to county property records.
Police have said there’s no indication that the fire was a hate crime or related to terrorism. Wilson has previously been charged in connection with a July altercation at the mosque.
On Tuesday, people left flowers, balloons and written words of support on the sidewalk outside the burned mosque. One sign said, “We stand UNITED with our Muslim neighbors.” A globe, encircled with red-paper hearts, bore messages including, “We’re better together.” A Bellevue police cruiser was parked in front.
Sunday night, about 500 community members packed an auditorium at Sammamish High School to show their support and learn more from police and city leaders about the crime.
“The outpouring from the community is tremendous,” said Mayor John Stokes. He said the city, the Bellevue School District and a number of churches are trying to identify an alternate worship site for the mosque, where about 1,000 people pray each Friday.

Trump must give his tax returns to NY prosecutor, judge rules

Subdued atmosphere dominates protest in front of the Lebanese embassy in Washington, D.C.