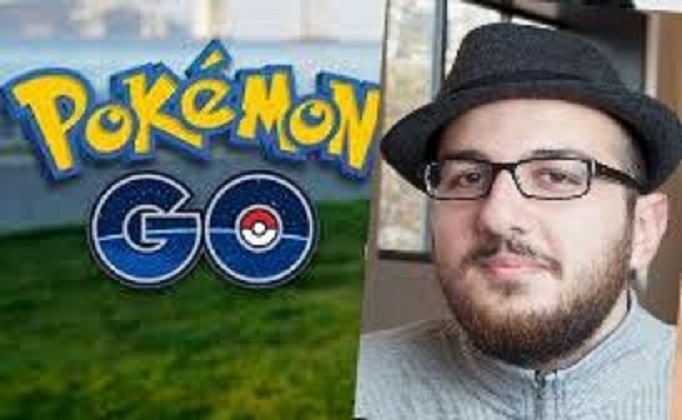 Beirut native Khaled Abdel-Rahman
REDWOOD CITY— Beirut native Khaled Abdel-Rahman, who came to the U.S. on a student visa to earn his master’s degree in computer science from the University of Southern California, has made the 2017 Forbes 30 under 30 games list.
Only 25-years-old, Abdel-Rahman has worked on the concept and design for the worldwide hit mobile game Pokémon Go. He has also been working as project manager at Google for almost three years and as a part-time lecturer in game development at USC for two years.
Ever since he was a kid, gaming interested him, but he never knew the many job opportunities available until he read an article entitled “So you want to be a game designer?” 12 years ago.
“That article was kind of a big insight for me,” he said. “That’s when I figured out this is an actual job that people want to do and I pursued it all the way through.”
Abdel-Rahman decided to major in computer science at The American University of Beirut since it’s a field that involves software development.
“I was an average student at best throughout school,” he said. “But the moment I was doing something I enjoyed at AUB, I was on top of my class the whole time.”
From there, Abdel-Rahman and a couple of his classmates created a game called “Turn on the light”, which won a Lebanese Local Imagine Cup and was a finalist in the Worldwide Imagine Cup 2012.
After receiving his bachelor’s degree, he decided to study abroad at USC for graduate school.
In 2014, he received a scholarship to attend the conference called DICE, which is usually for high level experts in the game industry. There, he met John Hanke, founder and CEO of Niantic, Inc., a software development company.
“I showed him my game “Bloom” that I worked on at USC,” he said. “A couple weeks down the line, he scheduled an interview and hired me for his team. One of my first responsibilities was working on the initial concept and the mechanics and the design of Pokémon Go.”
According to an Apple press release, Pokémon Go was the most downloaded app in the Apple Store for 2016.
Abdel- Rahman expected the mobile game to achieve success, but not to the extent it did.
“It was crazy,” he said. “I expected the game to be big, but not nearly as big as it was. We had really high hopes and really big numbers to achieve, but we blew those numbers out of the water.”
As for his teaching job at USC, Abdel-Rahman said he really enjoys helping his students reach their dream jobs. He said most of them think the professions they want to pursue are very distant, which is exactly how he felt when he was in their shoes.
“I’ve had students who literally said, ‘I want X job at this studio,’” he said. “And after my course and the couple of years at USC, they get the exact job that they’ve been looking for. It’s just great to see a lot of students email back to thank you for the help. In a sense, I want to help others achieve what I thought at some point was pretty distant.”
Abdel-Rahman said many of his students are older than him and tend to think they could never accomplish what he has.
“I try as much as possible to reassure them that it’s not that hard if you put your mind to it and if you work towards it,” he said.
When asked about his job at Google, he said he likes that it’s a learning experience and that he has worked on lots of diverse projects involving different ways of developing.
“The moment you’re not learning in your job, that’s the moment it becomes unenjoyable,” he said.
However, Abdel-Rahman won’t stop there. He plans on progressing because he knows that he can offer so much more in the gaming world.
He said people see him getting on the Forbes 30 under 30 list as a huge achievement, but he doesn’t.
“There’s still quite a bit of things to do and achieve,” he said. “And hopefully I can continue to have impact in the game space. In reality, all I ever wanted to do is to just make games; and I think it’s because I focused on that, success landed my way in a lot of areas. I think a lot of people could do the same. It feels great getting recognition for some of the work that I’ve done.”