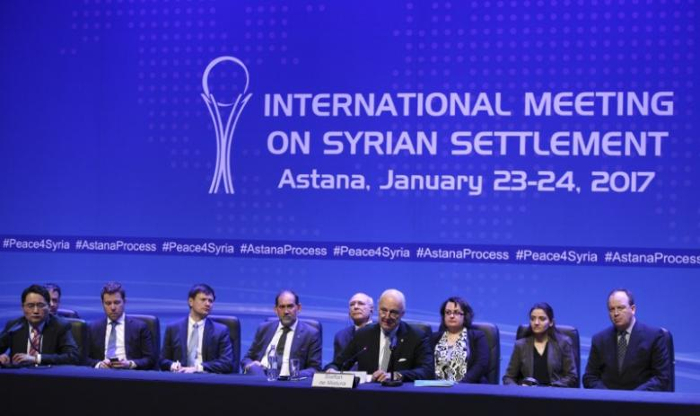 ASTANA ― Syria’s warring sides met for their first talks in nine months on Monday, with their Russian and Turkish backers pushing to cement a ceasefire that could pave the way for political talks.
The meeting in the Kazakh capital comes at a time when Turkey, which backs the rebels, and Russia, which supports Syrian President Bashar al-Assad, each want to disentangle themselves from the fighting.
That has led them into an alliance that some believe represents the best chance for progress towards a peace deal, especially with the U.S. distracted by domestic issues.
After facing each other to make opening remarks on Monday, the rival delegations spent the rest of the day negotiating indirectly through intermediaries and at times trading barbs. But the rebel side expressed optimism about Moscow’s position.
“We noticed a real understanding on the part of the Russians,” Yahya al-Aridi, an opposition spokesman, told reporters.
“We understand that militarily they have achieved what they wanted in Syria. Now they want to translate this military achievement into some sort of political deal. That has to be a ceasefire.”
Diplomats said Russia, Turkey and Iran were working on a final communique that could be completed as early as Tuesday. It would reaffirm a Dec. 30. ceasefire that each side accuses the other of violating.
Russian news agency TASS cited an early draft communique as saying Moscow, Ankara and Tehran would commit to jointly fighting Islamic State and Jabhat Fateh al-Sham, the militant group formerly known as Nusra Front. They would set up a mechanism for trilateral monitoring of the ceasefire.