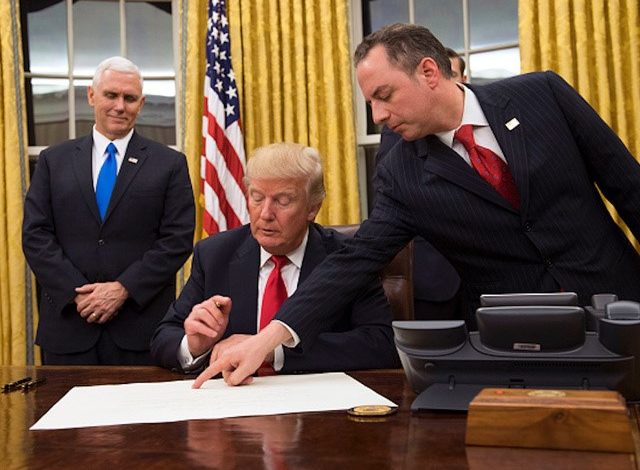 Applauding Trump’s order was the North Dakota Petroleum Council’s president, Ron Ness, who said, “We think this is a great step forward in energy security for America.”

Two days prior, on January 22nd, Trump enforced a rule designed to block U.S. aid to foreign non-governmental organizations that use funds for abortion and abortion related services.

The executive action, called the Mexico City Policy, was put in place originally by the Reagan Administration and repealed by Obama administration in 2009. The policy faced numerous repeals by typically Democratic administrations as well as cyclical reinstatements by subsequent Republican administrations.

Another executive action Trump completed within his first week was pushing back parts of the Affordable Care Act. Within his first day of taking office, he signaled an order stating that his administration’s official policy consists of seeking “the prompt repeal” of the Act that dismantles the Health Care law that affects 20 million Americans.

He also excuted an immediate reversal of Barack Obama’s mortgage free premium cuts, a legislation that had been instilled to assist first-time homebuyers and the working class.

With Trump now in the White House, Republican legislators now look forward to passing proposals that have previously been declined or faced difficulty under the previous Democrat-controlled Administration.

Trump is also expected to sign executive orders on immigration Thursday, restricting entry to residents from seven Middle Eastern and North African countries as well as refugees. He also signed executive actions enabling the construction of his proposed wall, as well as one to defund ‘sanctuary cities.’