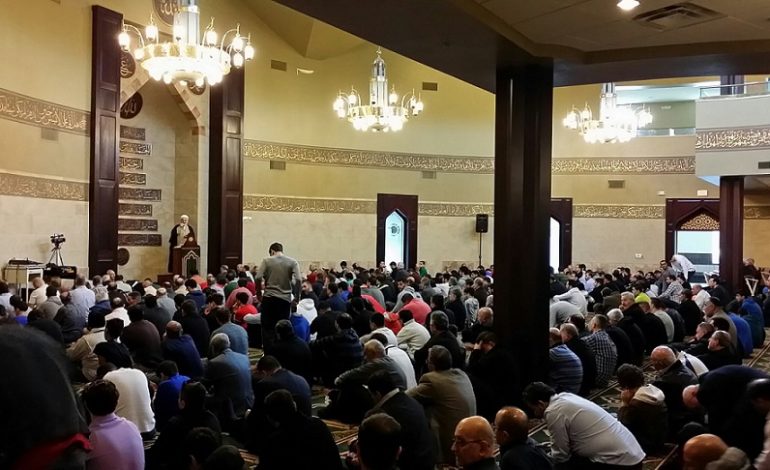 Friday sermon at the Islamic Center of America

DEARBORN— In today’s political climate, many people overlook the difference between the “religious” and the “fanatical”, as the media often hastily interlaces those terms when it comes to Islam.

Western media have regularly designated persons who allegedly follow Islam and have committed atrocious crimes as Muslims in headlines, while criminals and terrorists who follow other faiths are not branded by their religions.

This has evidently led Westerners to believe devout Muslims are indistinguishable from the fanatics who claim to follow that religion. It’s a false equivalency not unlike comparing a devout Christian to a member of the Ku Klux Klan.

The spike in hate crimes and rhetoric against Muslims in America during and after President Trump’s election speaks for itself; and now— just days after his inauguration— it continues to escalate.

Mosques and innocent Muslims have been and continue to be attacked for being faithful.

A religious individual is defined as one who shows deep religious feelings or commitment, while a person filled with extreme and tenacious zeal is a fanatic— stepping outside the boundary of any religion he or she claims to follow.

Sheikh Ibrahim Kazerooni of the Islamic Center of America said Islam has rejected any type of extremism.

“If the essence of all religion, according to the deliberation of the Quran, is social justice and love for everyone and compassion, anyone who steps outside the boundary is considered to be an extremist,” he said.

He added that the Quran says faith cannot be imposed and that it commands Muslims to be compassionate and merciful, so anyone who steps outside of this principle is extreme.

“The way you communicate with people should be in the best possible way,” he said. “Even in your conversation, you have to be respectful.”

Dawud Walid, executive director of the Michigan chapter of the Council on American-Islamic Relations (CAIR-MI), agrees.

“People of all religions or creeds have a bell curve,” he said. “Meaning that the masses of the people are in the middle and then there are people who are on the extreme frenzies of both the right and the left. That is not something that is just particular to Islam; there are extremists who are Buddhists, Christians and others.”

He said extremists overlook the understanding of religion.

“The one who is far to the right and extreme in terms of violence is someone who has missed the normative understanding of Islamic theology,” he said. “The Quran is very clear that whoever kills an innocent person, it’s as if they killed all of humankind; and the Quran commands [Muslims] not to kill an innocent soul that God has made sacred.”

“Racial politics and the Islamophobia industry”

Kazerooni said the first thing Muslims need to do collectively is escape the discourse that the “Islamophobia industry” is imposing on them as a way to box them.

“The notion that we should somehow comply with it or use those narratives have to be rejected, first,” he said. “So that we can free ourselves in defining the parameters for the discussion under conversation. Otherwise, we will be bound and boxed into a corner and then we have no other alternative than to discuss this ‘either or.’…This notion of the industry defining ‘Islam’ as evil and ‘Muslim’ as the enemy has to be dealt with not within the parameters they define, but totally free outside.”

He said the idea of dichotomy— making it clear that there are good Muslims and bad ones— is nothing new. He pointed out that in the past, this was applied to people of other races and religion— going back to the Puritan times.

“Nothing has changed,” he said, adding that just as the Puritans did, some Americans today appropriate a number of Biblical narratives to identify somebody as an enemy and somebody else as a friend.

“As the founders of America were White Protestants, Islam has never been seen as truly American or White enough as a religion,” he said. “Therefore, the KKK and radical people in the Christian identity movement are never talked about as being Christian, though they are avowedly Christian in their hatred.”

He said it’s not the case for Islam because it has to do with the race politics that has always defined this country.

Kazerooni said a “colonial mindset” looks at Muslims as the enemy. He said a number of steps are being taken, including conflating 1.5 billion people with individuals who have committed acts of evil.

“We really must step away from what we call parameters or boxes that the outside world define for us and box us into so that we cannot move out,” he emphasized. “It’s either or; either we have to say we are good Muslims or other people are bad Muslims, which is contradictory to the basic tenants of Islam.”

He said the coherent answer to this question is that “faith by itself is neutral.” However, when a person practices it and applies the principles of the faith outside, that shows whether that individual is fulfilling the goals of the faith— regardless of who the person is or the religious affiliation.