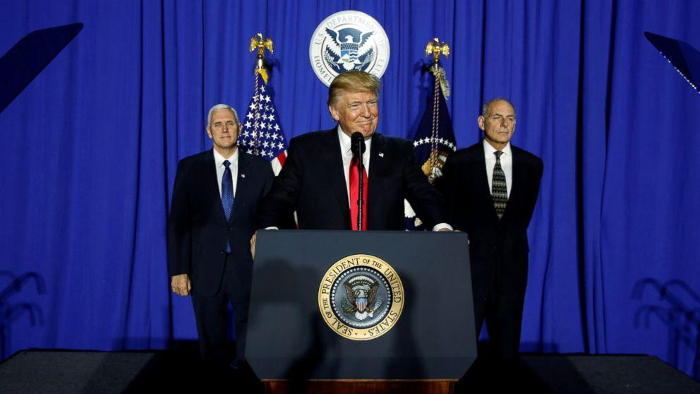 President Trump’s inauguration— connoting hostility, invoking fear and uncompromising in its rhetoric— paled in comparison to President Obama’s in size, strength and substance. Yet, it paved the way for Trump to carry out more austere executive actions in six days than Obama had in passing reasonable and —at times – relatively uncontroversial resolutions in eight years.
Having written his own inaugural address, Trump spoke as if he were still on the campaign trail. To his credit, and to the dismay of many, he is that rare politician who sticks to his promises.
With the executive actions imposed during his first week in the White House, the nation’s 45th president gave the American people a clear indication of his intended actions.
Trump remained unclear on how he planned to execute and fund his controversial proposals. Running on a populist wave that hailed slashing taxes, his ambiguity in ever explaining just how he proposes to pay for the proposed wall on the Mexican border has made it clear that the taxpayer, not Mexico, will bear that financial burden.
Mexico’s president, Enrique Pena Nieto, repulsed by Trump’s insistence on deferring the costs onto Mexico, cancelled his scheduled January 31 trip to Washington D.C.
Even after bullying our neighbor to the south, Trump had the audacity to tweet, “If
Mexico is unwilling to pay for the badly needed wall, then it would be better to cancel the upcoming meeting” on Thursday.
Unfortunately, his ultimatum did not indicate an intention to cancel the construction of the wasteful and ineffective project.
Later in the day, Trump sent the Mexican peso tumbling to a record low when White House spokesman Sean Spicer told reporters the president wanted a 20 percent tax on Mexican imports to pay for construction of the wall. Destabilizing our neighboring countries is not a smart policy; nor will it make Americans any safer, regardless of how tall the walls enveloping us are.
History repeatedly has shown that walls do not work. Separation walls vastly expanded in prevalence since the Berlin Wall fell in 1989. Time and time again, they have been deemed ineffective at enhancing safety and national security.
Trump’s bombastic yet ineffective militarism complements his ongoing attack on the Americans he otherwise has a duty to protect. Within hours of assuming office, he hastened to launch his assault against immigrants, the undocumented, women and the working class.
His first executive order to scrap the Affordable Care Act—without offering an alternative—fell in line with his campaign, which ran on being antithetical to every one of Obama’s achievements.
The real estate mogul also issued a mortgage fee cut reversal, overturning an Obama action issued not long before, expanding younger and working class home buyers’ costs and burdens when it comes to obtaining home loans.
Trump moved in line with his most heavily campaigned-on immigration measures by stating his intention to ban Muslim refugees and immigrants from Sudan, Syria, Libya, Iraq, Iran, Yemen and Somalia.
Even though he has yet to sign this executive order at press time, a question lingers ahead of his clear intention— whether the U.S. bears any responsibility for the suffering inflicted on the populations of the nations on the president’s punishing list.
Successive U.S. administrations are directly or indirectly accomplices in the destruction of those countries, destabilization of their economies and the subsequent displacement of their populations.
This discriminatory and unwelcoming order has drawn fear from immigrants and refugees and is threatening their federal assistance programs as well as their well-being. Trump has also moved to defund sanctuary cities, a totalitarian step in forcing his agenda of austerity onto the public. He also refuses to accept responsibility for expanding the actions preceding American presidents have had in destroying other countries.
He is the first president to openly advocate torture; a step above George W. Bush’s euphemistic framing of the practice under “enhanced interrogation.” In addition to having openly stated that the United States should have taken Iraq’s oil following the 2003 war, it is no surprise that a president who advocates unlawfulness and foreign policy akin to piracy is seeking to withdraw from various international agreements.
Despite what he thinks, Donald Trump is not above the law. Rather, he dangerously and unjustifiably will wreak havoc outside of its parameters.