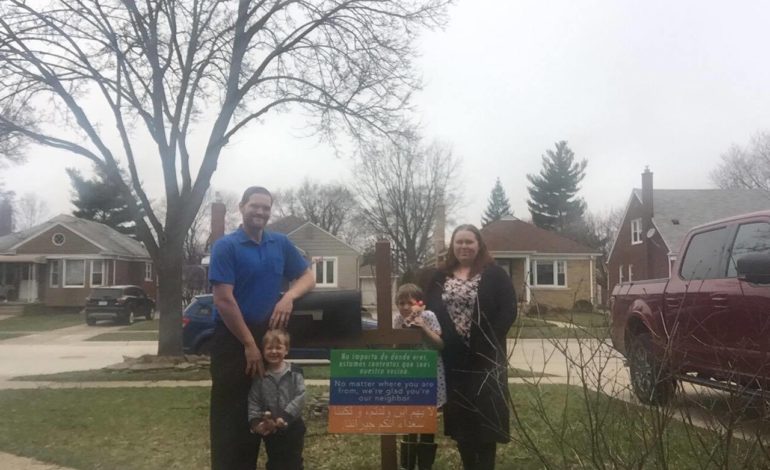 I would invite them to spend the day with me and my family and take a tour of my neighborhood, take a tour of downtown Dearborn, go to East Dearborn, visit a mosque with me. Come meet my neighbors… see that they’re no different… Then you’ll never want to leave.

DEARBORN — At first, local resident Jessica Woolley, 31, wanted to write a letter to her Arab American neighbors to let them know she’s glad they’re here, but a friend showed her a better way.

The work-at-home wife and mother of two told her plan to a nonlocal friend, who said she’s placing a sign on her front lawn to let her own neighbors know they’re welcome. Woolley decided to follow her example and has started her own sign campaign in Dearborn.

Immanuel Mennonite Church in Harrisonburg, Virginia created the sign used by Woolley’s friend. It declares in various languages— including English— that, “No matter where you are from, we’re glad you’re our neighbor.”

The church offers a PDF version that people can print to make a statement in “this time of division” and build welcoming communities, according to its blog, immanuelmennonite.wordpress.com. Woolley decided to print one, but first asked her friends on Facebook if anyone else was interested.

“I posted [the sign] on my Facebook wall and asked if any locals want one of these,” Woolley said. “Because if you get one, it can cost $35 to $40. But if you can get a group, the more you order the less it costs.”

She knew many of her friends would be interested, and by late January she started running a group called “the neighborhood welcome sign orders” on Facebook.

“It just grew from there,” she said. “It exploded. Friends shared it. I was added to some progressive Facebook groups and it was shared there. We’ve got over 500 members in the group now just to order the signs.”

By early February, she and her team distributed the first round of orders. A friend, Aaron Hipple, who attended Dearborn High School with her, helped print the signs.

“I couldn’t have pulled this off alone, so many have volunteered their time and resources to help,” Woolley said, adding that it is one of the many reasons she loves the Dearborn community.

Woolley organizes orders as she gets them. She asks people to join the neighborhood welcome sign orders Facebook group if they’re interested, and wants to make it clear that she does not make any money out of this.

“I ask that people join the group before they order or have somebody do it for them if they’re not on Facebook, only because that’s the easiest way for me to get updates out there,” she said. “I have 10 people who are volunteers at other pickup spots around the metro area. It’s the fastest way for me to connect people who have ordered with their pickup person. I can just update everybody all at once.”

Woolley plans on running an order every couple of weeks.

“I think a lot of people are scared right now, especially in Dearborn,” she said. “People who have lived here or have worked here or have grown up here know what this city is about and how great it is, but there are so many people who don’t know.”

She said she wants people to put a sign on their lawn, so that their neighbors can feel safe and know that they have friends here.

Woolley said she’s lived in Dearborn for about 16 years and would never want to leave.

She said her first experience with diversity was at Dearborn High School.

“It was like the light bulb went off,” she said. “It was a shock, but in a good way. I love the diversity here.”

As for those who are afraid of Arabs and Muslims, Woolley asks them to come and spend the day with herself and her family.

“I would invite them to spend the day with me and my family and take a tour of my neighborhood, take a tour of downtown Dearborn, go to east Dearborn, visit a mosque with me,” she said. “Come meet my neighbors… see that they’re no different… Then you’ll never want to leave.”