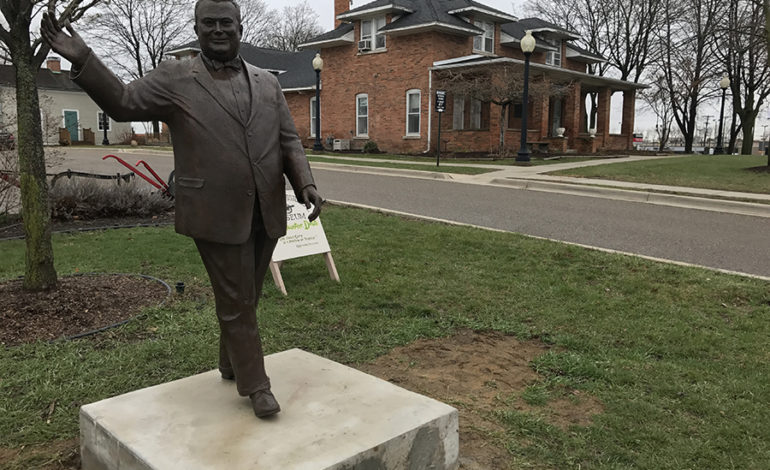 The statue of late Dearborn mayor Orville Hubbard resurfaced in the new location outside of the Dearborn Historical Museum on Friday March 31, 2017, after 17 months in storage. -Photo: Bill McGraw

DEARBORN — The statue of late Dearborn Mayor Orville Hubbard has resurfaced since the controversy that led to its removal from outside the old City Hall building in September 2015.

The statue was originally placed in front of Dearborn City Hall in 1989, but was removed and placed in storage after the building was sold in 2015. It was quietly erected again last week on the Dearborn Historical Museum’s front yard.

Hubbard, mayor from 1942 to 1978, was a vocal proponent of racial segregation.

Residents and civil rights organizations had requested removing the monument, amid national upheaval about racist symbols like the Confederate flag.

Amer Zahr, an Arab American comedian and activist, criticized bringing the statue back and the city spending thousands of tax dollars to refurbish it.

He added that it was not good enough to say Hubbard was a product of his times.

“He did what he did and said what he said during an era of civil rights,” Zahr said. “He was on the wrong side of history then and he is nothing to celebrate now. It’s time to stand up against this slap in the face to Dearborn’s diversity and our Arab-American community in particular.”

Dearborn mayoral candidate Jim Parrelly said in a statement that restoring Hubbard’s statue would “turn back the clock in Dearborn.”

“It seems quite clear to me, from his own words, that Hubbard would despise the Arab/Muslim Americans filling up East Dearborn and the increasingly varied workforce at Ford Motor Company,” Parrelly said. “The diverse populations of Warren Avenue and Ford Road are precisely the people Hubbard would have worked hard to keep the city ‘clean’ of.”

The candidate blasted Mayor O’Reilly for stating that museum is the “appropriate site to acknowledge [Hubbard’s] place in Dearborn’s history.” The state of Orville Hubbard was removed from in front of Dearborn City Hall in September 2015. – Photo: Bill McGraw

The debate over Hubbard’s statue reignited after the Charleston, S.C. church shooting on June, 17 2015. On June, 29, journalist Bill McGraw published an article in Deadline Detroit, suggesting moving the statue to the Historical Museum.

But Jack Tate, the curator of the Dearborn Historical Museum, told The AANews in Nov. 2015 the statue was moved from the former City Hall simply because the building was no longer city property.

The Dearborn municipal government sold City Hall to Artspace and moved to a new administrative center farther west on Michigan Avenue. The historical building is being turned into lofts and studios for artists.

Tate confirmed that the statue would be placed in front of the DHM, facing Brady Street.

“We knew it was going to be moved a year ago,” he said at the time.

David Good, Hubbard’s biographer and a member of the Dearborn Historical Commission, said the mayor’s office recommended the new location for the statue and that the commission approved it unanimously.

He added that there is no place for it inside the museum.

“I think outside the museum is a pretty good spot,” Good said. “I endorse that.”

However, he added that he would have liked the statue to be displayed at the Henry Ford Museum, as a part of the civil rights era exhibit.

Hubbard made anti-Black statements and tried to discourage African Americans from moving to Dearborn.

He openly used the n-word. During the Detroit riots of July 1967, he ordered the police to shoot looters on sight.

He gained national fame for his views and became known as the North’s last segregationist.

“Goddammit, I don’t hate n—-,” Hubbard told the New York Times in 1969. “Christ, I don’t even dislike them. But if Whites don’t want to live with n—–, they sure as hell don’t have to. Dammit, this is a free country. This is America.”

Despite his tainted legacy, Hubbard is credited with improving the quality of life in Dearborn. He commissioned the purchase of Camp Dearborn and bought homes for the city’s senior citizens in Florida.

Mayor Jack O’Reilly declined to comment on the matter.

However, in July 2015, O’Reilly told The AANews the statue was created through private funds raised by residents out of their regard for Hubbard’s impact on the quality of services offered in the city during his career.

When asked at the time whether Hubbard’s statue should be removed, O’Reilly said, “We agree that the statue can become a focal point as people locally— and across the country— rightly take a hard look at race relations in the past. We understand the statue in its current location can be a distraction from the reality of our story as a city today. It certainly doesn’t define us, so we’d much rather put our energy into conversations that reflect the progress we’ve made as a community and as a country.”