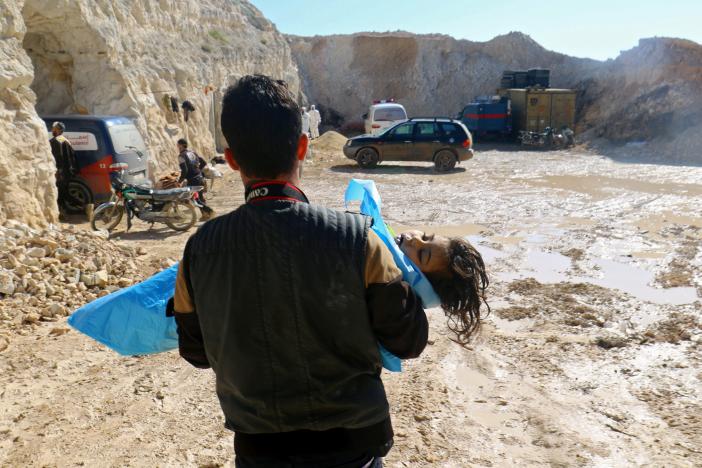 A man carries the body of a dead child, after what rescue workers described as a suspected gas attack in the town of Khan Sheikhoun in rebel-held Idlib, Syria April 4, 2017. REUTERS

BEIRUT, Lebanon – The deadliest chemical weapons attack in years in Syria killed dozens of people in northern Idlib province on Tuesday morning, including children, and sickened scores more, according to medics, rescuers and witnesses in the rebel-held province.

The British-based Syrian Observatory for Human Rights said the attack killed at least 58 people and was believed to have been carried out by Syrian government jets. It caused many people to choke, and some to foam at the mouth.

Observatory Director Rami Abdulrahman told Reuters the assessment that Syrian government warplanes were to blame was based on several factors such as the type of aircraft, including Sukhoi 22 jets, that carried out the raid.

However, the Organization for the Prohibition of Chemical Weapons has also accused ISIS of using banned mustard gas in Iraq and Syria. But the area where the attack on Tuesday took place, the town of Khan Sheikhoun, is not held by ISIS but by other insurgents — al-Qaeda-linked militants and a variety of other rebel groups.

The Organization for the Prohibition of Chemical Weapons, an intergovernmental organization located in the Hague, Netherlands, issued a statement expressing its “serious concerns” about the reports from Idlib and said a fact-finding mission had been launched into the deadly attack.

The attack at Khan Sheikhoun would be the deadliest chemical attack in Syria since sarin gas killed hundreds of civilians in Ghouta near Damascus in August 2013. Western states said the Syrian government was responsible for that attack. Damascus blames rebels.

Damascus and Moscow have officially denied any involvement in the chemical attack.

“We deny completely the use of any chemical or toxic material in Khan Sheikhoun town today and the army has not used nor will use in any place or time neither in past or in future,” the Syrian army command said in a statement.

Russia, which is an ally of the Syrian government, denied conducting any strikes close to the affected town.

The White House minced no words on Tuesday, strongly condemning Syria’s chemical weapons attack against rebel factions in the country while blaming the former administration’s weak Syria policy for opening the door to such attacks.

“Today’s chemical attack in Syria against innocent people, including women and children, is reprehensible,” White House Press Secretary Sean Spicer told reporters. “The United States stands with our allies across the globe to condemn this intolerable act.”

Spicer said the chemical weapons strike, in which at least 58 people had died, including 11 children, was the direct result of “the past administration’s weakness and irresolution” toward the Assad regime.

Tuesday’s chemical weapons attack was the third time forces loyal to Syrian President Bashar al-Assad have allegedly used such weapons since a 2014 pact with Russia to dismantle his chemical stockpiles. All three attacks, including Tuesday’s strike, were focused on the anti-government enclave of Idlib in northern Syria. So far no real evidence have been provided to implicate the Syrian government in such attack.

U.S. Ambassador to the United Nations Nikki Haley said Tuesday that members of the U.N. Security Council would hold a rare open session on Syria’s chemical weapons use at the organization’s headquarters in New York on Wednesday.

The attack in Idlib took place on the day that the European Council was hosting a conference in Brussels on the future of Syria.  EU’s top diplomat, Federica Mogherini, blamed al-Assad for the “awful” attack.

“The government of Bashar al-Assad bears primary responsibility for a suspected chemical attack that killed at least 58 people in a rebel-held town in Syria,” Mogherini said on Tuesday, immediately after the attack has been reported.

“Today, the news is awful,” Mogherini said in an interview with media organizations in Brussels on the side-lines of a EU-U.N. conference that was meant to focus on the post-conflict situation in Syria.

French Foreign Minister Jean-Marc Ayrault called for an emergency meeting of the U.N. Security Council, describing the attack as a “despicable act” and “testimony to the barbarism which the Syrian people have been victims of for many years.”

The U.N. Security Council was expected to meet on Wednesday, April 5 to discuss the deadly attack.

In Damascus, the Syrian government denied that it has used chemical weapons, arguing that insurgents and ISIS fighters use toxins to frame the government or that the attacks are staged.

The Syrian army “categorically denies the use of chemical and poisonous material in Khan Sheikhoun” in Idlib province Tuesday, the General Command said in a statement.

“The Syrian army holds the terrorist groups and those supporting them responsible for the use of chemical and poisonous material and for the careless wasting of innocent civilians’ lives to achieve their despicable goals and agendas,” the statement said.

At a state memorial ceremony for the late Israeli President Chaim Herzog at Mount Herzl in Jerusalem, Israeli Prime Minister Benjamin Netanyahu said he was “shocked and outraged.”

“There’s no, none, no excuse whatsoever for the deliberate attacks on civilians and on children, especially with cruel and outlawed chemical weapons,” he said.