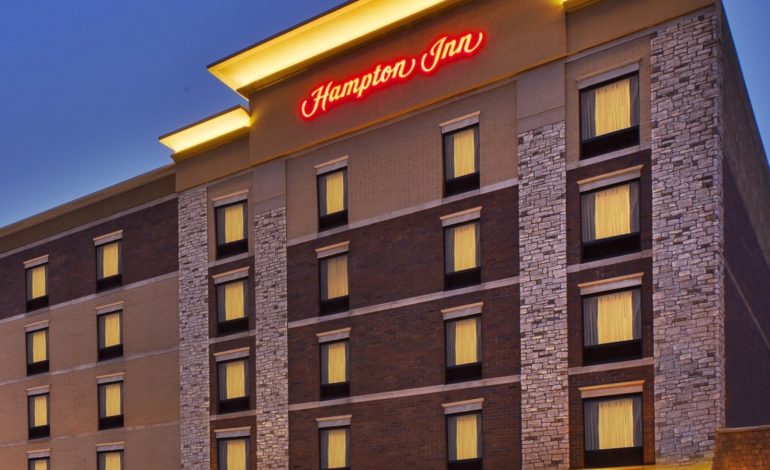 DEARBORN – The opening of a hotel in the heart of downtown Dearborn brings the first stages of promising business developments expected to substantially revitalize the city.

A towering, seemingly new building on Michigan Avenue is among dozens of award-winning Hampton Inn Hotels owned by four Iraqi immigrants – the Bacall brothers. Their hotels are among the top 6 percent worldwide and are the top first, third and fifth in the state.

On Wednesday, March 29, they unveiled a new addition and introduced the first-class standards to Dearborn at their grand opening ceremony at the hotel on 22324 Michigan Avenue.

The hotel owners – Basil, Eddie, Jacob and Mike Bacall – and its manager said the Great Lakes Hospitality Group hopes to fill the gap in accommodating business and leisure guests, evident in the not-so-common amenities like complementary breakfast, cookies in the afternoon, a sizable pool, Wi-Fi and free shuttle service to local companies and shopping areas.

Designed by architect Bill Jarratt, the hotel houses 96 rooms, split between king and queen-size beds, and its lavish contemporary décor and artwork pay tribute to the automotive industry and design.

Basil Bacall, one of the co-owners, told The AANews his group of Hampton Inn Hotels, part of Hilton Hotel family, wants to capitalize on the opportunity and is excited to be part of the revitalization that Ford Motor Company is leading in the area, as it will invest hundreds of millions of dollars in property development and enhancement projects.

“We hope to be at the heart of this new birth of Dearborn,” he said.

Bacall added that a great many visitors from the Middle East have checked in at the hotel, so it helps that at least half of its staff, including General Manger Sam Soubra, are Arab Americans.

“It’s the hard work ethics that always bring them to the top,” Bacall said of the staff.

Speaking to guests, investors, Dearborn City Council members and others, Bacall and Mayor Jack O’Reilly celebrated the project and hard work that made the hotel a success. A testament to the product’s quality is two Bacall-owned hotels ranking in the top sixth percentile of exceptional quality hotels in the world – among more than 2,000 Hampton Inns.

Mayor O’Reilly told The AANews he was skeptical about renovating the building into a hotel in the middle of a busy downtown district when the co-owner first approached the city about the project.

He said the brothers were adamant about wanting to be downtown, and with Ford’s redevelopment announcement, he began to “realize with the things that are already in play, we’re really turning a corner that is going to sustain this area for a long time.”

O’Reilly added that while the economic power will flourish incrementally, it starts with attracting businesses to the area.

But it’s not only downtown Dearborn that will undergo this revitalization.

The mayor said the city, with the help of the Downtown Development Authority, is planning to build corridor development authorities along Dix and Warren Avenues. The DDA’s concept will open access to certain funds and to be a catalyst for new investment, he said.

Where does Mayor O’Reilly sees Dearborn in 10 years?

He said hopes commuters driving from downtown Detroit through Dearborn, will stop there, do business and dine in the city.

“In order to sell the people, you have to get them in front of you,” O’Reilly said.