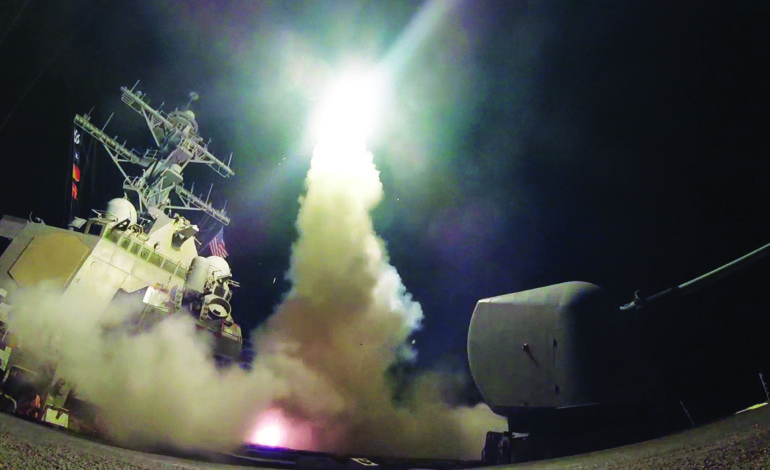 The deadliest chemical weapons attack in years in Syria killed dozens of people in the rebel-held northern Idlib province on Tuesday morning, including children, and sickened scores more, according to medics, rescuers and witnesses in the province.

In a sharp escalation of the U.S. military role in Syria, two warships fired dozens of cruise missiles from the eastern Mediterranean Sea at the airbase controlled by President Bashar al-Assad’s forces in response to the poison gas attack U.S. officials said.

Russian President Vladimir Putin said the strikes broke international law and seriously damaged U.S.-Russia relations, news agencies cited the Kremlin as saying on Friday. But the Kremlin claimed the attack, targeting the Shayrat Air Base in western Syria, was dealt under “far-fetched pretext.”

“Putin views the U.S. strikes on Syria as aggression against a sovereign state in violation of the norms of international law,” Dmitry Peskov, a spokesman for Putin, said in a statement disseminated by Russian state TV early Friday. “Washington’s step will inflict major damage on U.S.-Russia ties.”

“Iran strongly condemns any such unilateral strikes … Such measures will strengthen terrorists in Syria … and will complicate the situation in Syria and the region,” ISNA quoted Bahram Qasemi as saying.

At least six people were killed and seven wounded in the U.S. missile strike on the Syrian regime base in Homs province, according to the province’s governor.

The British-based Syrian Observatory for Human Rights said Tuesday’s chemical weapons attack killed at least 58 people, including 11 children, and was believed to have been carried out by Syrian government jets. It caused many people to choke, and some to foam at the mouth.

Observatory Director Rami Abdulrahman told Reuters the assessment that Syrian government warplanes were to blame was based on several factors such as the type of aircraft, including Sukhoi 22 jets, that carried out the raid.

However, the Organization for the Prohibition of Chemical Weapons has also accused ISIS of using banned mustard gas in Iraq and Syria. But the area where the attack on Tuesday took place, the town of Khan Sheikhoun, is not held by ISIS but by other insurgents — al-Qaeda-linked militants and a variety of other rebel groups.

The Organization for the Prohibition of Chemical Weapons, an intergovernmental organization located in the Hague, Netherlands, issued a statement expressing its “serious concerns” about the reports from Idlib and said a fact-finding mission had been launched into the deadly attack.

The attack at Khan Sheikhoun would be the deadliest chemical attack in Syria since sarin gas killed hundreds of civilians in Ghouta near Damascus in August 2013.

Western states said the Syrian government was responsible for that attack.

Damascus and Moscow have officially denied any involvement in the chemical attack.

“We deny completely the use of any chemical or toxic material in Khan Sheikhoun town today and the army has not used nor will use in any place or time neither in past or in future,” the Syrian army command said in a statement.

Russia, which is an ally of the Syrian government, denied conducting any strikes close to the affected town.

The White House minced no words on Tuesday, strongly condemning Syria’s chemical weapons attack against rebel factions in the country while blaming the former administration’s weak Syria policy for opening the door to such attacks.

“Today’s chemical attack in Syria against innocent people, including women and children, is reprehensible,” White House Press Secretary Sean Spicer told reporters. “The United States stands with our allies across the globe to condemn this intolerable act.”

Spicer said the chemical weapons strike, in which at least 58 people had died was the direct result of “the past administration’s weakness and irresolution” toward the Assad regime.

Tuesday’s chemical weapons attack was the third time forces loyal to Syrian President Assad have allegedly used such weapons since a 2014 pact with Russia to dismantle his chemical stockpiles.

All three attacks, including Tuesday’s strike, were focused on the anti-Assad enclave of Idlib in northern Syria. But, so far, no real evidence has been provided to implicate the Syrian government in such actions.

On Wednesday, Trump said the attack “crosses many, many lines”, alluding to predecessor Barack Obama’s threat to knock down Assad with air strikes if he used such weapons.

“I will tell you, what happened yesterday is unacceptable to me,” Trump told reporters at a news conference with Jordan’s King Abdullah. “And I will tell you, it’s already happened that my attitude toward Syria and Assad has changed very much.”

When asked at an earlier meeting whether he was formulating a new policy on Syria, Trump said, “You’ll see.”

On Wednesday, U.S. Ambassador to the United Nations Nikki Haley held an open Security Council session on the attack in Syria at the organization’s headquarters in New York.

French Foreign Minister Jean-Marc Ayrault had previously called for an emergency meeting of the Security Council, describing the attack as a “despicable act” and “testimony to the barbarism which the Syrian people have been victims of for many years.”

However, during the meeting, the vetoes by China and Russia on Syria hindered instant action concerning the alleged chemical gas attack.

Russian officials said the attack was the work of “terrorists” battling Assad and asserted that the claims of witnesses were undependable and from “discredited” groups.

The attack in Idlib took place on the day the European Council was hosting a conference in Brussels on the future of Syria. EU’s top diplomat, Federica Mogherini, blamed Assad for the “awful” attack.

“The government of Bashar al-Assad bears primary responsibility for a suspected chemical attack that killed at least 58 people in a rebel-held town in Syria,” Mogherini said on Tuesday, immediately after the attack had been reported.

“Today, the news is awful,” Mogherini said in an interview with media organizations in Brussels on the side-lines of an EU-UN conference that was meant to focus on the post-conflict situation in Syria.

In Damascus, the Syrian government denied that it has used chemical weapons, arguing that insurgents and ISIS fighters use toxins to frame the government or that the attacks were staged.

The Syrian army “categorically denies the use of chemical and poisonous material in Khan Sheikhoun” in Idlib province Tuesday, the General Command said in a statement.

“The Syrian army holds the terrorist groups and those supporting them responsible for the use of chemical and poisonous material and for the careless wasting of innocent civilians’ lives to achieve their despicable goals and agendas.”

At a state memorial ceremony for the late Israeli President Chaim Herzog at Mount Herzl in Jerusalem, Israeli Prime Minister Benjamin Netanyahu said he was “shocked and outraged.”

“There’s no, none, no excuse whatsoever for the deliberate attacks on civilians and on children, especially with cruel and outlawed chemical weapons,” he said.

U.S. officials informed Moscow, but did not seek approval U.S. officials said they informed Russian forces ahead of the missile attacks and that there were no strikes on sections of the base where Russians were present.

But they said the administration did not seek Moscow’s approval.

“Years of previous attempts at changing Assad’s behavior have all failed and failed very dramatically,” Trump said from his Florida resort.