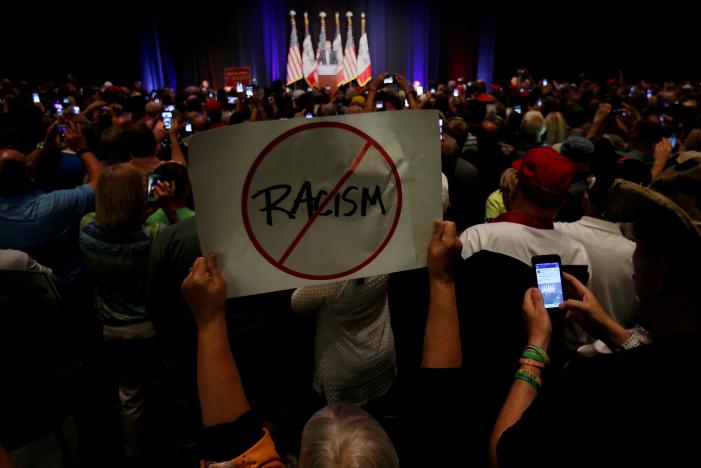 Courtesy of Reuters
WASHINGTON- Tiffany Cartagena said she was eating with her mixed-race girlfriend at a restaurant in Ohio last month when she heard nearby diners remark about the “monkey” at the next table.

Denver resident Gwendolyn Mami, an African-American, was on a January flight when another passenger proclaimed President Donald Trump’s proposed border wall would stem the flow of “those people”, she recalled. Allen Dees, a white Louisiana house painter, said two black men hurled racial slurs at him in March and told him to get out of their neighborhood.

As Trump nears his 100th day in the White House after a campaign punctuated by his inflammatory comments about Muslims and immigrants, a number of Americans say U.S. race relations are deteriorating, according to a new Reuters/Ipsos opinion poll.

The poll, taken from March 28 to April 3, asked more than 2,800 adults to rate the danger of racism and bigotry in America. About 36 percent gave it the worst rating possible, saying they considered racism and bigotry an “imminent threat” to the country. That is up a few points from the 29 percent who answered the same way two years ago. (For a graphic on poll results see tmsnrt.rs/2oQAD54)

The White House did not respond to a request for comment on the poll results.

A majority of the nearly two dozen poll respondents reached by Reuters, including Cartagena, Mami and Dees, said they have recently sensed an unsettling rise in racial hostility – or at least a greater willingness by some Americans to express it.

“I’ve seen a lot of people become more bold with their hatred and discrimination,” said Cartagena, 29, who is white. A truck dispatcher in Youngstown and an unaffiliated voter, she cast a write-in vote for Senator Bernie Sanders for president in November.

Not everyone sees a shift. While about one in four Americans surveyed in the Reuters-Ipsos poll said “people in my community get along worse than before,” a majority said they had not noticed much change.

“People are always squabbling about things. It’s about the same as it was before,” said Miriam Vroman, 84, a retired hospital supply worker in West Valley City, Utah, who voted for Trump.

Democrats surveyed in the poll were more negative about the perceived threat from racism and bigotry than Republicans.

Still, respondents from both major parties appeared to be more concerned about racism than two years ago as racial, ethnic and religious tensions have flared across the country.

A spate of highly publicized police shootings of African Americans has strained community bonds. So have deadly mass killings in Orlando and San Bernardino, California, by assailants inspired at least in part by Islamic extremist groups.

Some Trump critics say he stoked the enmity with his incendiary campaign rhetoric, including vows to ban Muslim visitors and deport millions of undocumented immigrants.