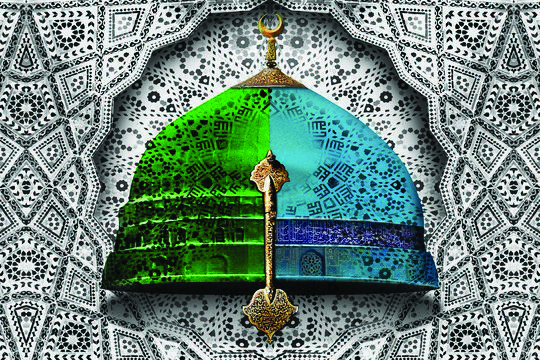 LOS ANGELES — The first solo U.S. show by Saudi Arabian artist Abdulnasser Gharem is currently underway at the Los Angeles County Museum of Art (LACMA) through July 2. The artist, who was also a lieutenant colonel in the Saudi Arabian army, is known for his political and social artwork that interlaces with his Muslim heritage.

The exhibition, Abdulnasser Gharem: Pause, which opened April 16, contains 11 works of sculpture, prints and film, all of which were shaped after the 2001 attacks on the World Trade Center towers in New York. Two of the terrorists responsible were past classmates.

“Some of the works reflect on what’s happening both in Saudi Arabia and in the U.S.,” Gharem told The Art Newspaper. “But I am not picking a side; I’m just trying to be a mirror to my society.”

The display consists of two new works. One is a massive wall-sized “stamp painting” called Camouflage, which Gharem built with thousands of small rubber stamps.

It shows an army tank aimed at the viewer against the background of a colorful Iranian mosque. The painting hints at how theocracies hide their own religious bigotry behind a facade of devoutness.

The second new work is the new dome sculpture Hemisphere. It is half-modeled after the green dome of the Mosque of the Prophet in Medina, and half on a late Islamic warrior’s helmet in an effort to represent peace and war in one piece.

Linda Komaroff, curator of Islamic art at LACMA and the organizer of the show, said that Gharem’s work resonates with the way she constructed the collection of contemporary Middle Eastern art at the encyclopedic museum, where historical Islamic works are also kept.

“What interests me [is] the intersection of past and present,” she said. “The media and platforms for Gharem’s work clearly borrow from the mainstreams of modern art, but the narratives and images are drawn from his everyday world, while many of his motifs—including geometric designs and floral arabesques—belong to the canon of Islamic art.”

Out of all the museums in the U.S., LACMA has the prime collection of contemporary Middle Eastern art. Saudi Arabia is the second-most represented country, after Iran.