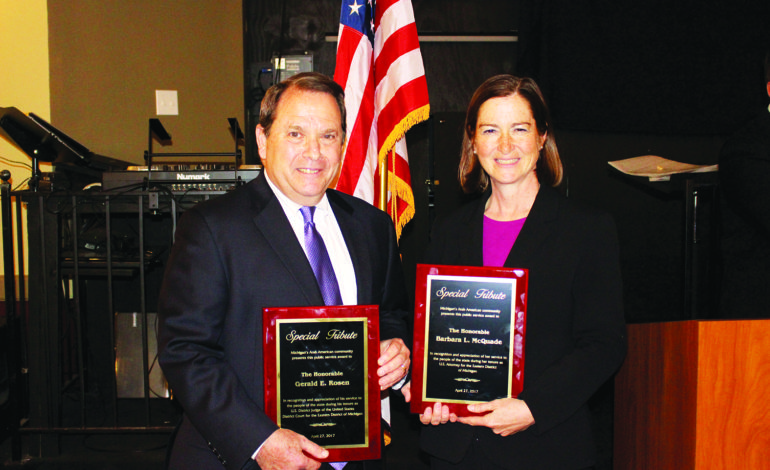 City and federal officials, judges, activists and Arab American businessmen paid tribute to the two honorees, described by the emcee— The AANews Publisher Osama Siblani— as champions of Arab American civil rights in the court amid a contentious political climate after the presidential election.

“In the past years, McQuade was no stranger to our community, attending meetings and working closely with the community after September 11,” he said.

Siblani applauded her professional ethics and her commitment to the laws as “greater than the federal position she held.”

At the start of her tenure, McQuade appointed Arab American lawyer Abed Hammoud as an Assistant U.S. attorney in the district, making him the first Arab and Muslim to serve in the position, according to Siblani. She then appointed two Muslim Arab Americans this year before leaving her office.

Through McQuade’s office, the Department of Justice’s civil rights division reached a settlement agreement in August 2014 with the Crestwood School District to improve English Language Learner (ELL) education, and ensure that individuals who complain about discrimination do not face unlawful retaliation.

McQuade also played a crucial role in protecting the Constitutional rights of Arabs and Muslims in Michigan, enabling them to build mosques in Pittsfield Township and Sterling Heights. The construction of both mosques was fiercely opposed by the both towns’ city councils and some residents.

“Although some decisions we vehemently disagree with, she carried her duty with honor and an open door,” Siblani said.

David Gelios, special agent in charge of the FBI’s Detroit Division, said when he first took on the position, McQuade had the greatest impact in enabling him to understand the local Arab and Muslim communities.

“I had the privilege of working with her and we were partners on many issues,” he said. “And I say with confidence that she was a great example for her employees, as well as for the country.”

Referring to Rosen, Gelios said it is unusual for judges and federal agents to forge relationships, but he eventually became friends with Rosen and twice visited “the great cook and storyteller” at his house.

The greatest tribute to McQuade and Rosen was their commitment to applying the law regardless of political affiliation or personal bias, he added.

Chaldean businessman Jacob Bacall praised McQuade and Rosen for their efforts to stand up for those whose rights are violated.

Daniel Lemisch, acting U.S. Attorney for the Eastern District of Michigan, said McQuade was among the most prominent federal prosecutors in the county, and one who spent a career building bridges with minority communities.

“It is because of her that the Muslims of Sterling Heights and Pittsfield can practice their religion freely,” he said.

Lemisch added that McQuade’s support not only extended to Muslim communities, but also to others, including the Latino and Asians communities.”

At the podium, McQuade thanked the participants of the farewell dinner, and said the Arab American community is the dearest to her heart.

“When I was a child, my dream was to become either a baseball player or the president,” she said. “I learned that America was created for equal opportunities and for social justice, so I learned to fight for those values early on.”

She pointed to her past defense of the community, like when the Rev. Terry Jones visited Dearborn, and the harassment by some extremist religious groups during the Arab American festival in Dearborn.

“The people I have gotten to know in this community are patriotic, doctors, engineers and lawyers,” McQuade said. “I will go to university and in my heart a lot of wonderful memories of this community.”

McQuade will be teaching at the University of Michigan Law School.

In his speech, Judge Rosen described the Arab American community as his second home.

“When I travel, I speak about [Arab Americans’] vital role in the city’s prosperity and development,” he said.