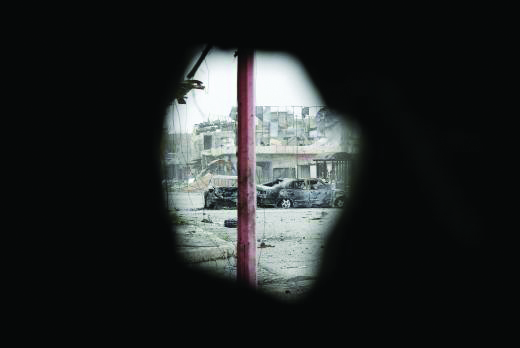 CAIRO — After an American airstrike killed more than 100 Iraqi civilians in a house in the western part of Mosul in March, U.S. officials suggested ISIS was to blame for the horrific toll, saying militants may have crammed the building with people, booby-trapped it with explosives, then lured in an airstrike by firing from the roof.

None of that happened, survivors and witnesses told The Associated Press, recounting the deadliest single incident in the months-long battle for the Iraqi city.

“Armed men in the house I was in? Never,” said Ali Zanoun, one of only two people in the building to survive the March 17 strike. He spent five days buried under the rubble of the building, drinking from a bottle of nose drops, with the bodies of more than 20 members of his family in the wreckage around him.

Instead, Zanoun and others interviewed by the AP described a horrifying battlefield where airstrikes and artillery pounded neighborhoods of western Mosul relentlessly trying to root out IS militants, leveling hundreds of buildings, many with civilians inside, despite the constant flight of surveillance drones overhead.

Displaced families scurried from house to house, most driven out of their homes by ISIS militants, who herded residents at gunpoint out of neighborhoods about to fall to Iraqi forces and pushed them into ISIS-held areas.

The AP spoke to seven witnesses, including neighbors and people who had been in the house, all of whom said no one was forced into the building, where dozens had taken refuge, thinking it would be safe amid the fighting raging around them. It was not on a main road and it was only two stories tall, making it unlikely IS militants would use it as a sniper’s position that might be targeted by an airstrike.

And, they said, the militants did not rig the building with explosives.

More than 1,590 residential buildings have been destroyed in western Mosul, based on analysis of satellite imagery and information from local researchers, the U.N. said last week.

Airstrikes killed 1,254 people in western Mosul in March and April alone, according to Iraq Body Count, an independent group documenting casualties in the war, cross-checking media reports with information from hospitals, officials and other sources.

In comparison, an estimated 1,600 civilians were killed or wounded from all causes during the 100-day campaign to recapture Mosul’s less densely populated eastern half, which ended in mid-January.

Official figures from the Pentagon, which is slower in confirming deaths, are far lower: it said over the weekend that it has confirmed coalition airstrikes killed at least 352 civilians in Iraq and Syria combined since the campaign against IS started in 2014.