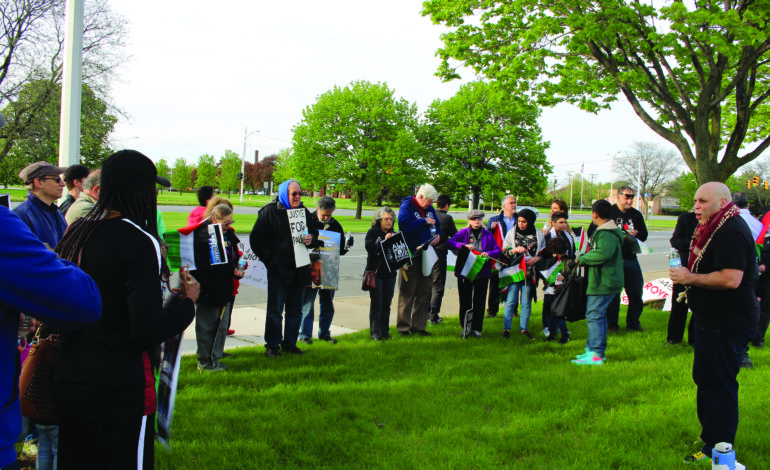 People all over the world showed their solidarity by organizing demonstrations and vigils. Some have participated in the “#SaltWaterChallenge”, in which they share videos of themselves drinking salted water— the sustenance on which the prisoners are surviving.

Locally, a small, diverse crowd of men, women and children gathered outside Henry Ford Centennial Library on May 3 at 6 p.m. to demonstrate solidarity with those on the hunger strike. They peacefully carried banners and Palestinian flags as passing cars honked in support.

Local activist Amer Zahr organized the vigil and reached out to American Muslims for Palestine and Jewish Voice for Peace-Detroit to spread the word.

He said the vigil also aims to raise awareness about the illegal and inhumane conditions that Israel enforces on the prisoners.

On April 16, Barghouti, who is serving a sentence at Hadarim Prison, announced the strike through an opinion piece for the New York Times, demanding an end to Israel’s merciless system of oppression and abuse.

“Decades of experience have proved that Israel’s inhumane system of colonial and military occupation aims to break the spirit of prisoners and the nation to which they belong, by inflicting suffering on their bodies, separating them from their families and communities, using humiliating measures to compel subjugation,” he wrote.

Barghouti said Israel has violated international law in various ways for 70 years and has still been exempt for its actions. He wrote that this protest pilots the Palestinians’ struggle for Freedom and Dignity— the name the prisoners chose for the strike— on their “walk to freedom.”

Barbara Harvey, the head of Detroit’s Jewish Voice for Peace, discussed the three main demands: An end to administrative detention, an end to solitary confinement and the right to family visits.

She said administrative detention is the method by which Palestinians, including hundreds of children, have been imprisoned for throwing stones. She added that solitary incarceration is also imposed on children.

Harvey said family visitations are hypothetically allowed, but all the prisons except one are in Israeli occupied territories.

“And, most of the people living in the West Bank cannot get into Israel,” she said. “They are not allowed to travel to Israel. A special permit is theoretically available to someone who has family in prison, but it’s really hard to get one of those special permits.”

A few in attendance also shared their thoughts and experiences with The AANews.

“It just changed my point of view,” she said. “The two insights I came away with on my first trip was the restraint of the Palestinian area, when you see the oppression under which they’re living, and the distorted picture we get of the situation in this country.”

She said she wants Palestinians to know they’re not forgotten and that there are many Americans who are starting to recognize the truth.

A 13-year-old Palestinian American boy named Mohamad wore a Palestinian keffiyeh— a symbol of nationalism— around his neck. He said he came with his mother and 7-year-old brother because he wants to free the people in Palestine.

A Palestinian American father and his two sons also came to show their solidarity.

Muhammad Odeh said he saw the suffering first-hand, as at least 20 percent of the residents in his village were imprisoned.

Odeh said he wants his boys to learn the importance of activism from this stand, so they can eventually become activists for the Palestinian cause themselves when they grow older.

At the end of the vigil, Zahr asked those in attendance to drink water in solidarity with the prisoners.

“Palestine is always in our thoughts,” he said. “We never forget. Whether we’re doing activism on the streets or on social media, it’s always in our hearts; and that’s a failure for Israel, because after 70 years, we are still talking about Palestine.”