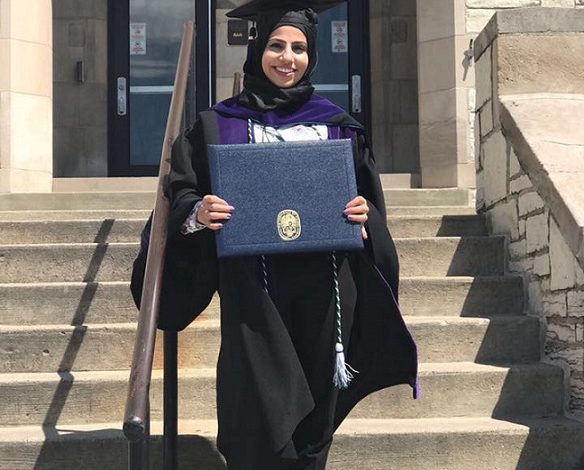 Maysaa Ouza graduating from the University of Toledo Law School

A judge advocate practices law in the Air Force differently than in the private sector. Ouza will be able to travel, live and work in diverse sites all over the world, while providing legal services to the U.S. Air Force and defending the legal rights of U.S. airmen.

Despite misconceptions, Ouza said her hijab wouldn’t limit her and is actually one of the reasons she applied.

“The Air Force is all about leading a life of structure and immense discipline and, quite frankly, so is the hijab,” she said. “My hijab is an asset to the Air Force, not a liability.”

Growing up, she had found interest in serving the public, especially her community and country, and so her father and brothers encouraged her to join the Air Force. Ouza said her mother and sister also always assured her that nothing restrained her from reaching her dreams, and that’s what pushed her towards that goal.

“My mother [said] I could become anything I want to be, and only the sky is the limit,” she said. “She was right, and because of her words of admiration, I applied for a job that a Muslim hijabi has never applied for before.”

Ouza said learning about her parents’ immigration from Lebanon in an effort to live the “American Dream” and grant their children a better life opened her eyes to the “nation’s enduring principles of life, liberty and the pursuit of happiness.”

She realized that these values opened a door of opportunities and privileges for her parents that would not have been open to them anywhere else, so she wants to give back.

“Serving the country that has given me so much is a show of gratitude and appreciation for all that it has given [us],” she said. “Our rights as U.S. citizens were hard-earned and protected through the sacrifice of thousands of honorable men and women. Serving our country by being a [judge advocate for the Air Force] would allow me to help secure those rights for future generations.”

She even studied abroad at England’s prestigious Oxford University in her second year.

Ouza also discussed the JAG application process, which she said is competitive, challenging and highly selective, with The AANews. She said the Air Force evaluates candidates based on their academic performance, extracurricular activities and community service.

She’s also been a criminal and constitutional instructor for high school students at the Law and Leadership Institute.

In addition, she interned at the Wayne County Prosecutor’s Office for eight months, working under Assistant Prosecuting Attorney Fadwa Hammoud.

“Fadwa pushed me to do things that I never believed I could do, such as speaking on the record, drafting motions, and preparing for trial,” Ouza said. “Because of her confidence in me, I welcomed and overcame any challenges that came my way…She set the bar high for leadership and I strive to live by her example.”

Hammoud said Ouza excelled during her internship and left a lasting impression on everyone she worked with, especially the victims she represented.

“She possesses the discipline, passion, and work ethic to serve our country,” she said, adding that it’s no surprise that she’s making history as the first Muslim hijabi to serve as judge advocate in the Air Force.

Ouza said she specifically applied to the Air Force because it allows her to focus on serving her country through the law.

“After all, three years of law school and thousands of hours of studying prepared me to practice law,” she said. “And hence, I want to serve my country in that capacity to the best of my ability.”

Before becoming a judge advocate, Ouza said the Air Force first teaches her how to become an officer. That takes place during Commissioned Officer Training, a program that runs for approximately five weeks, at Maxwell Air Force Base in Montgomery, Alabama.

“It is a rigorous program designed to challenge you both mentally and physically, developing you into an officer and a leader,” she said, adding that it involves lots of physical conditioning, like running, push-ups, sit-ups, etc…, as well as classroom studies and training on Air Force duties.

Ouza said physical fitness must be maintained and that “it is not a chore”, but “a way of life.”

She will be given time during her day to work out at the Air Force’s fitness facilities. She plans on eating better and hiring a personal trainer to maintain her physical fitness.

As for facing possible discrimination in the workforce, Ouza said that being afraid to face adversities like that won’t allow us to progress or break barriers, but will only let hate win.

Ouza views her Arab American identity and bilingual ability as positives that allow her to bring forth a new perspective to the Air Force that aids in building more bridges and stronger ties with her community as well as associates abroad.

She also said she hopes her story inspires Arab Americans and Muslim women who look like her to apply for jobs like this, because many fear rejection.

“I want to break those barriers,” she said. “I want to have a big influence not only in my community, but also nationally. I want to set a good example for minorities, especially Muslim women. I want them to serve their nation and stand side by side with the honorable men and women in uniform who sacrifice so much for our safety and our future.”