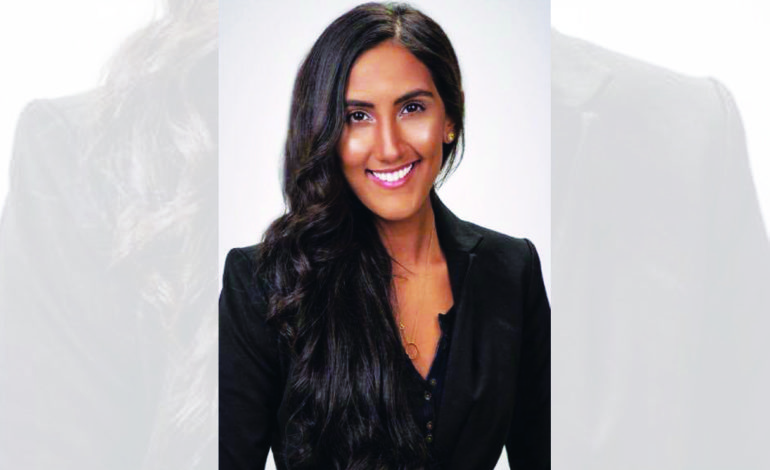 DETROIT — On May 10, Detroit native Rawan Latif, 24, became a captain in the United States Air Force. That is only one of many ways in which Latif has served both her local community and the United States at large.

Latif, who is stationed at Eglin Air Force Base in Florida, comes from a family involved in service, with an uncle who was a chief warrant officer in the Marine Corps for 30 years and a cousin in the Air Force. She had considered joining the Army at a younger age, particularly during her years at Fordson High School.

“Early in high school, I had thought about joining the military, perhaps going to West Point,” she said, “But I began working on my associate’s degree sophomore year of high school and decided to pursue a doctorate in pharmacy. I graduated a year early and had finished most of my prerequisites for pharmacy school, so I continued on that path after I graduated.”

Latif received her associate’s degree from Ferris State University and is currently working as a part-time pharmacist at Walgreens.

During her undergraduate studies at Wayne State University, Latif grew more interested in legislation. She considered the possibility of going to law school after pharmacy school. During her first year as an undergrad, she interned for Sen. Debbie Stabenow (D- Mich.) and decided to forego law school and jump right into politics.

During her work with Senator Stabenow, Latif assisted her legislative aide and correspondent with regard to the senator’s healthcare portfolio. Latif also worked as an intern on U.S. Rep. Brenda Lawrence’s (D-Southfield) campaign to replace Gary Peters when he ran for senate.

In the fall of 2015, she announced her candidacy for Democratic state representative in District 9, which represents portions of Detroit and a small area in Dearborn. However, she subsequently withdrew from the race not long afterward.

“After realizing I don’t wholly agree with the party politics of Detroit and extreme left leaning Democrats, I chose to withdraw because I felt that I would be doing my constituents a disservice by campaigning on platforms they supported and I didn’t.”

Latif became so interested in politics due to her upbringing. She was born and raised in Detroit by a single mother. She went through the Detroit Public Schools System and as such was able to experience the benefits of state and federal programs. Because the high school in her neighborhood was unsafe, Latif went to Fordson High School in Dearborn, using someone else’s address to attend. She took advantage of any opportunity given to her, particularly as she did not come from a privileged family. She knows what it’s like, as she said, “to have a mother who works nonstop but sometimes can’t make ends meet.” She was able to discontinue that cycle of poverty.

Towards the ending of her campaign for state representative, Latif came to realize that she could better serve her community and country in a different way. It was then that she met with a recruiter.

“I began building a packet to go before a board to be selected as a commissioned officer,” she said. “In October [2016], I found out that I was selected and began the process to be commissioned.”

Latif said that being an Arab American, “has influenced my views in that I’m not sheltered or [have] tunnel vision. I’d like to believe I’m quite objective, or at least definitely make a concerted effort to be so.”

Latif comes from a diverse, interracial and multi-religious family. She herself is half Lebanese on her mother’s side, a quarter Pakistani and a quarter Indian. Her family also consists of Shi’a and Sunni Muslims, Orthodox and non denominational Christians, agnostics and atheists. She was not surrounded by Arab culture much until she attended Fordson High School.

“Having Middle Eastern friends, spending time with their families, being a part of their lives for the past 10 years allowed me to see a different side than what is often portrayed,” she said. “I think people often forget how culturally diverse the Middle East is, and each country, and even within each country, there aren’t any homogenous cultural practices.”

Latif has been engaged in service of different kinds, specifically in government and recently military involvement, throughout most of her adult life. She is a Detroit native who still holds ties to her roots. And becoming a captain in the U.S. Air Force is one more way in which she will be able to further the service aspect of her life.