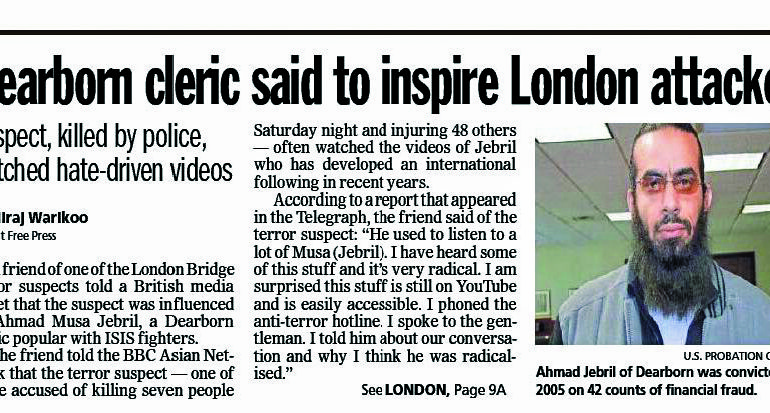 Local and national articles are alarming readers with tales of an insidious “Dearborn cleric” who is apparently “popular” and “inspirational” to ISIS members.

The headlines, however, have it all wrong.

He is neither a cleric nor has he ever really been visible in Dearborn. Furthermore, his obscurity can hardly award him with any level of “popularity”, even from the low trenches of ISIS thugs.

The truth is that Dearborn residents, whose historic community became unfortunately connected with Jibril’s antics within the last week, have no idea who he is. Before headlines announced that one of the June 3 London Bridge attackers was “inspired” by viewing Jibril’s videos, the vast majority of Dearborn residents were just as unfamiliar with him as most of their fellow Americans.

In Dearborn, we are secure in the full understanding that he is not one of our own. In fact, Ahmad Jibril, spewing bombastic anti-Christian, anti-Jewish and anti-Shi’a rhetoric, could not be more out of place in a community where the overwhelming majority would be deemed by him as “heretics.”

If bizarre YouTube personas are a staple of our age, then Jibril is taking full advantage of it. But he is not fooling the community unfortunately connected with his antics. If he does retain a following, albeit a digital one, by a couple hundred of ISIS members, then it is a testament to the reverence for misinformation and misguided spectacle brashly displayed by both parties.

His only claim to fame is a personal YouTube channel and a blog that has been inactive for more than a year and a half, both run out of his basement and his imagination. In a time when innocent taxpayers spend time in ICE detention facilities and the FBI freely raids homes with no rhyme and delayed reason, Ahmad Jibril received no FBI visits for his extremism, even given his sensationalized reputation of inspiring members of today’s worst terror organization to go fight in Syria.

His seven-year stint in jail, which ended in 2012, was not for inspiring terror or spreading sectarian extremism. Despite how high-profile the media makes him out to be, his jail time was spent for his and his father’s 42 counts of fraud, tax evasion and money laundering.

Make no mistake. Ahmad Jibril is not simply a far-right religious cleric. He is a con man and a scammer, who underwent a conversion in prison from a scammer with money to a scammer committing rhetorical fraud. γ