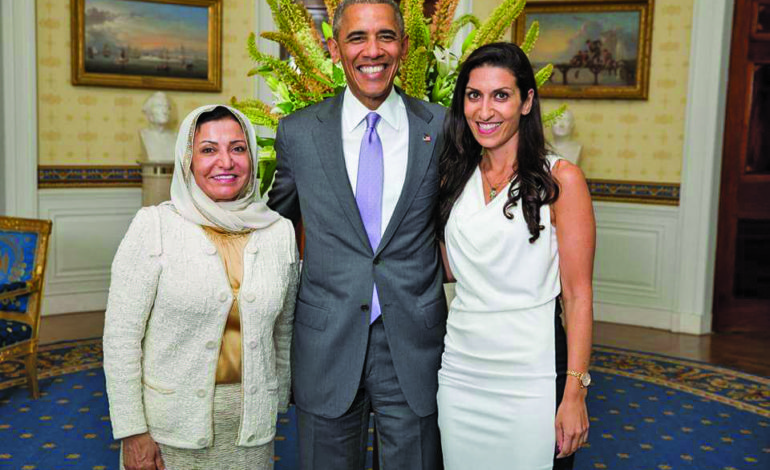 Fayrouz Saad stands on President Obama's left. Saad accepted an appointment by Obama in the Department for Homeland Security in 2009. Photo provided by Fayrouz Saad for Congress

NORTHVILLE— Born and raised in Dearborn, Michigan, Northville resident Fayrouz Saad is the product of hard working parents who immigrated from Lebanon more than 40 years ago.

“It really starts with my parents,” Saad said. “Moving to Michigan for the American Dream. They started a small business in Detroit’s Eastern Market. A very typical story. And I learned a lot from what they were able to accomplish. Really saw how hard work can make a difference for families.” On Thursday, Saad, the director of Detroit’s Office of Immigrant Affairs, announced that she is running for Congress in Michigan’s 11th Congressional District in 2018. Saad said she feels that the American Dream her parents had access to is at stake; she wants to ensure that citizens have a way to thrive and not solely get by.

Saad, 34, earned undergraduate degrees in political science and psychology from the University of Michigan in 2004 and a master’s degree in public administration from Harvard University’s John F. Kennedy School of Government in 2015.

“After college, I started off as part of the Kerry presidential campaign,” Saad said. “And that was a really great experience because I got to understand the district better.”

Saad’s work as a field organizer in the 11th District for Democrat John Kerry’s 2004 campaign for president gave her an initial taste for public service; she went on to work for the late Democratic State Rep. Gino Polidori in 2005. He passed away in 2014.

“One of the most genuine elected officials,” Saad said. “He [Polidori] understood the district really well. I worked for him for almost three years. He always told us, ‘You gotta make sure you’re doing the right thing.'”

Polidori inspired Saad through his anticipatory approach of seeking out his constituents and their opinions by personally knocking on doors and being present at area meetings anytime new legislation was presented. She said she will follow Polidori’s example by being present and accessible to her constituents by pursuing them in a multitude of ways.

Incumbent Republican 11th District Rep. Dave Trott was absent from a town hall in February. Angry constituents brought a live chicken to sit in his place to exemplify their feelings on how difficult it had been to reach him on issues important to them.

I’m ready to fight for the rights of the disenfranchised, for the immigrant, whoever they might be.

“People are unhappy with Trott,” Saad said. “He’s not on their phones, not at their doors. The most important thing is the relationship with the people that they [the Congressperson] serves.”

“People are really upset right now,” she said. “They want change in leadership. They want someone who will go to Washington.”

Saad added that she feels strongly about the fight to protect and expand Medicaid by ensuring Americans have reliable healthcare and that citizens shouldn’t be worried they might be among the millions left without care.

She has watched the change in the nation since President Trump’s administration took office and she has deeply felt how his immigration ban has affected many people.

“I believe we need immigration reform,” Saad said. “I believe that part of that should be a pathway to citizenship. The way to do it is not the way the Trump administration is doing it. Its not by leaving people guessing what is going to happen next. Not by living in fear or tearing families apart; we aren’t going to play into a narrative that divides.”

In 2009, Saad accepted an appointment by President Obama to the Department of Homeland Security’s Office of Intergovernmental Affairs. There, she worked on relationships with the immigrant population and the government by being a liaison between them and elected officials; she also worked on issues regarding cybersecurity, national security and law enforcement.

“It was a great experience,” she said. “I had spent my entire career in Michigan. It allowed me the opportunity to understand how federal government works on the inside.

Saad’s most recent work in public service began in 2015 when Detroit Mayor Mike Duggan appointed her as the city’s first director of immigrant affairs. She recently ended her appointment to prepare for her run for congress.

“We worked to integrate immigrant communities,” she said. “I worked on specific economic programs that help immigrants open up businesses. We helped show them how to own their own homes.”

Saad added that her department conducted efforts to ensure that Michigan’s economy will continue to progress.

As a product of the state’s public school system, Saad said she believes that access to education is important for keeping up with any technological changes in the workforce. She said she wants families to be able to have access to education that will prepare them for the continuous adjustments in the work force. One reason Saad and her husband live in Northville is so they can support the local schools.

“We need good elected officials in place,” Saad said. “My favorite part of any job is connecting and engaging with the people.”

Saad said she wants to quell fears and build up the people through engagement and action; she is ready to fight for the people.

The work she has done at the federal and state levels are part of what she believes make her a strong candidate. She said she wants to be where the rubber hits the road.

“What’s the impact?” Saad said. “I want an understanding from all those perspectives. My desire and love of working with the people is certainly one of them [strengths], but also my diverse life experiences; being the daughter of immigrants; having grown up Arab American and realizing the challenges different communities face on the ground level and on a day to day level as well.”

As a young politician, Saad’s verve is backed by years of public service since she finished college.

“My entire career has pointed to that I’m willing and ready,” she said. “To fight for the rights of the disenfranchised, for the immigrant, whoever they might be. That is why I want to make sure all Americans can have that.”

When Saad isn’t working, she runs. In the past, she has run in marathons, but hasn’t had time to run a full marathon in recent years. However, she still commits to running half marathons. For now, she is focused on making sure the citizens of the 11th District are heard.

“I’m doing this because I care about Michigan families,” she said. “Going back to what I’ve learned from my family and parents: Being able to achieve the American Dream. It should not be lost. It is what makes this country absolutely great.”