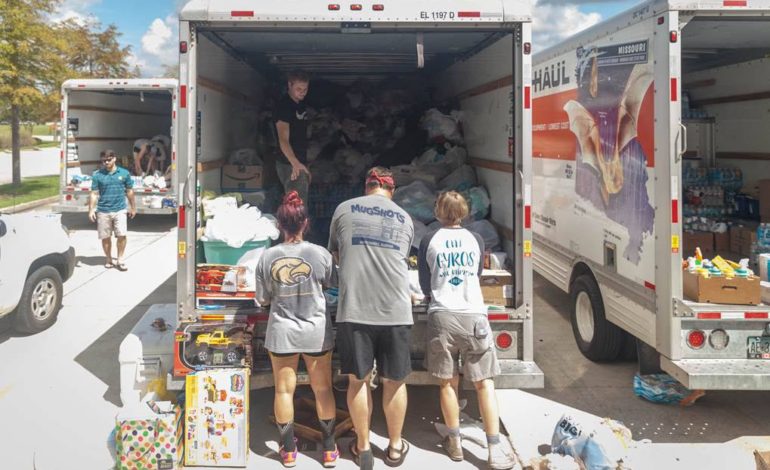 HOUSTON, DEARBORN — Striding strenuously down a freeway, mostly mothers and their children were knee deep in water, making the journey away from their drowned homes.

They carried on their shoulders only what they could save. The water rose so fast that few families in Southeast Texas were left unthreatened by Hurricane Harvey’s catastrophic force.

The category four storm left at least 40 dead and millions with- out homes. Damage costs are expected to reach $75 billion, according to a research firm.

White, Brown, Black, wealthy and poor of Houston– all whose houses are too severely flooded to be livable – became refugees, lugging bags of their most precious belongings like an exiled Syrian mother abandoning her rubble-turned home.

In the midst of desolation, who you are and who comes to your rescue does not matter. Instead, the sense of fellowship and solidarity that has transpired in Texas has been remarkably inspiring for volunteers like Bilal Rana and his team of more than 100 Muslim youths aiding victims of the storm.

They are part of the 5,000-strong Ahmadiyya Muslim Community’s youth association, working with its charity and disaster relief program, Humanity First, to provide anyone in need with food, water, clothing and other supplies.

The charity has worked in more than 40 countries for the last 25 years. Many of those they help end up “in tears,” Rana told The AANews over the phone, as the stricken find hope in unexpected places.

Texas Muslims in the trenches 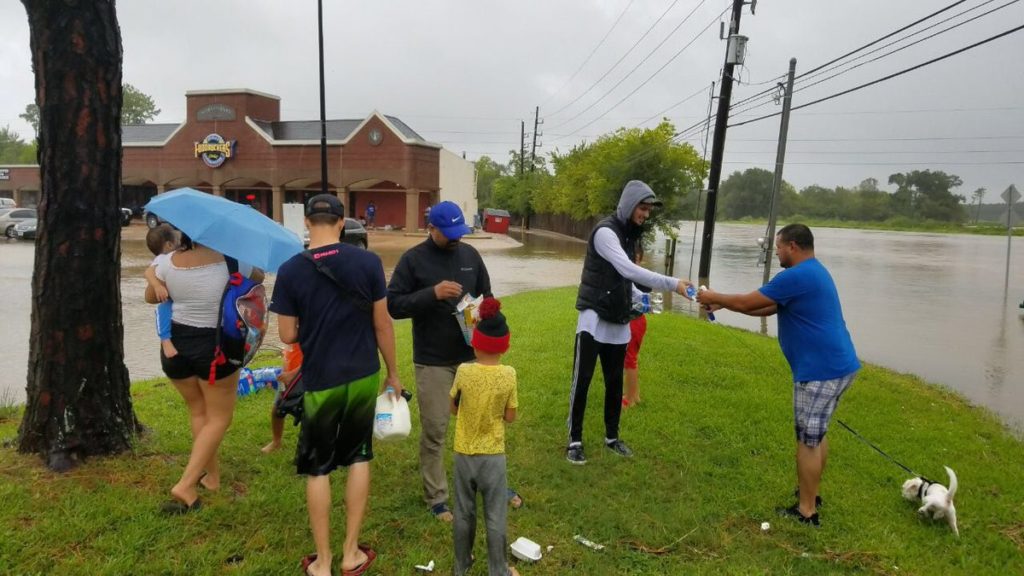 Along with countless good Samaritans and houses of worship, Muslims and Arab Americans across Texas and the country have been on the forefront of disaster relief.

It has been an exhausting week, especially as they mobilized as early as two days after the storm first hit. More than 700 of the Ahmadiyya Muslim Community’s local members have been affected by the storm, Rana said.

By car or by boat, the young Muslims volunteers are combing neighborhoods to hand out supplies, helping lift heavy furniture and ripping up carpet, Rana said. But the thankful look on people’s faces are energizing enough to keep them going.

“The whole city was under water, everyone was affected and houses were just a mess,” he said. “But our story of the week wasn’t the hurricane; it was the lives we touched.”

It was also a natural opportunity for them to show who their Muslim neighbors really are, Rana said. He added that their efforts have not gone unnoticed, as many who honk just to show their appreciation demonstrate that Muslims can embody the epitome of patriotism. The “spirit of family among the chaos” has also warded off looting.

Instead of celebrating Eid al-Adha this weekend with a planned festival at their center, Rana said the youth association members will instead remain volunteering in the trenches. They also expect to fly in hundreds more from other states as the water begins to recede. 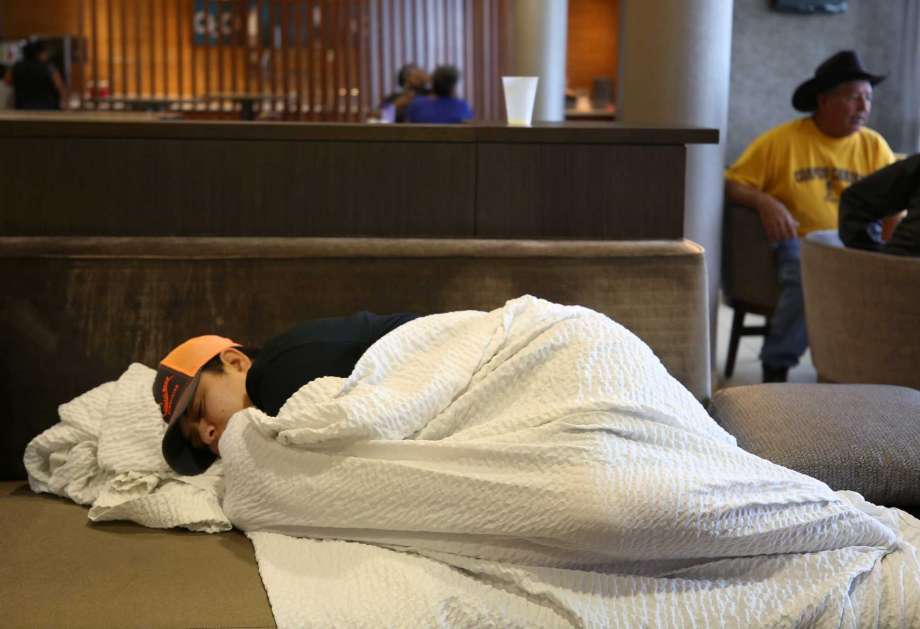 A victim of Hurricane Harvey sleeping in a Houston mosque

At least five mosques affiliated with the Islamic Society of Greater Houston are currently serving as 24-hour shelters. One of those mosques is the Brand Lane Islamic Center in the suburb of Stafford, which is currently offering refuge to stranded community members.

The center sits on 10 acres, less than six miles from the nearest floodwaters, and includes a mosque and a school.

The Islamic Society is also teaming up with Baitulmaal, a Texas nonprofit focused on disaster and poverty relief, to provide evacuees with food, water and hygiene products.

Imam Sheikh Sayed, director of the mosque, told The AANews that when the storm hit, the mosque opened its doors in Stafford as a supply distribution center.

When six people without shelter showed up, the Brand Lane Islamic Center offered them a place to stay. Now, more than 100 children, parents and grandparents from the community are housed at the mosque, each family taking up one classroom.

“We have a doctor, an engineer and a professor,” Sayed said. “They come from well-to-do families that live in large homes. Now, they’re staying in 100-square-foot rooms.”

Some of them are starting to check on their homes, but the imam said he’s afraid most of them will turn right back to the mosque.

Despite the families’ setback, Sayed said it’s humbling to see them remain in “good spirits.”

That’s because even though homes and belongings are destroyed, aid is abundant, Housna Kazrie, a young Houston resident staying at the Brand Lane Islamic Center, told The AANews.

She said they are “doing great” as they continue to receive all the resources they need, and that the center is kept clean. Most of those at the center came with their entire families, each with a small bag carrying one or two shirts, pants, pajamas, maybe a tablet and their most expensive belongings.

“We’re family at this point,” Kazrie said. “We’re enjoying it here and we’re able to be comfortable with everybody around us. They’re all people we know, so I feel safe and can leave stuff in my room.”

She said the mosque is still there with open hands for anybody to pick up supplies, and she has been steadily inviting her non-Muslim friends to stay there, as its large capacity can shelter at least 100 more.

“It’s hard to be away and know you might lose everything you have,” Kazrie said. “But there’s no other option. We just need to help each other out. It doesn’t even matter at this point. During this hard time, the community came together.”

Among the civilians volunteering their times and risking their lives to help storm victims, law enforcement personnel can be spotted at every corner.

On Tuesday, Houston Police confirmed the death of 60-year-old Sgt. Steve Perez. The 34-year department veteran was caught in floodwaters while driving under an overpass.

As Hurricane Harvey was brewing, a Lebanese restaurant remained open to offer all police officers and firefighters a resting place and free meals.

More than 1,000 of them showed up to one of Fadi’s Mediterranean Grill’s locations on Saturday, an employee who said his name was Fred, told The AANews.

He said most, if not all, of the neighborhoods nearby were badly flooded and homes damaged.

“They were risking their lives to help people, so we wanted to do something to give back,” he said, adding that the restaurant will continue to give out meals to law enforcement until the end of September. 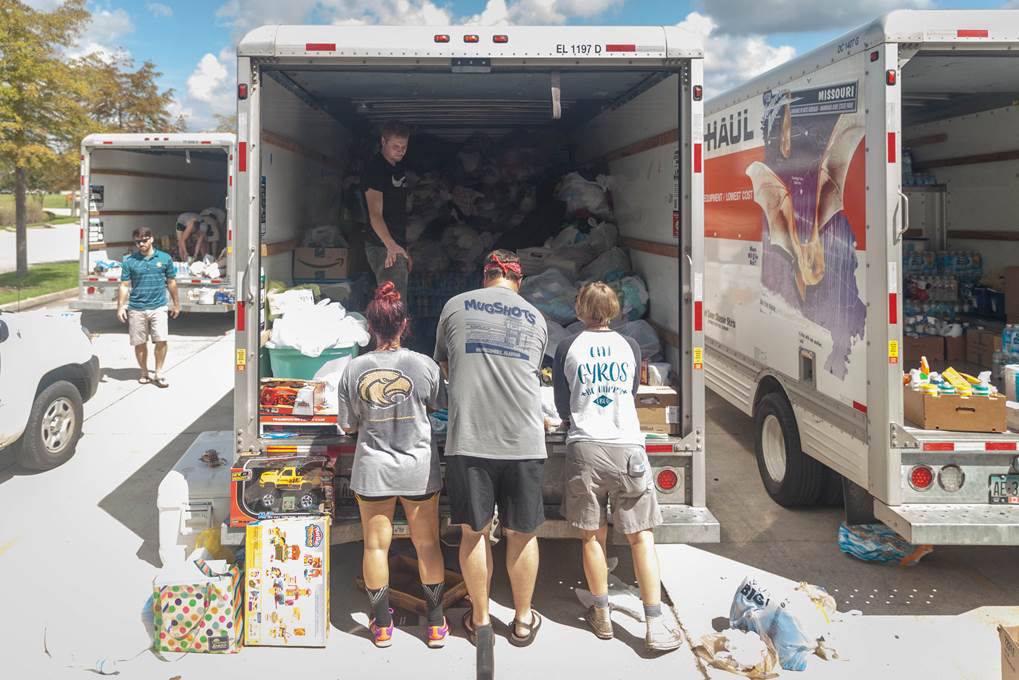 In Michigan, the calls of Harvey’s victims have not fallen on deaf ears. Within hours, dozens from Southeast Michigan’s large Arab American community organized do- nations drives of needed supplies to deliver to Texas.

Several of the community’s copious charity organizations, mosques and residents, including The Amity Foundation and the Lebanese American Medical Society, have teamed up, aiming to send about four semi-trucks full of canned food, bottled water, baby supplies and medicine, among other material.

With rumors of sharia (Islamic) law, some Dearbornites feel a duty to dispel myths and off their help, Amad Elzayat, founder of The Amity Foundation, told The AANews.

“We are a reflection of our community and our religion,” he said. Elzayat said he hopes the calamity in Houston will bring down walls dividing local ethnic groups, houses of worship and political rivals, and that they’ll come together for a greater good.

“We can show that we’re one of the more powerful communities when we come together,” he added.

They’d intended to arrive with sup- plies in Houston on Friday, but circumstances require them to wait until next Wednesday, Rabih Hammoud told other Dearborn residents at the Dearborn Democratic Club on Wednesday. But they remain undeterred.

“This is the real Dearborn,” Hammoud added. Other local activists, like Yemeni Americans Akil Alhalmi and Abdelmalik Aldallali of the Yemen American Leadership Association, have garnered enough support since their calls to action on social media to fill their own semi-truck with supplies.

In separate videos, they urged Arab Americans to donate what they can, even as many households with meager means are already burdened with supporting large families overseas stricken by famine and war.

“I know we have homelands, but this is our country too,” Aldallali said.

Supplies for Hurricane Harvey victims can be dropped off at the HYPE Recreation Center on 23302 W. Warren Avenue in Dearborn Heights.