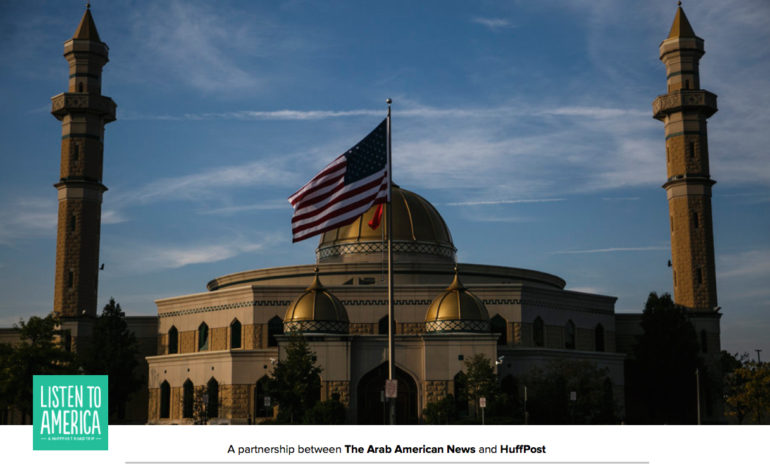 With a large population of Muslim and Arab Americans, Dearborn has the most per capita residents on a shadowy and unaccountable watchlist. It is nearly impossible to find out if you’re on it, let alone get your name off.

DEARBORN, Mich. — There’s a running joke here that has residents talking to an omnipresent Uncle Sam.

Off-color or politically contentious remarks — whether uttered at work, school, the hair salon, the grocery store, the masjid or the shawarma place — are sometimes followed by a person looking up at the ceiling and saying something like: “I didn’t mean it!”

“They’re not looking up at God,” explained Dawud Walid, executive director at the Michigan chapter of the Council on American-Islamic Relations. “They’re looking up because they think maybe there’s a bug somewhere” — a recording device, that is, placed by the U.S. government to listen in on a community with one of the highest concentrations of Arab and Muslim Americans in the country.

“You have to joke about it to relieve some of the anxiety,” said Walid. Dawud Walid, executive director of the Council on American-Islamic Relations Michigan Chapter in Dearborn/ Photo by Sean Proctor for HuffPost

That anxiety has permeated this diverse suburban Detroit community of nearly 95,000 since 9/11. Largely unknown to the rest of the country before those terror attacks, Dearborn has since become the focus of right-wing conspiracy theories, and of America’s sustained and systemic criminalization of Muslim and Arab Americans.

There’s the surveillance. Bank accounts are known to suddenly close. Charities have been shut down. There are wrongful terror arrests. Immigration raids and travel bans rip families apart. (For many Yemeni-Americans here, Walid said, there’s the added cruelty of having to desperately petition the U.S. government to bring family members over from Yemen, where American military supplies are fueling a Saudi-led bombing campaign that has devastated the country.)

Walid, 45, recalls how in 2010 he found a bug underneath his desk at CAIR’s office in the neighboring town of Southfield. He didn’t report finding the bug to law enforcement, he said, because he had a “hunch” it was law enforcement who put the device there in the first place.

The U.S. government would have you believe there are more terrorists or potential terrorists per capita in Dearborn than anywhere else in the country. Leaked intelligence documents obtained in 2014 by The Intercept showed the five American cities with highest number of residents on the “Terrorist Screening Database,” the U.S. government’s watchlist of “known or suspected terrorists” that is used by multiple agencies, including the FBI. At number one was New York City, with a population of over 8 million. At number two was Dearborn, with a population of about 95,000.

The other three cities in the top five — Houston, San Diego and Chicago — all have populations of over a million people.

“It’s just overt and bodacious racial profiling by the federal government’s law enforcement entities on this community, which again has not produced a single terrorist that’s done anything to harm the homeland,” Walid said.

Nasser Beydoun, a 52-year-old local business owner who is the chairman of the board of the Arab-American Civil Rights League, realized about three years ago that he was among the some 700,000 Americans on the watchlist. Nasser Baydoun poses for a portrait in front of a map of the Detroit metropolitan area on Sept. 21/ Photo by Sean Proctor for HuffPost

That designation meant a thorough search of his bags, a full body pat-down, extra body scans and being questioned by agents. After that, it started to happen every single time he took a flight. But it was worst when traveling internationally.

“I would be pulled in, questioned for hours. All my documentation searched, all my credit cards taken pictures of, all my documents, my phones, my electronic devices. They would ask for passwords…” Beydoun said. “God knows what they were doing with it. Then, after three, four hours, they’d say they’d have to call Washington, get cleared, and go.”

One time, Beydoun says he tried to bring his young daughter to a friend’s birthday party in Windsor, Ontario, a short drive over the Detroit River into Canada.

“They held us for four hours,” he said of border agents. “She missed the birthday party. No water, no drinks. Nothing. It was just every time the same routine, the same questions. They would tell you ‘Hey, there’s nothing we can do. The computer tells us we have to do this.’” A Dearborn Arab-American man, who asked not to be identified due to pending litigation, says he’s been detained at the U.S. border over a dozen times, once for eight hours/ Photo by Sean Proctor for HuffPost

Abdullah, a 40-year-old businessman and former school administrator who asked to be identified by a pseudonym due to ongoing litigation related to his presence on the watchlist, said he’d been detained by border agents some 20 times.

“The 8-hour detention was the worst,” he said. “No one talks to you. You’re in a holding cell by yourself. Like a drug dealer or whatever else. They have to come check on you every once in awhile, through the window, to just look that you’re still alive. Then they go back.”

According to the classified documents obtained by The Intercept, law enforcement doesn’t need “concrete facts” or “irrefutable evidence” to place a person on the Terrorist Screening Database. All law enforcement needs to do is meet the broad and ill-defined standard of “reasonable suspicion.”

Moreover, it’s often impossible to get the government to tell you that you are, in fact, on the list. And it’s extremely difficult to get your name removed. Dr. Mohamad Hakim in his office in Dearborn/ Photo by Sean Proctor for HuffPost

Dr. Mohamad Hakim, a 57-year-old surgeon in Dearborn, was questioned and given additional screening at the airport for the first time in May. It happened again in July on a flight to Lebanon.

Frustrated, he filled a redress request with the Deptartment of Homeland Security’s Traveler Redress Inquiry Program (TRIP). “DHS TRIP can neither confirm nor deny any information about you which may be within federal watchlists or reveal any law enforcement sensitive information,” read the letter he received in response from DHS.

In other words: Sorry, but we’re not sorry.

The FBI and DHS did not respond to a request for comment about this story.

“Give me an explanation, why this is happening,” Hakim said. “If I’m a terrorist, at least let me know so I could defend myself. You can’t have the verdict without defending yourself. If you’re guilty of something tell me what I’m guilty of.”

Hakim, Abdullah and Beydoun all say they have no idea why they’d be put on the terror watchlist. They also say they know they’re not the only ones: They all have friends who are constantly harassed or detained at the border.

Beydoun said the watchlist is basically the government creating two lines at the border. A picture of The Ambassador Bridge, connecting Detroit, Michigan to Windsor, Ontario, Canada/ Photo by Sean Proctor for HuffPost

Both Beydoun and Abdullah have ongoing lawsuits against the U.S. government, two of a handful of such lawsuits across the country challenging the legality of the Terrorist Screening Database. Since filing the lawsuits, both have found themselves suddenly removed from the list.

“When we filed the lawsuit, [the U.S. government] told us, ‘Hey. We took Mr. Beydoun off the list. Can you drop the lawsuit?’” Beydoun recalled. “We said no, because it’s not just about me.”

“The only way you can literally get out of there is if you bring a federal lawsuit,” explained Beydoun’s attorney, Nabih Ayad. “And a lot of the people don’t have the resources.”

In Dearborn, there’s concern that under President Donald Trump the aggressive national security apparatus targeting people here is only going to get worse. It was under President Barack Obama, after all, that the terrorist watchlist grew massively in size, ensnaring thousands of Muslim and Arab Americans.

Now there’s a man in the White House who thinks “Islam hates us” ― as if “us” doesn’t already include Muslims.

This story is a collaboration between The Arab American News and the Huffington Post, as part of their “Listen to America” tour.