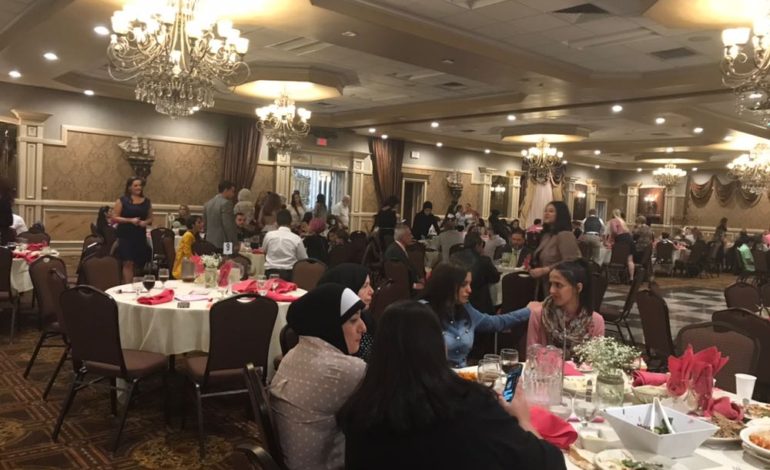 DEARBORN— On Friday, October 20, The Society of Women Engineers (SWE) and The Breast Cancer Student Association (BCSA) hosted their second fundraising dinner called “Get Your Pink On” (GYPO) at Byblos Banquet Center.

The SWE organization at the University of Michigan-Dearborn is a local branch of the SWE national and consists of approximately 200 women pursuing engineering degrees. The BCSA organization at Wayne State University aims to raise awareness and money for breast cancer research and support those who have been affected by the disease.

Ayesha Saleem, event organizer and SWE president, decided to start this event last year because she felt that members of the SWE needed to give back to the community and stand up for all women— not only those in their field.

In late summer last year, Saleem communicated with Linda Baydoun, the president of the BCSA, and decided to hold a fundraiser dinner together in October because they both have loved ones who have undergone breast cancer and are passionate about the cause. Saleem said the money raised will go to Karmanos Cancer Institute to fund women in Detroit who can’t afford their breast cancer treatment.

The event included music, raffle winners and dinner. In addition, Dr. Mohamad Dughayli and Dr. Erin Cobain served as keynote speakers at the event and raised awareness about the disease.

Dughayli has 30 years of experience and is an assistant professor of surgery at Michigan State University, the associate program director of surgery at Henry Ford Wyandotte Hospital and the president of the Arab American Cancer Awareness organization. Cobain has seven years of experience and is a clinical lecturer in the division of Hematology/Oncology at the University of Michigan Hospitals and Health Centers. She specializes in treating patients with breast cancer as well as hereditary breast and ovarian cancer syndromes.

“Recently, we were concerned in establishing a new organization in the community, which is mainly for the fight of breast cancer,” Dughayli said.

The new organization will be named The Arab American Cancer Awareness and although it will initially focus on breast cancer awareness, it will also deal with different types of cancer such as ovarian, oral and colorectal cancer, Dughayli said.

“The new organization will be announced very soon, so we are in the process of establishing our website and it will be available in the coming two to three weeks,” he added. “But we are waiting for the logistic paperwork until we get the license as a nonprofit organization.” he said spreading awareness can only be achieved by addressing the community at local events, where they could address the importance of self-examination and the screening of women so cancer can be diagnosed at an early stage, and also through the establishment of support groups.

He also stressed the importance of diagnosing breast cancer at stages 0 or 1 because it can have an almost 85 percent cure rate.

“Men are involved in 1 percent, so this means that 1 out of 100 men will develop breast cancer during their lifetime,” Dughayli said. “So, we encourage them to get involved in such events and get educated because they have the same genetic risk factors as women.”

He also encouraged the community to participate in all similar events.

“That’s important because breast cancer is the most common cancer in women and 300 women are diagnosed with breast cancer every year, which is very high,” he said.

Mariam Saad, who attended along with her family, said  the event was really successful and helped educate people about the cause because everyone knows someone or has a loved one diagnosed with cancer.

“I would attend every year because it’s for a beneficial cause and you know what you’re supporting, where it’s going and how many people are benefiting just by coming,” Saad said.

A number of men also attended the event. Although there were more women in attendance, the presence of men showed they’re just as interested in learning more about breast cancer and understanding the risk factors.

Ali Sobh, who attended with his friends to support the cause, said  he knows many people who have lost family members to breast cancer, so it was inspirational for him to come.

“There’s always something you can be at risk for, no matter what it is,” he said. “So, it doesn’t matter if you’re a guy or a girl when it comes to breast cancer.”