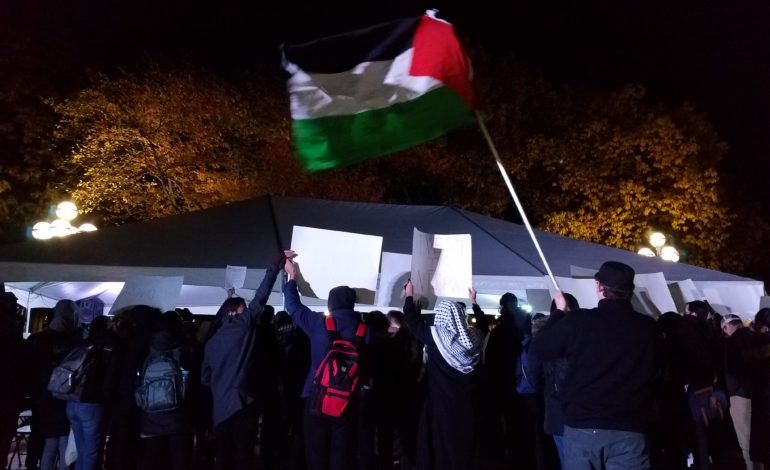 Hundreds stood in peaceful protest in solidarity with Palestine. Photo by The AANews

ANN ARBOR— On November 7, University of Michigan students held their central student government meeting at the campus square, the Diag.

At the meeting, more than 250 people stood in support of the UM-Divest resolution and in solidarity with Palestinians.

Students Allied for Freedom and Equality (SAFE) is a campus organization that launched divestment campaign over the belief that Israel is involved in human rights violations against Palestinians and that companies are aiding in the occupation and in an apartheid system which harms Palestinians.

SAFE said on its website that companies such as Hewlett Packard, Boeing and United Technologies are among ones U of M is invested in that they must divest from.

The resolution, if it were to pass, would allow for the U of M Board of Regents to select a committee to investigate the divestment request.

During the community comments portion of the meeting, attendees spoke for and against the resolution.

One student against the resolution said the Boycott, Divestment, and Sanctions (BDS) movement’s co-founder had been quoted publicly saying he is working toward Israel’s euthanasia.

Later on, a SAFE representative said #UMDivest is not affiliated with the BDS movement and that the resolution is not calling for a boycott or a sanction.

Another student commented that divestment is not a solution, “it is an end.” He said there must be dialog between the Israeli and Palestinian perspectives. Hundreds stood in peaceful protest, in solidarity with Palestinians.

The SAFE co-chair said Palestinians on campus are systematically silenced on campus.

Another student said that during her freshman year on campus, she was blacklisted and called a terrorist for her support of divestment.

The former student government president for UM-Dearborn said the sister campus passed a resolution on divestment earlier this year, so the board of regents would form an ad hoc committee regarding the issue of divestment.

A U of M alumni who identified himself as a Palestinian Christian and is a Palestinian citizen of Israel, said that divestment is not to demonize Jews, but to criticize the policies of the state.

He said he is calling into question if a person believes their Jewishness is directly tied to the oppression of a people.

The resolution will be voted on Tuesday, November 14 at the Modern Languages Building, 812 East Washington Street in Ann Arbor.