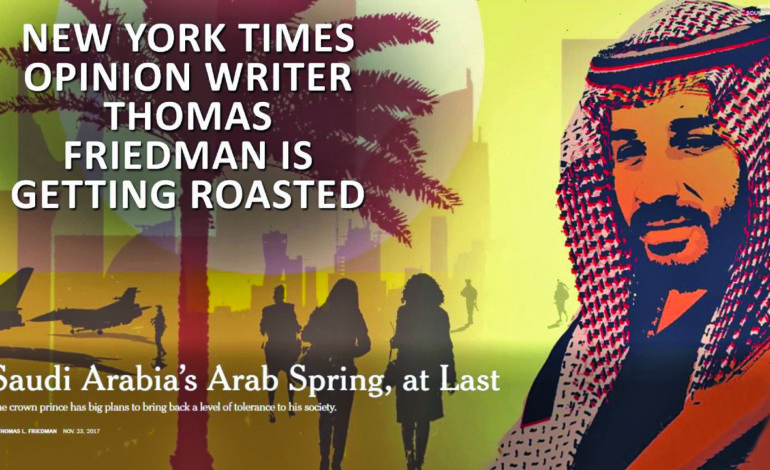 “I’ve never thought much of Friedman’s work, but this is the work of a complete toady.”

“What a nauseating exercise in a…-kissing!” Is Friedman a supporter of the power-hungry crown prince? Does he think that rounding up one’s political rivals, hanging them upside down and beating them with rubber hoses is an acceptable way to conduct an anti-corruption campaign?

Did Friedman know that the object of his man-crush is a reprobate despot who, in the last year alone, oversaw the beheadings of over 150 people?

Saudi Arabia is the most fanatical, retrograde theocracy in the world today. It’s no wonder that a bloodthirsty autocrat like Salman would rule such a kingdom. But how does Friedman fit in with all this? Why would he want to put his reputation on the line for such a dodgy miscreant as Salman? He knows the Saudis are funding extremist madrassas around the world. He knows they’re arming and training jihadists to fight in Syria, and prosecuting a genocidal war of annihilation in Yemen. He also knows that 15 of the 19 hijackers on 9-11 came from Saudi Arabia, the petridish from whence all Salafist terrorism emerges. He knows all of this, and yet he still provides cover for the man by writing a lengthy homage to a Saudi dictator in his weekly article at the Times. Why?

Bill Van Auken figured it out in an article at the World Socialist Web Site. He said:

“…the Trump administration and the predominate layers within the U.S. military and intelligence apparatus have made the Saudi monarchy a lynchpin of their preparations for confrontation with Iran, threatening a region-wide war that would eclipse the devastation wrought by the invasion Friedman promoted 15 years ago.”

That’s what this is all about: Iran. Good old Tommy boy is buffing up Salman’s tarnished image so Washington can use him in their upcoming drive to war with Iran. That’s what’s going on. Friedman is just providing the public relations make-over, y’know, like lipstick on a pig.

It’s not so different than the role he played in the build-up to the war in Iraq. Here’s an excerpt from an article Friedman wrote on November 30, 2003:

“…even though the Bush team came to this theme late in the day, this war is the most important liberal, revolutionary U.S. democracy-building project since the Marshall Plan. The primary focus of U.S. forces in Iraq today is erecting a decent, legitimate, tolerant, pluralistic representative government from the ground up. I don’t know if we can pull this off. We got off to an unnecessarily bad start. But it is one of the noblest things this country has ever attempted abroad and it is a moral and strategic imperative that we give it our best shot.” THOMAS L. FRIEDMAN, New York Times, NOV. 30, 2003.

The United States unleashed holy hell on Iraq, killed over a million of its people, destroyed one of the world’s oldest civilizations, and left the country in a smoldering pile of rubble. But in Freidman’s mind the war was, “One of the noblest things this country has ever attempted.” Is it any wonder why he finds the ghastly Salman so admirable?

There’s no freedom in Saudi Arabia. It’s a lock-down Wahhabist police state where women can be beaten on the streets for not complying with the strict dress-code. Check out this blurb from a piece by Amnesty International on Saudi Arabia 2016-2017:

“The authorities severely curtailed the rights to freedom of expression, association and assembly, detaining and imprisoning critics, human rights defenders and minority rights activists on vaguely worded charges. Torture and other ill-treatment of detainees remained common, particularly during interrogation, and courts continued to accept torture-tainted ‘confessions’ to convict defendants in unfair trials. Women faced discrimination in both law and practice and were inadequately protected against sexual and other violence….Courts imposed many death sentences, including for non-violent crimes and against juvenile offenders; scores of executions were carried out.”

Get the picture? Saudi Arabia is the most reactionary, backwards, repressive country on earth, which is what makes Friedman’s apologia for Salman all the more outrageous. Just listen to kowtowing Tom’s praise for the ‘progressive’ wunderkind, MBS, in the opening paragraph of his fawning masterpiece, “Saudi Arabia’s Arab Spring, At Last”:

“I never thought I’d live long enough to write this sentence: The most significant reform process underway anywhere in the Middle East today is in Saudi Arabia. Yes, you read that right. Though I came here at the start of Saudi winter, I found the country going through its own Arab Spring, Saudi style.

“Unlike the other Arab Springs — all of which emerged bottom up and failed miserably, except in Tunisia — this one is led from the top down by the country’s 32-year-old crown prince, Mohammed bin Salman, and, if it succeeds, it will not only change the character of Saudi Arabia

Fortunately, there’s a group of people who strongly disagree with Friedman; Friedman’s own readers! That’s right, I picked through nearly all of the 664 comments on Friedman’s article at the Times website and, to my surprise, the vast majority of people think the jowly pundit is full of baloney. Here’s what some of them had to say:

“Sorry, but just because Friedman, the perpetual insider and toady for the elite, spent four hours with the crown prince and his cronies is it hardly enough to persuade me that Saudi Arabia is going through an Arab Spring….” Agent Provocateur

“It will be an Arab spring in Saudi Arabia when it is a Saudi president or prime minister who wants to make the changes and not an autocratic, enlightened Saudi dictator, scion of Saudi dictators.” Joshua Schwartz

“So, I guess the wave of tolerance and progressivism comes after the complicity for mass-starvation and willing degradation of their neighbors to the South, Yemen?…. I’m a big fan Friedman, but this a bridge too far.” Tyler

“Throwing your enemies in jail for corruption, tax evasion, etc. without due process is standard procedure for totalitarian regimes.” Joe barron

“The U.S. is implicated in the biggest humanitarian crises in the world caused by Saudi bombing in Yemen (over 200K in danger of cholera death). We are seen as the providers of the bombs and war tools. MBS may be a reformer and that’s good, but war crimes will lead to the instability and eventual fall of the House of Saud. The chaos and excessive violence (bombing of hospitals) doesn’t look good on anyone’s resume. I feel sorry for all parties. An unnecessary blood bath. A black eye for the U.S.” Laxman

“M.B.S is following the playbook of Saddam Husein. The same way Saddam brutally purged everyone else that could oppose him. Stalin did the same thing. Mr. Friedman was wrong on the Iraq war and he is wrong again here. He is glorifying the next Saddam in the region as a “reformer.” Sal

“MBS is as corrupt as any other Saudi prince. Not even a year has passed since he bought a yacht for $400 million on an impulse from a Russian billionaire….MBS is a war criminal. His war with Yemen is at a genocidal stage with no end in sight. MBS’s reckless meddling with regional politics is a JV attempt to increase his stature while moving the region dangerously close to an all out war.

“While MBS has to try to sell this plot to his people, Mr. Friedman should know better that trying to sell it to us.” Shiveh

“Remember 9/11 and all the other funding of al Qaeda, ISIS, al Nusra, and the rest. Putin is not under your bed, but the Saudis fund terrorism.” Mark Thomason

“Um, there is no ‘spring’ it is a power grab with some fake superficial modernizing aspects to appease the Trump administration.” Susan E

“A four hour bull session with a bunch of Saudi thugs is enough to convince Friedman of the legitimacy of their cause? Sorry sir, I don’t buy it.” Ed Kearney

“Friedman was a breathless cheerleader for the Iraq war and is now paving the way for an Iran war.” Baddy Khan

“How lightly, Mr. Friedman, you thread on the hundreds of thousands of Yemeni corpses who received death as a direct result of your interviewee’s policies…” Romain

Does it look like anyone has been taken in by Friedman’s pathetic apologia for the clown prince?

Not really. And some readers have even figured out that Friedman’s real objective is not to gussy up Salman’s thuggish image, but to lay the groundwork for a war with Iran. That’s the real goal, more war.

Israel draws condemnation for forced removal of Palestinian family, demolition of their home