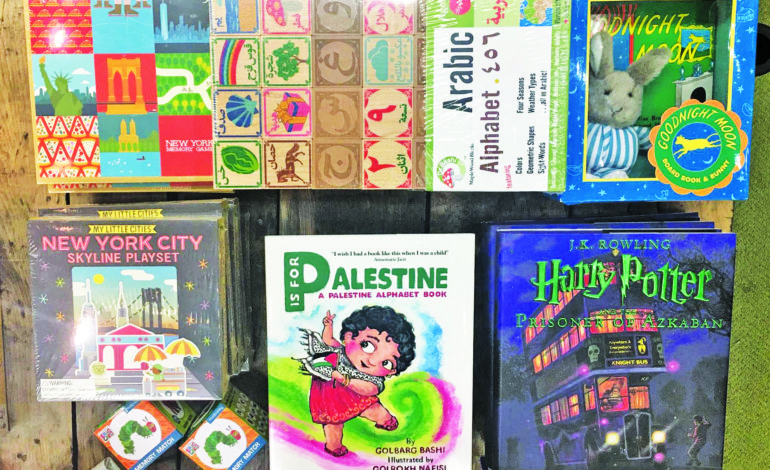 DEARORN/NEW YORK — President Trump sent shock waves around the world and stirred anger among Arabs and Muslims when he recognized Jerusalem as Israel’s capital on Wednesday.

For Palestinians living there, the declaration was a wake-up call that the fight for freedom is far from over. For refugees, it’s a wrench thrown in an already tumultuous conflict to retain their heritage and identities.

Helping Palestinian children cut through the political haystack is Golbarg Bashi, a New York history professor and author of the book “P is for Palestine.”

It was supposed to be a modest project, expected to sell a few copies when Bashi created a fundraising campaign on LaunchGood.com, a Muslim crowdfunding website. Days later, the first edition hard copy was sold out.

“A is for Arabic,” it says in the book. “My tongue, a language that’s the fourth biggest ever sung!”

“I is for Intifada, Arabic for rising up for what is right, if you are a kid or grownup!”

An illustration shows a child on her father’s back flashing peace signs, as they stand before barbed wire. A page from the children’s book “P is for Palestine”

“Intifada”, the Arabic word for “tremor”, refers to two violent Palestinian uprisings in the 1980s and 2000s that killed more than 5,000 Palestinians, combined.

Dozens of readers messaged Bashi after the book’s launch on Nov. 11, thanking her for opening their eyes, while others wanted several copies to donate to their local mosques or synagogues. She was already receiving requests to speak and read her book aloud at local bookstores.

Bashi, an adjunct part-time professor at Pace University and a Columbia University PhD student of Middle Eastern studies, told The AANews she ventured into writing for children because she couldn’t find any literature that Palestinian children could relate to and that would accurately portray the Palestinian struggle.

Her insight and advocacy don’t stem from the lecture hall, but from being a refugee herself.

Bashi was born in a southwestern province of Iran, bordering Iraq. In the late 80s, when she was a child, her family sought refuge in Sweden. There, she befriended Palestinian refugees, some of them 16-year-old orphans.

It was around the time the Palestinian strife first took the world by storm, when there were no social media outlets and television channels presented— at best— unreliable images of the Middle East. Bashi said she wished there was a book to help her Palestinian friends, and it was there that her “moral sense of responsibility was formed.”

After moving to New York to complete her studies, Bashi visited camps in Gaza and still regularly communicates with Palestinian refugees in Lebanon and Jordan. Although Iranian-born, Bashi said she dislikes being racially profiled, wants to focus on the discourse and dismisses anything “sinister” about her efforts.

“My heart beats with the oppressed,” she said.

The 43-year-old activist turned author founded a social-impact startup called “Dr. Bashi” in 2014, after she’d made Persian alphabet wooden blocks for her two children and sold them online. “Dr. Bashi” is aimed at children’s education with a focus on the Arabic-speaking region.

The blocks were a hit, so with the help of other Columbia University faculty and a Vermont-based wood factory, “Dr. Bashi” now sells alphabet blocks in Arabic and Farsi.

Bashi said she wants youth to “have an affinity for their mother language” by using the best tools children could learn from, while honing their motor skills – building blocks.

But even as an adult and for her children, “Islamophobia is still alive,” she affirmed.

Although the book garnered excitement within days, outrage fanned throughout New York City even quicker.

An event post of a local book store appearance angered a group of New York mothers, who posted complaints on Facebook, some calling it nothing but anti-Semitic propaganda.

Since then, the Facebook group “UES Mommas”, which has more than 27,000 members, has been shut down after a meeting with the social media giant.

“The actions of certain members highlight the extreme level of intolerance for varying opinions that is plaguing our world,” a group moderator said online. “We have no interest in maintaining a group that cannot engage in respectful dialogue due to an overwhelming sense of entitlement and zero accountability.”

The book has also been pulled from most New York book stores, including West Side Rag, after it received death threats and pressure from three rabbis at Stephen Wise Free Synagogue (SWFS) and the co-owners of Book Culture.

“We regret that we did not fully appreciate the political or communal ramifications of the children’s book P is for Palestine by Dr. Golbarg Bashi,” wrote the bookstore in a statement. “Nor did we anticipate the pain and distress it has caused in our community [and had we been]…careful and cautious enough…[we would have]…never carried a book contentious in any way.”

Bashi called the reactions a “disproportionate backlash” and said she does not want to allow a small minority with loud voices, to distract from the discussion and the book’s intended goal. However, she has had to cancel public appearances for her safety.

“It would be irresponsible of an author of a book for Palestinian children (or e.g. Native American children) to ignore or whitewash the fact that their people have a resistance movement, most of which is manifested in peaceful protest,” Bashi said.

She said she hopes the book will help other minorities or groups discriminated against relate with each others’ struggles and value solidarity.

“If you show and learn about the African American cause as an Arab child, there is so much you can learn from and get empowered by,” she added.

With “P is for Palestine”, Bashi said she hopes Palestinian children can be proud of a book about their identity, according to how they define it.

“There is something powerful about being able to pick up something positive about your country and culture,” she said.

Individuals, organizations and bookstores can pre-order “P is for Palestine” at www.drbashi.com/books.