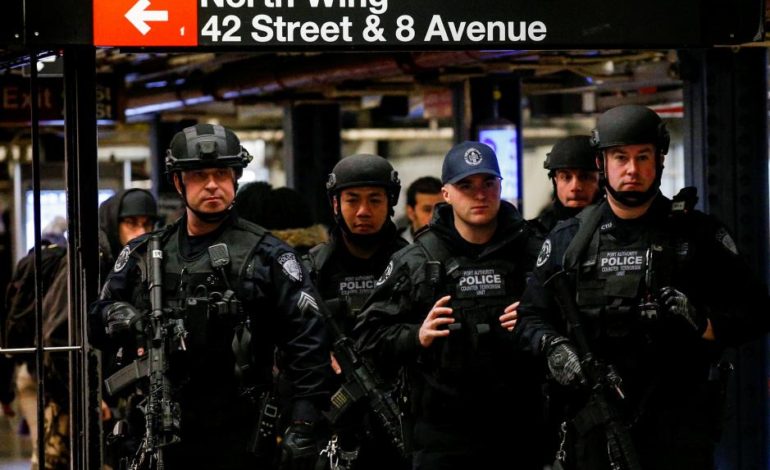 Members of the Port Authority Police Counter Terrorism unit patrol the subway corridor, at the New York Port Authority subway station near the site of an attempted detonation the day before, during the morning rush/REUTERS

NEW YORK — Prosecutors on Tuesday brought federal charges against a Bangladeshi man, accusing him of using a weapon of mass destruction in Monday’s bombing of a Manhattan commuter hub.

Akayed Ullah, 27, was charged in a criminal complaint filed in Manhattan federal court with providing material support to a foreign terrorist organization, bombing a public place, destruction of property by means of explosive and use of a destructive device.

Ullah told police interviewers after the blast that “I did it for the Islamic State,” according to court papers filed by federal prosecutors.

Ullah began the process of self-radicalization in 2014 when he began viewing pro-Islamic State materials online and carried out his attack because he was angry over U.S. policies in the Middle East, prosecutors said.

New York officials on Tuesday also charged Ullah with terrorism, accusing him of setting off a pipe bomb, as investigators in his home country questioned his wife.

Ullah was charged with criminal possession of a weapon, supporting an act of terrorism, and making a terroristic threat under New York state law, the New York Police Department said.

The federal charges, which are expected to take precedence over the state charges, carry a maximum sentence of life in prison.

‘America, die in your rage’

On the morning of the attack, Ullah posted on his Facebook page, “Trump you failed to protect your nation.”

Ullah’s passport, which was recovered from his home, had handwritten notes, including one that read, “O AMERICA, DIE IN YOUR RAGE.”

Investigators at the scene found a nine-volt battery inside Ullah’s pants pocket, as well as fragments from a metal pipe and the remnants of what appeared to be a Christmas tree light bulb attached to wires.

Ullah told investigators he built the bomb at his Brooklyn home one week before the attack, filling the pipe with metal screws to maximize damage. He chose a work day to target as many people as possible.

Ullah began viewing Islamic State propaganda online as early as 2014, including a video instructing supporters to carry out attacks in their homelands if they were unable to travel overseas. He started to research how to build an explosive a year ago.

Investigators in Bangladesh were questioning Ullah’s wife, according to two officials who declined to be identified as they were not permitted to discuss the matter publicly. They did not provide details on the questioning, but said the couple have a six-month-old baby boy.

“We have found his wife and in-laws in Dhaka. We are interviewing them,” one of the police officials told Reuters.

New York police say Ullah set off a pipe bomb in an underground corridor of the subway system that connects Times Square to the Port Authority Bus Terminal at rush hour on Monday morning, injuring himself and three others.

Ullah survived with burns and lacerations and was taken to hospital in police custody. The three bystanders sustained minor injuries.

The NYPD and the Federal Bureau of Investigation were conducting the investigation in conjunction with other agencies through the Joint Terrorism Task Force, and were asking the public for any information about the suspect.

Investigators are poring through data on Ullah’s electronic devices, said a law enforcement official speaking on the condition of anonymity.

There is no evidence that Ullah was in direct contact with any militant group or any other militants, the source said.

Investigators believe at this point that he is a genuine lone wolf, radicalized over the internet. It was unclear where he got the faulty bomb design.

Authorities in Bangladesh began to track down Ullah’s family soon after news of the attack broke and they first found a cousin, said a third official, Mahiuddin Mahmud.

“We learned from his cousin that he had a wife and a baby in Bangladesh,” Mahmud said.

The cousin, Emdad Ullah, told Reuters that Ullah married a Bangladeshi woman about two years ago and she lived in Dhaka, and that Ullah was educated in Bangladesh before he moved to the United States.

Bangladesh’s police chief had told Reuters on Monday that Ullah had no criminal record in his home country, which he last visited in September.

Ullah lived with his mother, sister and two brothers in Brooklyn and was a green card holder, said Shameem Ahsan, consul general of Bangladesh in New York.

A U.S. enforcement official familiar with the investigation into Monday’s attack said officers had found evidence that Ullah had watched Islamic State propaganda on the internet.

“A terrorist is a terrorist irrespective of his or her ethnicity or religion, and must be brought to justice,” the government said in a statement.

“America must fix its lax immigration system, which allows far too many dangerous, inadequately vetted people to access our country,” he said in a statement.

The president also criticized the visa program that allowed Ullah to enter the United States in 2011 because he had family members already in the country, saying such family visas are “incompatible with national security.”

The ban covers people from Chad, Iran, Libya, Somalia, Syria and Yemen seeking to enter the United States. Trump has said the travel ban is needed to protect the United States from terrorism by Islamist militants.

Bangladesh is not among the countries impacted by the ban.