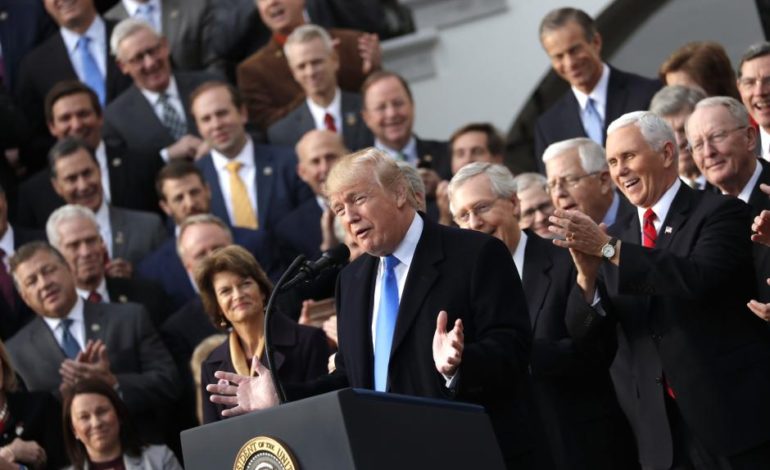 WASHINGTON — The Republican-controlled House of Representatives gave final approval on Wednesday to the biggest overhaul of the U.S. tax code in 30 years, sending a sweeping $1.5 trillion tax bill to President Trump for his signature.

In sealing Trump’s first major legislative victory, Republicans steamrolled opposition from Democrats to pass a bill that slashes taxes for corporations and the wealthy while giving mixed, temporary tax relief to middle-class Americans.

The House approved the measure, 224-201, passing it for the second time in two days after a procedural foul-up forced another vote on Wednesday. The Senate had passed it 51-48 in the early hours of Wednesday.

“We are making America great again,” Trump said, echoing his campaign slogan at a White House celebration with Republican lawmakers. “Ultimately what does it mean? It means jobs, jobs, jobs.”

Trump, who emphasized a tax cut for middle-class Americans during his 2016 campaign, said at an earlier Cabinet meeting that lowering the corporate tax rate from 35 percent to 21 percent was “probably the biggest factor in this plan.”

It was uncertain when the bill would be signed. White House economic adviser Gary Cohn said the timing depended on whether automatic spending cuts triggered by the legislation could be waived. If so, the president will sign it before the end of the year, he said.

The administration expects the waiver to be included in a spending resolution Congress will pass later this week, a White House official told reporters.

In addition to cutting the U.S. corporate income tax rate to 21 percent, the debt-financed legislation gives other business owners a new 20 percent deduction on business income and reshapes how the government taxes multinational corporations along the lines the country’s largest businesses have recommended for years.

Millions of Americans would stop itemizing deductions under the bill, putting tax breaks that incentivize home ownership and charitable donations out of their reach, but also making tax returns somewhat simpler and shorter.

The bill keeps the present number of tax brackets but adjusts many of the rates and income levels for each one. The top tax rate for high earners is reduced. The estate tax on inheritances is changed so far fewer people will pay.

Once signed, taxpayers likely would see the first changes to their paycheck tax withholdings in February. Most households will not see the full effect of the tax plan on their income until they file their 2018 taxes in early 2019.

In two provisions added to secure needed Republican votes, the legislation also allows oil drilling in Alaska’s Arctic National Wildlife Refuge and removes a tax penalty under the Obamacare health law for Americans who do not obtain health insurance.

“We have essentially repealed Obamacare and we’ll come up with something that will be much better,” Trump said.

Democrats were united in opposition to the tax legislation, calling it a giveaway to the wealthy that will widen the income gap between rich and poor, while adding $1.5 trillion over the next decade to the $20 trillion national debt. Trump promised in 2016 he would eliminate the national debt as president.

Opinion polls show the tax bill is unpopular with the public and Democrats promised to make Republicans pay for their vote during next year’s congressional elections, when all 435 House seats and 34 of the 100 Senate seats will be up for grabs.

“Republicans will rue the day they passed this bill,” Senate Democratic leader Chuck Schumer told reporters. “We are going to continue hammering away about why this bill is so unpopular.”

A few Republicans, a party once defined by fiscal hawkishness, have protested the deficit-spending encompassed in the bill. But most voted for it anyway, saying it would help businesses and individuals while boosting an already expanding economy they see as not growing fast enough.

In the House, 12 Republicans voted against the tax bill. All but one, Walter Jones of North Carolina, were from the high-tax states of New York, New Jersey and California, which will be hit by the bill’s cap on deductions for state and local taxes.

Despite Trump administration promises that the tax overhaul would focus on the middle class and not cut taxes for the rich, the nonpartisan Tax Policy Center, a think tank in Washington, estimated middle-income households would see an average tax cut of $900 next year under the bill, while the wealthiest 1 percent of Americans would see an average cut of $51,000.

The House was forced to vote again after the Senate parliamentarian ruled three minor provisions violated arcane Senate rules. To proceed, the Senate deleted the three provisions and then approved the bill.

Because the House and Senate must approve the same legislation before Trump can sign it into law, the Senate’s late Tuesday vote sent the bill back to the House.