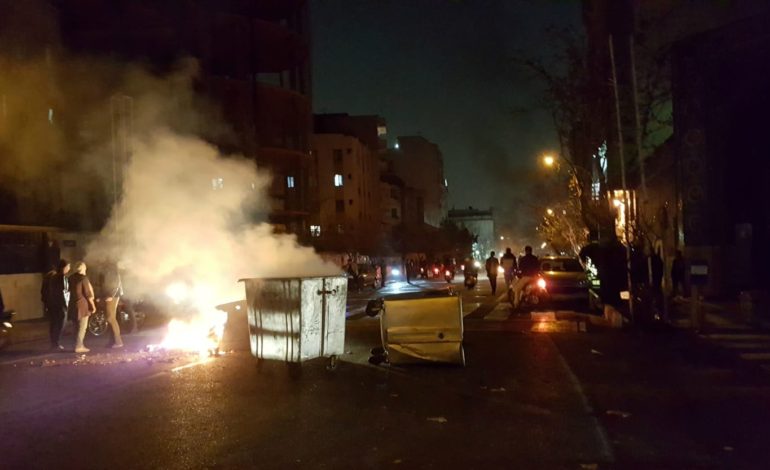 DUBAI — Anti-government demonstrations continued for a fifth day in Iran on Monday, after 10 people were killed during the biggest protests since the pro-reform unrest of 2009.

Video posted on social media showed crowds of people, some chanting “Death to the dictator!”, walking through the streets.

The Fars news agency reported on “scattered groups” of protesters in the capital Tehran and said a ringleader was arrested.

The continuation of protests poses a challenge for clerical leaders as well as President Hassan Rouhani who appeared on TV on Sunday to call for calm, saying Iranians had the right to criticize authorities but must not cause unrest.

“The government will show no tolerance for those who damage public property, violate public order and create unrest in society,” Rouhani said. Hundreds of people have been arrested, according to officials and social media sites.

Unsigned statements on social media urged Iranians to demonstrate again in Tehran and 50 other towns and cities.

“Some armed protesters tried to take control of some police stations and military bases but they met strong resistance from security forces,” state TV said. It gave no further details and there was no independent confirmation.

State television said 10 people were killed in several cities on Sunday night and showed footage of damage to property. It did not elaborate.

Police in Tehran fired water cannon on Sunday to disperse demonstrators, according to pictures on social media.

Frustrations over economic hardships and alleged corruption erupted in Iran’s second city of Mashhad on Thursday and escalated into calls for the religious establishment in power since the 1979 revolution to step down.

Some of the anger was directed at Ayatollah Ali Khamenei, breaking a taboo surrounding the man who has been supreme leader of Iran since 1989.

In the western city of Kermanshah Iranians chanted “Death to Khamenei!” and “If you fight, we will fight!”.

Iran is a major OPEC oil producer and regional power but frustrations have grown at home – where youth unemployment reached 28.8 percent last year – while the country is deeply involved in Syria and Iraq as part of a battle for influence with rival Saudi Arabia.

Those foreign interventions are resented by many Iranians who want their leaders to create jobs instead of engaging in costly proxy wars.