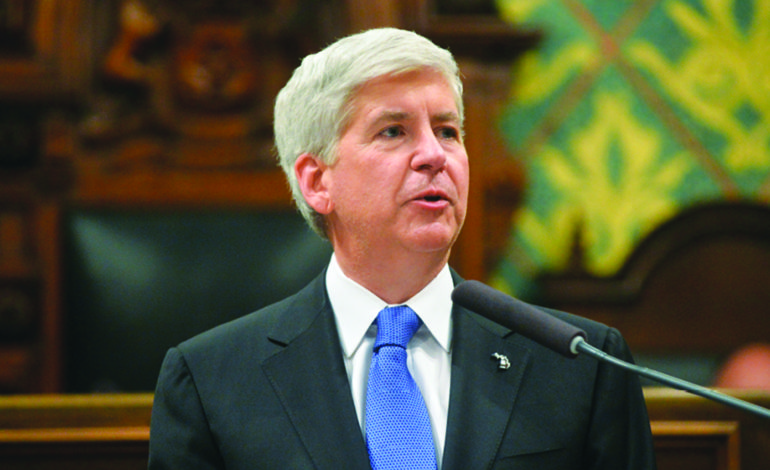 Gov. Rick Snyder during his final State of the State address - Photo from Michigan.gov

LANSING — A number of leaders across Michigan offered unenthusiastic reviews of Gov. Snyder’s final state of the state address.

Snyder began his speech on Tuesday by boasting about a headline from the Wall Street Journal entitled, “Michigan’s comeback story.”

“Folks, we’re back and we’re only going to keep going up,” Snyder said.

Snyder told a joint session of the legislature that Michigan has enjoyed a tremendous recovery and, “Now we’re accelerating this comeback into the future.”

But not everyone was cheering.

State Rep. Abdullah Hammoud (D-Dearborn) said he feels the governor may be listening to the wrong people when assessing his success.

“While we heard the governor talk a lot about how he believes the state is succeeding under his administration, many Dearborn residents are living a different reality,” Hammoud said in a statement issued following Snyder’s address. “This past year, the Michigan legislature passed sweeping proposals and tax shifts that benefit millionaires and developers, but there have been no resulting improvements to our state’s economy and few jobs to show for it. For Michigan to truly become the ‘Comeback State’, we must urge Gov. Snyder and the legislature to invest in policies that revitalize the economy for more than just a select few.

“Recently, our state lost out on a major corporation, Amazon, setting up a second headquarters in Michigan,” Hammoud added. “The rationale for not choosing Detroit was poor public transit and a lack of an ability to attract talent. It was great to hear the governor talk about skilled trades, but enough talk. We need to act on this critical issue now.”

Snyder, who spoke for 53 minutes, praised huge progress in state government finances and prospects for Detroit after it emerged from the nation’s largest municipal bankruptcy, which he initiated.

“Remember what Detroit was like 10 years ago?” he asked. “The progress has been incredible.”

Both in Detroit and statewide, “We have more work to be done, but we’re headed back in a positive fashion,” Snyder said.

“Michigan is struggling,” Abdul El-Sayed, former executive director of the Detroit Health Department and a current Democratic gubernatorial candidate, said in an emailed statement to his supporters. “That’s the truth. We live in a state where few have access to good jobs that pay a living wage. Our schools are underfunded. Our teachers haven’t gotten a raise in five years. And healthcare costs keep too many people from the care they need. Children in Flint still don’t have access to clean water.”

Progress Michigan, the Michigan Education Association, the American Federation of Teachers Michigan and the AFL-CIO also responded to Snyder’s address.

“The last eight years of the Snyder/Calley administration and complete GOP control of the state has been punctuated by privatization disasters like the Aramark contract, broken promises like a complete lack of FOIA reform and unprecedented man-made disasters like the Flint Water Crisis,” Lonnie Scott, executive director of Progress Michigan said. “Corporate donors like Betsy DeVos and billionaire developers have had the red carpet rolled out and the rules rigged for their personal agendas, while working families have struggled to make ends meet. Elected leaders like Rick Snyder and Bill Schuette don’t have the right priorities for Michigan.”

“The fact is we have tremendous potential to grow our own talent right here in Michigan through our public schools, if we create an education system that truly prepares students for the critical thinking and problem solving skills needed to get a great job,” said Paula Herbart, president of the Michigan Education Association. “For our students’ futures, we can’t afford to continue the DeVos education agenda that has been championed by Rick Snyder, Brian Calley and Bill Schuette.”

“The happy talk pushed out by Gov. Rick Snyder doesn’t match up with what working families have experienced over the last eight years,” Michigan AFL-CIO President Ron Bieber said in a statement. “Total Republican control of state government for nearly a decade has led to crumbling roads, attacks on collective bargaining and unaccountable corporate tax handouts to wealthy campaign donors. Michigan needs a new direction. From the Flint Water Crisis to the unemployment insurance debacle, it seems like there’s been a new disaster every year because of Republican mismanagement and wrong priorities.”

Snyder called for an A to F grading system for K-12 schools and said he would soon propose the largest per-capita student grant in 15 years.

“Looking back at the past year and the entirety of Gov. Rick Snyder’s tenure, it’s been a rough go for educators, school employees, students and the public education community,” David Hecker, the president of AFT Michigan said. “Thanks to the influence of wealthy donors like Betsy DeVos, Republican elected officials have allowed $1 billion a year to flow to charters with little accountability, which has resulted in a disjointed and inequitable education system. We know Michigan’s public schools are underfunded and funding cuts to higher education have resulted in increasing tuition costs.”

“While Michigan has recovered for some, many residents are still struggling,” Gilda Jacobs, CEO of the Michigan League for Public Policy, said in a statement. “They may have jobs, but they’re still living in poverty. Our schools and our students are still woefully behind, ranking in the bottom 10 nationally. Our roads, bridges and water systems are still falling apart. Lead is still a threat in Flint and around the state. And dramatic racial disparities continue to exist, as Michigan ranks worst in the nation for African American child well-being. This is the Michigan no one is talking about and the Michigan we will continue to get if state lawmakers continue to cut. We need a better state for all, not just some, and that’s going to require leadership by the governor and action by the Legislature.”

On Flint, Snyder said the city has made huge strides in both water quality and economic development since a lead poisoning public health crisis that began in April 2014, but he acknowledged there is more work to be done.

The governor proposed little in the way of new initiatives, but said he will announce plans in his upcoming 2019 budget to expand the $1.2 billion road funding deal that was narrowly approved by the legislature in 2015, but so far has not resulted in dramatic improvements in the quality of state roads.

“I’m going to ask for additional budget dollars to go even faster … to get rid of those potholes,” Snyder said.