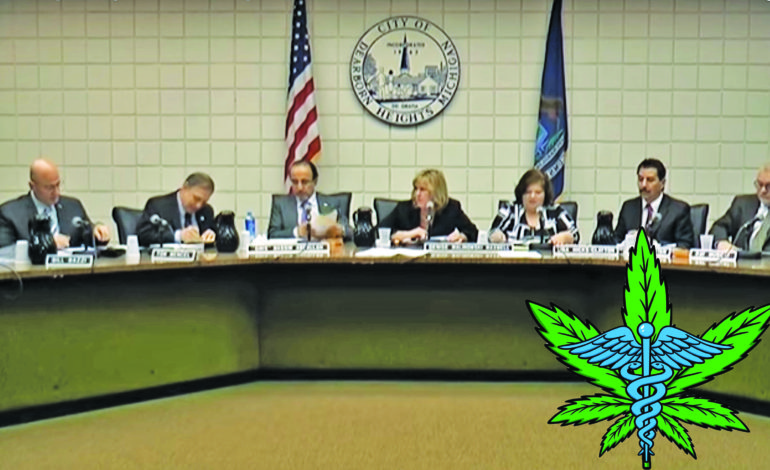 The Dearborn Heights City Council discusses whether to adopt an ordinance allowing medical marijuana shops to open in the city, Jan. 23

DEARBORN HEIGHTS — As federal officials and states remain in a tug of war on the legality of marijuana, cities across the nation where the consumption of the drug is permitted on some level are grappling with whether to allow dispensary stores in their neighborhoods.

In Dearborn Heights, residents of the largely bedroom community are voicing support and concerns at City Council meetings regarding implementation of a licensing ordinance, as required by the Michigan Marihuana Facilities Licensing Act (MMFLA).

Some contend the stores would attract crime and fuel an opioid epidemic, while others attest to its medicinal value and potential revenue it would bring, amid Mayor Dan Paletko’s recently outlined plans to revitalize the city’s business corridors.

Michigan has already allowed medical marijuana for a decade, but Michiganders are expected to vote on legalizing cannabis recreationally this November.

At its January 23 meeting, the City Council began hearing public comments from residents, business owners, nurses, attorneys, medical patients and police officers about the issue to help them decide on the vote. The issue had already been a hot topic in the Council chambers for about four years, but those discussions were based on the 2008 Michigan Medical Marihuana Act.

The MMFLA creates a regulatory system for five different types of marijuana facilities: Growers, processors, retailers, secure transporters and testing laboratories, said Doug Mains, a Lansing-based attorney speaking on behalf of Michigan Alternative Relief. Under the act, municipalities can choose the type, location and distance from schools and religious centers, among other requirements, he added.

Mains said he helped draft an ordinance that the Council deliberated on during the meeting.

“What you have in front of you is simple and complaint with the MMFLA,” he said.

Deborah England, a resident sporting a “Trump” t-shirt, referenced the sign welcoming drivers into the city that reads “The City with a Future.”

“If you vote to bring this illegal drug into our city, how can we be a city with a future,” she told Councilmembers. “If you’re looking at it from a money standpoint, money is not gonna pay for all the trouble that that gives us.”

England addressed worries that property values would decrease and deter potential residents in the market for a home and businesses seeking to open up in Dearborn Heights, with dispensaries nearby.

Susan Todd, a resident and retired nurse, attested to the medical benefits of cannabis, but said it didn’t belong in a closed bedroom community dotted with churches, mosques and schools.

Councilman Ray Muscat said he brought the issue to the table because dispensary owners often seek guidance on opening shop in Dearborn Heights, and not having a system in place is “getting to be expensive for the city.”

“They need to know what’s going on,” Muscat said. “It needs to be put to bed.”

Other councilmembers, including Dave Abdullah, and City Attorney Gary Miotke, took issue with the ordinance they were studying, as it was drafted by individuals who had “something to gain” from opening a dispensary.

Abdullah and Councilwoman Lisa Hicks-Clayton also urged that the Council hold additional better-publicized meeting so it can hear more points of view, as previous ones have attracted mostly pro-marijuana attendees.

A motion passed to table the discussion for a future study session and another open meeting, so that newly elected Councilmembers Denise Maxwell, Bill Bazzi and Tom Wencel could speak to more residents and stakeholders and make a more informed decision before voting on an ordinance.

During its Jan. 9 meeting, the Council voted to nominate Maxwell and Bazzi, both the top vote-getters in the November 7 general elections, as the Council chairwoman and chairman pro-tem, respectively.