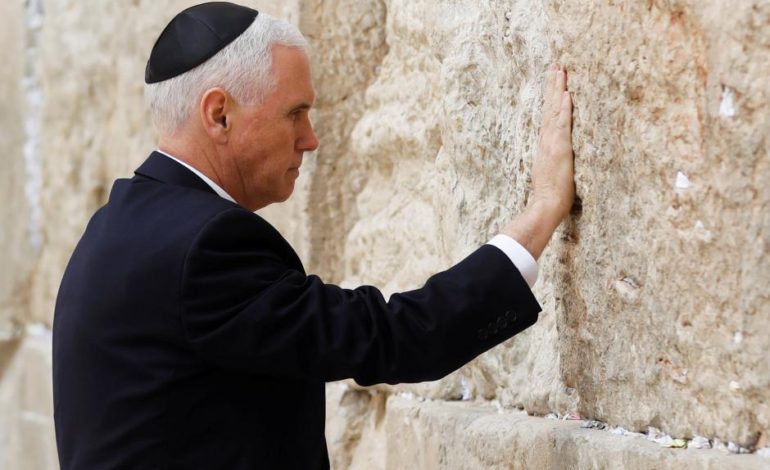 The real danger of seeing the world through a narrow ideological lens is that while the lens may be your own, the world being viewed through it is not yours to control.

Vice President Pence’s recent foray into Middle East politics has been nothing short of a disaster. Because he sees the world through the lens of right-wing Evangelical Christianity, he trampled on regional realities, leaving a mess in his wake.

One might have hoped that American political leaders had learned the dangers of an ideologically-driven foreign policy from the failed presidency of George W. Bush. Bush, whose world view was a mish-mash of Evangelical and neo-conservative doctrines, led the U.S. into a disastrous invasion of Iraq. Guided by ideology, Bush saw that war as a necessary battle of good versus evil that would inevitably be won by the “good.” As his administration framed the war: The tyrant would be overthrown, America would be celebrated as the liberator of Iraq, democracy would take root and then spread throughout the entire Middle East. To the true believer—it was that simple. Reality dictated otherwise.

What the ideologues hadn’t factored into their simplistic vision were complex regional realities; in particular, the history and social make-up of Iraq’s people and the ambitions of its neighbors. Within short order, the country descended into a sectarian civil war, Iran gained a foothold in Iraq, becoming an emboldened regional force; and U.S. troops became ground down in a long, deadly and demoralizing war—with still unfolding consequences.

The real danger of seeing the world through a narrow ideological lens is that while the lens may be your own, the world being viewed through it is not yours to control. What you see may “fit” your understanding of the way “things ought to be”, but the reality your lens filters out won’t “behave” or go away just because you deny or don’t acknowledge that it exists.

Pence’s recent descent into Middle East’s troubled waters displayed this same ideological blindness. His heterodox Christian faith celebrated President Trump’s recognition of Jerusalem as the capital of Israel, because he sees Israel as the fulfillment of biblical prophecy and a necessary prerequisite for the “final days” leading to the second coming of Christ and the conversion of the Jews.

At times Pence’s visit to Israel appeared to be more of a religious pilgrimage than a diplomatic mission. His speech before the Israeli Knesset was filled with biblical references and theological imagery. He mentioned Abraham and David and spoke of the Jewish exile and their coming to the Promised Land (both of which he brazenly compared to the American experience). And he concluded with this:

“Israel is like a tree that has grown deep roots in the soil of your forefathers, yet as it grows, it reaches ever closer to the heavens. And today and every day, the Jewish state of Israel, and all the Jewish people, bear witness to God’s faithfulness…It was the faith of the Jewish people that gathered the scattered fragments of a people and made them whole again…and it was faith that rebuilt the ruins of Jerusalem and made them strong again. The miracle of Israel is an inspiration to the world.”

This almost breathless ecstatic testimonial wasn’t all that Pence said. He made a not-so-oblique reference to the Trump administration’s hoped for so-called “Israel-Sunni” alliance, saying “long-standing enemies are becoming partners…the descendants of Isaac and Ishmael are coming together in common cause as never before.” In near biblical language, he pledged to “drive radical Islamic terrorism from the face of the Earth.” He also noted that the U.S. has “redirected funding [from traditional aid groups that provide relief and reconstruction assistance to all groups impacted by war]…and, for the first time…providing direct support for Christian [whom Pence has referred to as “our fellow Christians”] and other minority communities” in Iraq.

What Pence’s ideology did not allow him to see was that by his full-throated embrace of a biblically-inspired vision of Israel, he put the final nail in the coffin of a U.S.-led peace process. Only once, in passing, did Pence even mention Palestinians.  Because he could not see Israel doing wrong, he made no mention of the harsh occupation or settlement expansion. And Palestinian Christians, who refused to meet with Pence in protest of the U.S. embassy move, were not included in Pence’s beleaguered “fellow Christians” needing U.S. support.

What Pence also wasn’t able to factor into his distorted view of the region is just how irreconcilable his stance on Israel and Jerusalem are with the deeply held sensibilities of the Arab World’s leaders and peoples. While Egypt’s and Jordan’s leaders met with the vice president, they kept him at arm’s length (and, in the case of Egypt, did their best to keep press away). What the U.S. appears not to understand is that despite Arab leaders’ concerns with Iran and extremism, they are not about to trample on Palestinians and their rights in Jerusalem in order to join forces with or normalize ties with Israel. In fact, Trump’s embassy move and Pence’s performance, if anything, have fueled extremist currents, emboldened Iran and put the U.S.’ Arab World allies at risk.

Finally, a word about Pence’s efforts to reprogram U.S. aid toward Middle East Christians. While celebrated by Evangelical Christians in the U.S., this move has been criticized by the hierarchy of the Middle East Christian churches. While every religious community has suffered at the hands of ISIS, there is no doubt that Arab Christians and other regional minorities were singled out by the extremists for the harshest treatment. Nevertheless, the region’s Christian hierarchy fears being too closely embraced by the U.S. or singled out for special treatment, since that would exacerbate sectarian tensions, putting them at greater risk in their own countries.

In the end, the only group celebrating Pence’s pilgrimage to the region is the far-right in Israel. He embraced their vision of a Jewish state in their “Promised Land” and ignored Palestinian rights. This uncritical support has already further emboldened them to accelerate their efforts to expand settlements, annex the occupied territories and bury, once and for all, hopes for a just and lasting Israel-Palestinian peace—thus demonstrating, once again, how adherence to blind ideology can be a dumb and dangerous way to shape foreign policy.