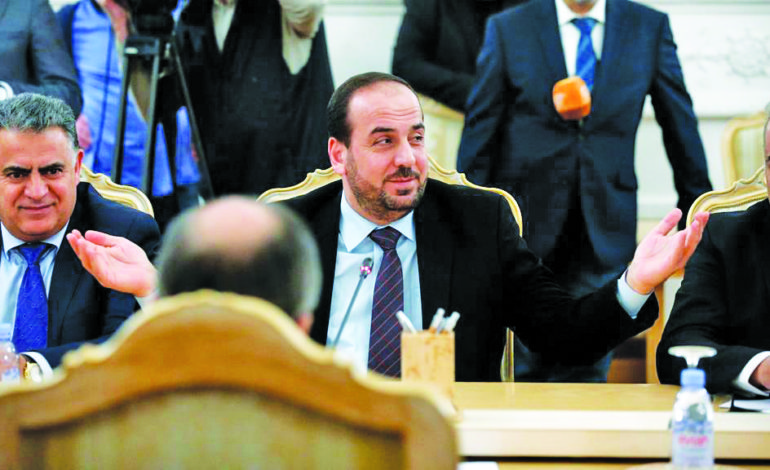 ISTANBUL — Syria’s opposition will cooperate with proposals made at a Russia-hosted conference this week to rewrite the country’s constitution as long as the process remains under U.N. auspices, the chief opposition negotiator said on Thursday.

Participants at Tuesday’s meeting in the Black Sea resort of Sochi in Russia – which is a powerful supporter of President Bashar al-Assad – agreed to set up a committee to change the Syrian constitution and called for democratic elections.

The main Syrian opposition negotiating group had boycotted the gathering, while the United States, Britain and France also stayed away because of what they said was the Syrian government’s refusal to properly engage.

However, chief opposition negotiator Nasr Hariri said the Syrian Negotiation Commission would “work positively” with the proposed committee because responsibility for setting it up had been handed to the U.N. Syria envoy, Staffan de Mistura.

Damascus welcomed the results of the Sochi meeting.

“The final statement of the conference confirmed the consensus of Syrians on … preserving the sovereignty and unity of Syrian territory and people, and the exclusive right of the Syrian people to choose their own political and economic system,” the Foreign Ministry said in a statement.

It made no mention of the decision to set up a committee to rewrite the constitution or the call for democratic elections.

Four years of on-off United Nations-mediated peace talks have yielded little progress toward ending the seven-year war, but De Mistura has pressed ahead with efforts for a political solution.

On Tuesday, he said the constitutional committee agreed in Sochi “will become a reality in Geneva”, where most of the U.N.-led Syria peace talks have been held. De Mistura also said he would decide the criteria for committee members and select about 50 people – from government, opposition and independent groups.