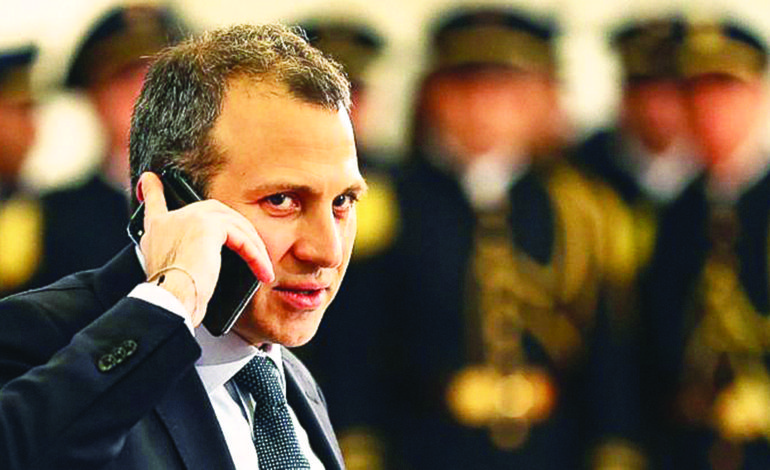 In the last decisive moments, Lebanon avoided the edge of a cliff and perhaps saved fragile peaceful coexistence among its people, which for the past few days has been hovering over that fine edge.

A telephone call from President Michel Aoun to Parliament Speaker Nabih Berri was enough to defuse a potential civil war that would have consumed the tiny nation and brought it back to the civil war era of the last century.

Certainly the Lebanese people felt the imminent danger as the ghosts of war roamed through the streets of Beirut’s suburbs, ignited by a leaked videotape of Foreign Minister Gebran Bassil calling Berri “a thug.”

Nabih Berri is not only the longtime speaker of Lebanon’s parliament, but he is also the leader of Amal Movement, a main political party and a major partner in the current Lebanese government.

Gebran Bassil is the son-in-law of Aoun and the leader of the Free Patriotic Movement (FPM).

The row between Amal Movement and the Free Patriotic Movement has shattered a rare moment of national unity that saved Lebanon from strife during the crisis over Hariri’s shock resignation in November, which he later rescinded.

The standoff has exacerbated a political standoff between Berri and Aoun, threatening to ignite sectarian tensions before a parliamentary election scheduled in May and to paralyze government.

The tensions have also shaken Aoun’s important ties with Hezbollah, whose links to Berri and Amal Movement run much deeper than its political alliance with the FPM, which was founded by Aoun and is now led by Bassil.

The FPM said on Tuesday that Bassil had already expressed regret for the comments and that it regarded the issue as over. Berri said on Wednesday he must apologize “to the Lebanese people” for the ugly remark.

The video, which included sectarian language and harsh words by Bassil against Berri, went viral on social media, sparked violent protests by Berri’s supporters followed by a standoff between them and the supporters of the FPM, which came out into the streets carrying weapons, in an incident that seemed closer to the simulation of an incident in Ain al-Rummaneh, another suburb of Beirut, which sparked the civil war in 1975.

You would think the Lebanese have learned from the hard times and the devastation of 15 years of civil war that consumed everything in their country. If they forgot what it feels like, all they have to do is look around at other countries near them that are ablaze and take notes. They should know that the only time a mistake is truly permanent is if you don’t learn from it.

Even though many Lebanese have condemned the violence in the streets, they blame Bassil’s loose tongue and arrogance. The language he used should have no place in the political discourse of the Lebanese politics.

As Lebanese have always enjoyed a great deal of freedom of speech, which is unmatched in many of the Arab countries, their political leaders usually differ but with respect even when their views are sharply opposite. Bassil, obviously, made a terrible mistake that could have been very costly to the people of his nation. He needs to step up to the plate and correct his mistake. People in power make mistakes, and he made a terrible one. He should apologize to the speaker and to the Lebanese people. It has been said that ” it’s not how you make mistakes, but how you correct them that defines you.”

Equally disgusting are the attacks and the verbal insults directed against President Aoun and his family. The filth that came out of the mouths of some Lebanese protesters must be condemned by the Lebanese people with no exception. President Aoun must be commended for his demeanor and responsible remarks in addressing the crisis.

“What happened on the ground is a big mistake based on a mistake,” Aoun said in a statement. “I forgive all those who assaulted me and my family, and I look to those who insulted each other to forgive each other.”

While Lebanese factions on both sides of this emerging conflict take sides and point fingers, and perhaps guns, at each other, Israel is threatening their territorial integrity and marching forward to steal their wealth of oil and gas, exploiting their internal division.

In this sense, the Israeli intervention at this time imposes a new order of priorities to all Lebanese, which makes the feud between the Amal Movement and the Free Patriotic Movement a minor issue, regardless of its sensitivity, in comparison to the external threat to Lebanon’s oil rights and sovereignty over its territorial waters, which requires a comprehensive national plan to confront the present danger.

The question is would the Lebanese leaders succeed in heeding their petty differences and attending to more pressing issues?

What Turkey’s rapprochement to Israel means for the Palestinian State