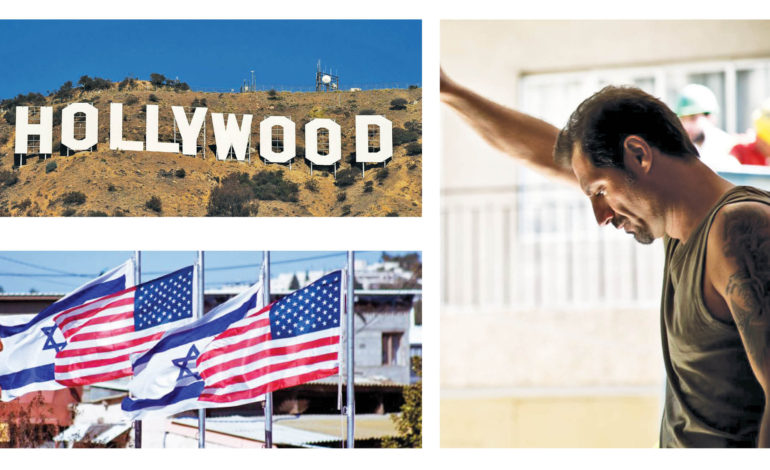 Not so subtle agenda – Hollywood, Washington and Israel sprung from the same DNA.

Hollywood and Washington have been two faces on the same coin for the past century, where political messages have often been imported through Hollywood’s media content.

As renowned scholar Jack Shaheen has pointed out through in-depth research, Hollywood has long projected a Zionist agenda through its means of importing media content to the rest of the world, especially in its depictions of Arabs and Muslims as villains.

The late Jack Valenti,  former president of the Motion Picture Association of America, was fond of saying, “Washington and Hollywood spring from the same DNA.”

“If Valenti were alive today, however, he would have to add to the mix Israel’s DNA,” Shaheen said.

This Israeli connection in American cinema stems back to 1979 when cousins Menachem Golan and Yoram Globus, two Israeli producers with a political agenda, purchased majority stock in Cannon Films. During their tenure, several films vilifying Muslims and Arabs were made.

It is of no surprise that “The Insult”, which is set in Beirut and directed by a Lebanese-born Israeli sympathizer, Ziad Doueiri, earned an Oscar nomination this year for the foreign language film category.

Doueiri, 54, who holds dual citizenship in Lebanon and the U.S., has made public remarks that sympathize with Israel. He also lived there for 11 months to film his 2012 movie, “The Attack.”

“The Insult” revolves around the story of a Lebanese Christian and a Palestinian Muslim refugee who argue over a minor incident that gets blown out of proportion and ends up dividing the community within the historical context of the Lebanese civil war.

“The Attack”, filmed with an Israeli cast, tells the story of an award-winning surgeon who is shocked to discover that his wife was responsible for a suicide bombing that killed 17 people.

“I thought I made a fair movie, a movie that was complex, that shows there are two sides of the narrative,” Doueiri told Newsweek about “The Attack” in a recent interview. “There is the Israeli narrative. There is the Arab narrative.”

Later in the interview, he said he met Israelis, some of whom had served in the Israeli army during its invasion of Lebanon in 1982.

“It made me feel very uncomfortable at first,” he said. “But then they tell you they didn’t want to be there. You talk, and it demystifies your enemy. This Darth Vader image of the Jew falls apart.”

Lebanon, along with 22 Arab League members, boycotted “The Attack” and anti-Zionist critics are lobbying to boycott “The Insult” as well because the movie portrays Palestinians as responsible for the atrocities committed during the 1975 -1990 Lebanese civil war.

Given Lebanon’s long history of war with Israel, where Israeli forces repeatedly attacked Lebanon on several counts and occupied southern Lebanon from 1978 to 2000, Doueiri’s remarks and movie work did not sit well with anti-Israeli critics in Lebanon and the Arab world.

“We are at war with Israel,” Pierre Abi Saab, deputy editor-in-chief of Lebanon’s Al-Akhbar newspaper, told The New York Times. “And when you are at war, you can’t deal with them like a neighboring country.”

“As a Palestinian today, you must prove that you’re with human rights and freedom of expression,” Doueiri told Newsweek. “Aren’t you asking for the occupation to end? Then show me that you’re worthy, that you want a land of freedom. Don’t go banning movies.”

In a critical look at the Oscar nominations, could it be that Doueiri’s Israel-friendly content and remarks gained him international recognition through Hollywood? This is the first time that a Lebanese-related movie received an Oscar nomination.

This is not the first time that a movie with ties to Israel has been boycotted in Lebanon. The action movie “Wonder Women” was also banned in Lebanon because its lead actress, Gal Gadot, is an Israeli citizen who served in the Israeli occupation army during the Israeli war on Lebanon in July 2006.

Lebanese authorities have also called for a ban on “The Post”, a movie by American film maker Steven Spielberg about the 1971 release of the Pentagon Papers. The Arab League Boycott Office of Israel has Spielberg on its boycott list.

The authorities reportedly have no issue with the movie’s content. Instead, the boycott targeted Spielberg himself because his foundation donated $1 million to relief efforts to Israel after its 2006 war on Lebanon, which resulted in the death of more than 2,300 Lebanese mostly civilians and wrecked tens of thousands of homes.