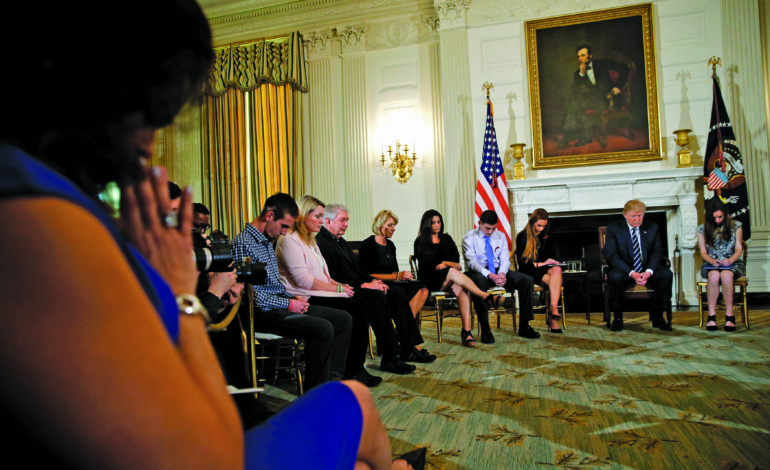 WASHINGTON / TALLAHASSEE, FL — Students galvanized by the deadly mass shooting at a Florida high school confronted lawmakers on Wednesday with demands to restrict sales of assault rifles, while President Trump suggested arming teachers as a way to stop more rampages.

The unprecedented lobbying effort by groups of teenagers and parents at the White House and at the Florida statehouse in Tallahassee played out as fellow students staged classroom walkouts and rallies in cities across the country.

Trump held an emotional, hour-long meeting with students who survived the Florida shooting and a parent whose child did not. He said arming teachers and other school staff could help prevent future mass shootings, voicing support for an idea backed by the powerful National Rifle Association gun lobby.

The Republican president, who has championed gun rights and was endorsed by the NRA during the 2016 campaign, said he would move quickly to tighten background checks for gun buyers and would consider raising the age for buying certain types of guns.

The attack at Marjory Stoneman Douglas High School in Parkland, Florida, where 17 students and educators were killed on Feb. 14 in the second-deadliest shooting at a public school, has revived the long-running debate over gun rights.

Investigators said the assault was carried out by a 19-year-old former Stoneman Douglas student, who purchased an AR-15-style assault weapon nearly a year ago.

“[The shooter] was able to purchase an assault rifle before he was able to buy a beer,” said Stoneman Douglas student Laurenzo Prado, referring to a Florida law that allows people as young as 18 to buy assault weapons.

“The laws of the country have failed,” he told reporters at the Florida state capital.

Lawmakers in Tallahassee said they would consider raising the age limit to 21, the same standard for handguns and alcohol, although the state Senate opted on Wednesday not to take up a gun control measure.

The Constitution protects the right of Americans to bear arms, a measure fiercely defended by Republicans. However, Trump has come under pressure to act.

Trump spoke at length during the televised White House “listening session,” attended by students, parents and people affected by other school shootings, about how armed teachers and security guards could frighten off potential shooters and prevent more deaths.

“If you had a teacher … who was adept at firearms, they could very well end the attack very quickly,” he said, while acknowledging the proposal was controversial. Some of the meeting participants indicated support. Others were opposed.

Mark Barden, whose son was killed in the 2012 Sandy Hook Elementary School shooting in Connecticut, said his wife, Jackie, a teacher, “will tell you that school teachers have more than enough responsibilities right now than to have to have the awesome responsibility of lethal force to take a life.”

Trump listened intently to ideas from about 40 people, including those from six students who survived the Florida shooting.

Trump sat in the middle of a semi-circle in the White House State Dining Room. Photographers captured images of his handwritten note card with questions and responses such as: “What would you most want me to know about your experience?” and “I hear you.”

In Tallahassee, students demanded that lawmakers restrict sales of assault rifles. Some wore T-shirts and carried signs reading: “We call B.S.”, one of the slogans of the movement started by the survivors.

Trump also said he was open to looking at age limits, among other measures, and lamented the closure of many mental institutions that helped assess violent people.

“There’s no … middle ground of having that institution where you had trained people that could handle it and do something about it,” Trump said.

Fred Guttenberg, whose daughter was killed at Stoneman Douglas, told Republican Senator Marco Rubio of Florida at a town hall program televised on CNN on Wednesday night his comments and those of the president’s in the past week had been “pathetically weak.”

Rubio, under fire for saying the problems could not be solved by gun laws alone, said he would support a law that would prevent 18-year-olds from buying a rifle as well as a ban on “bump stocks”, an accessory that enables a rifle to shoot hundreds of rounds a minute.

Ashley Kurth, a Republican teacher who protected more than 60 people in her classroom, questioned Rubio about Trump’s proposal to arm teachers.

Rubio responded that the idea of arming teachers was wrong.

NRA spokeswoman Dana Loesch told the crowd of several thousand people the gun lobby wanted to prevent people with mental illness that make them a danger to themselves and others from getting firearms, and that authorities needed to do a better job of following up on warning signs.

“I don’t believe that this insane monster should have ever been able to obtain a firearm. This individual was nuts,” she said of the suspected school shooter.

Trump directed the Justice Department on Tuesday to work on a regulation that would effectively ban bump stocks.

The NRA opposes an outright ban on bump stocks, but has said it would be open to restrictions on them.