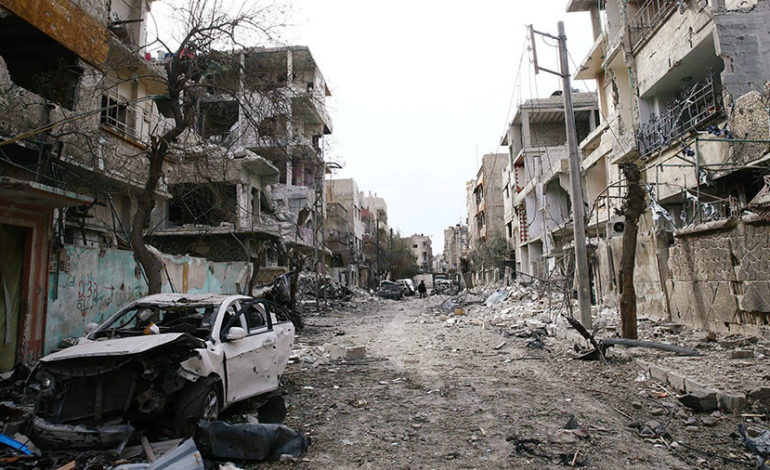 Damascus appears to be applying tried and tested military means in eastern Ghouta, combining air strikes and bombardment with ground assaults, as it did to recapture eastern Aleppo in 2016.

BEIRUT – Syrian government forces have gained ground from rebels at the edge of the eastern Ghouta region near Damascus, the Syrian Observatory for Human Rights said on Friday, in a ground assault that has continued despite a Russian plan for daily ceasefires.

The Syrian army and rebel sources could not immediately be reached for comment.

Observatory Director Rami Abdulrahman said government forces had captured the village of Hawsh Zreika in addition to Hawsh al-Zawahra, in the Maraj area at the eastern and southeastern edge of the rebel enclave.

In one of the fiercest onslaughts of Syria’s seven-year-old civil war, hundreds of people have died in 12 days of bombing of eastern Ghouta, a swathe of towns and farms outside Damascus that is the last major rebel-controlled area near the capital.

Russia, President Bashar al-Assad’s most powerful ally, has called for daily ceasefires from 9 a.m. to 2 p.m. (0700 GMT to 1200 GMT), with the stated aim of allowing civilians to leave the besieged enclave and to allow in aid.

The U.S. State Department said on Thursday that the Russian plan was“a joke”, saying people were afraid to use them because of fear of conscription, exile or death. There has been no sign of aid deliveries to the area.

At the request of Britain, which has backed the anti-Assad opposition, the U.N. Human Rights Council in Geneva is holding an urgent debate on Friday on the deteriorating situation in Syria’s enclave of eastern Ghouta.

The U.N. Security Council passed a resolution on Saturday calling for a 30-day countrywide ceasefire. But the measure has not taken effect, with Moscow and Damascus saying they are battling members of terrorist groups excluded from the truce.

Assad has steadily won back key territory from rebels with critical military backing from Russia and Iran. Damascus appears to be applying tried and tested military means in eastern Ghouta, combining air strikes and bombardment with ground assaults, as it did to recapture eastern Aleppo in 2016.

U.N. satellite analysis has shown significant damage across much of eastern Ghouta since Dec. 3, though the enclave has been subjected to regular bombardment throughout the conflict.

U.N. officials have called for the Russian plan to be expanded to allow aid deliveries and for civilians and urgent medical cases to leave.