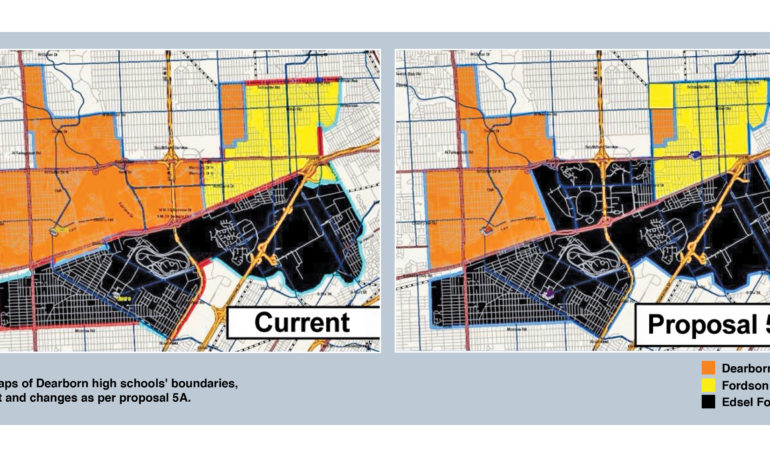 DEARBORN — A standing-room-only crowd attended the March 12 Dearborn Public School Board meeting at which the board voted unanimously in favor of boundary changes for Dearborn, Fordson and Edsel Ford High Schools.

“All new ninth graders who live within the Unis boundaries will attend Fordson High School,” according to the meeting’s agenda. “Woodworth students who live west of Greenfield between Michigan Avenue and Ford Road and East of Southfield, and Smith students who live on Nona, Park and Beech [will] attend Edsel Ford commencing with the 2018-2019 school year. Students who will be in 10th, 11th or 12th grades in the 2018-2019 school year who have a ninth grade siblings who will be attending Edsel Ford High School may choose to also transfer to Edsel Ford High School.”

A third approved proposal was for the architectural design of the addition planned for the Berry Career Center.

Parents will be notified of changes that will affect their children, board members said at the meeting.

Trustee Celia Nasser said the changes are necessary for the long term stability of the district in order to alleviate overcrowding at the high school level and specifically Dearborn High.

“We have 95 percent graduation rates; we are a state champ by Bridge Magazine; one of the top districts in the state from Mackinac Center and we had an outstanding AdvancED visit, which supports the best Interest of the students that we serve,” Nasser told The AANews. “The boundary changes are necessary in order to maintain this high level of performance and to even achieve at high levels moving forward as we prepare students for college, careers, and beyond.”

Trustee Mary Petlichkoff said she hopes there is an efficient welcoming party for the new students and their families.

There will be some resistance,” Petlichkoff said. “It’s just natural; it’s human nature to change even if the students are familiar enough.”

Petlichkoff said that she hopes there will be some sort of counseling support, especially for parents, because it can be especially difficult for them to adjust to supporting a school they may have traditionally viewed as a rival.

Trustee Mary Lane said at a previous meeting that a student who’d already been relocated into a different school said she wasn’t accepted into the new school’s community.

“We don’t want to see that happen,” Lane said. “It won’t happen. Everybody needs to be welcomed into the new schools.”

Lane said that the board has been looking at proposals since last May before they approved the proposal to change the boundaries.

During the public comments portion of the meeting students from various Dearborn high schools were among the residents who spoke.

One senior from Fordson said that while he will be leaving the district this year his siblings will remain. He emphasized that community involvement was a major reason Fordson is so successful and that adding students from outside the community may damage that cohesiveness.

The student said that if the district plans to expand programs such as the Berry Center, the board needs to properly plan and fund them. He said he participated in programs in the district that were overcrowded and underfunded, and they were significantly less successful.

One resident said he understands the board has logistical as well as financial issues, but he thought they were making the wrong decision.

“Taking kids from one side of town to the other takes them out of the their communities,” he said. He added that it makes it difficult for kids to develop relationships because they live too far from one another.

He said the overcrowding problem Dearborn Public Schools has needs to be solved by constructing a fourth high school, adding that the solution the board decided upon was a short-term fix.