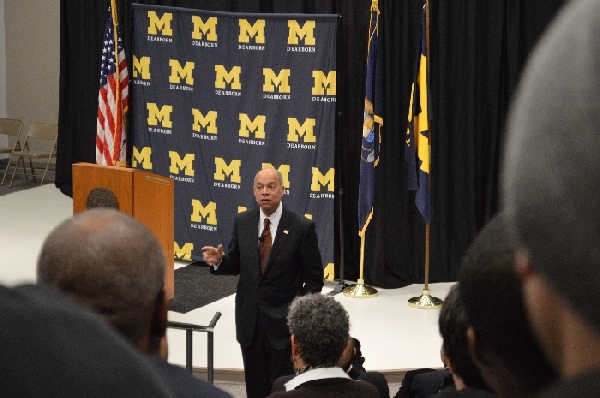 Former Homeland Security Secretary Jeh Johnson speaks about the launch of the Countering Violent Extremism (CVE) program during his visit to the University of Michigan-Dearborn, Jan 13, 2016 - Photo By The AANews

On Monday evening, I sat next to two women who are social workers in Dearborn schools and mothers to college students. We were at a community workshop held by the Dearborn Police Department, titled “Defending Against Hate Crimes and Domestic Terror Acts, and Law Enforcement and Mental Health Intervention.” Part of a Department of Homeland Security grant the Dearborn Police Department received for Countering Violent Extremism (CVE), these Community Trainings and Awareness Briefs (CTABs) will take place throughout Dearborn and Dearborn Heights.

As the presenting officer spoke about the danger of radicalization online, and the need for alert mental health professionals who could identify warning signs in young people, both women shuddered and nodded, expressing a common concern both within and without the Muslim community.

Other Dearborn groups, like Leaders Advancing and Helping Communities (LAHC) also received CVE funding, but, after public pressure from the community, declined it, citing the current political climate as a cause for concern. CVE was created in 2014 under the Obama administration, to root out “violent extremism” in the U.S. by training community and faith leaders and social service providers to identify and report the threat of “radicalization.” However, as researchers and civil rights advocates have pointed out, CVE is based on inaccurate and ill-defined theories of how radical beliefs lead to violence, and therefore justifies unfounded fear, discriminatory reporting and the targeted profiling of Muslims as a threat.

On the other hand, the threat of Muslim “extremism” is not as big as the media and the political spotlight on it makes it appear. So what happens when law enforcement equates the actual problem of hate crimes with the perceived threat of Muslim violence— and provides the same solution of community policing for both? It presents a scenario in which in order to be protected from growing anti-Muslim hate, Muslims must accept the securitization of their communities through programs like CVE, even if that means giving up their rights to privacy and playing into a narrative that criminalizes their communities.

The recent expansion of CVE programs to include other groups is used as a cover to target Muslims, as well as other historically profiled communities, including immigrants and refugees, the Black community and the LGBTQ community. If anything, programs like CVE, “Suspicious Activity Reporting” and “See Something, Say Something” increase anti-Muslim hate by feeding into a rhetoric that Muslims are inherently suspicious and prone to violence, a rhetoric that emboldens anti-Muslim hate and bias.

Psychiatrist Dr. Wesley Boyd wrote in 2016, “If the research were conducted and led to a psychological profile of someone who might ultimately commit violent acts, it would be a rough profile at best and would not have anything near perfect specificity or sensitivity— that is, it would not screen out everyone who is not at risk, nor would it screen in everyone who was, leaving us with the proverbially dangerous ‘little bit of knowledge.’”

Again based on a constructed profile that is dubious at best, community members are encouraged to assess suspicious behavior and report it to law enforcement—even when they are not sure about it.

Cases like that of Khalil Abu-Rayyan are used by police to demonstrate what is at stake with the counter-radicalization work in Dearborn. Abu-Rayyan, after months of investigation, was arrested for plotting a terrorist attack on a church in Detroit. The FBI’s investigation of Abu-Rayyan consisted of the construction of not one, but two romantic relationships between the 22-year-old and FBI informants online, to whom Abu-Rayyan (who also had a history of mental illness) eventually made statements in support of ISIS.

Abu-Rayyan’s case is not unique. In 2016, the New York Times  reported that undercover methods were the basis for 67 percent of ISIS prosecutions by the FBI. Related to CVE, this is concerning because of the growing trend of information-sharing between all levels of law enforcement, from local to state to federal. These sting operations often target young Muslim men, especially those with mental illness, for recruitment in FBI-devised terrorism plots.

Signing onto CVE is just one more step in the systemic targeting of Muslims through the use of un-tethered surveillance and informants, information-gathering and entrapment. We should be able to rely on law enforcement to protect us without sacrificing our rights to privacy, community and social services.